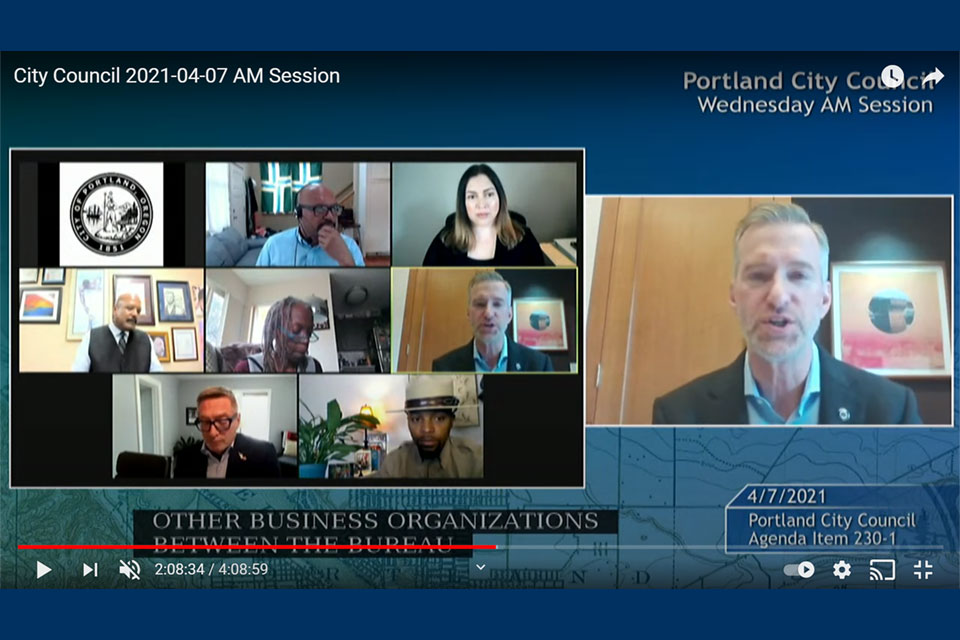 The Portland City Council voted unanimously last week to fund community-based response to the increasing levels of gun violence in the city.

At the urging of the city’s four commissioners, the city's 2020-21 budget will be amended to allocate nearly $6 million. From the general fund, the office of management and finance will receive $4.1 million, and Portland Parks and Recreation will be given $1.4 million to fill 24 new full-time positions in the park ranger program. New hires will patrol city parks but will not carry weapons. About $1 million is earmarked for grants open to community-based organizations and other programs.

Under the plan, the PPB will redirect staff by naming six assault investigative detectives and one sergeant to oversee gun-related investigations, which would be approved and assigned by the county district attorney's office. Another $200,000 will fund the temporary hiring of two full-time crime analysts.

The proposal marks a compromise after Mayor Ted Wheeler’s now-scrapped plan to give the Portland Police Bureau $2 million in increased funding for gun violence prevention.

“The $2 million is pocket change to one of the most bloated (budgets),” Sharon Gary-Smith, president of the NAACP-Portland, told The Skanner. “They’re not having to worry about absorbing cuts others have. But it’s serious money to those who are out there, on the streets, having relationships with these very disenfranchised young people.”

She added, “It’s not an ‘either-or,’ it’s a combination of best practices.

"You do your job and to tell us you can’t do your job if you don’t have more money? That’s disingenuous.”

In response to Wheeler’s initial proposal, the NAACP-Portland had released a statement that took the bureau and the Portland Police Association to task for what the organization viewed as scare tactics and the denigration of victims of police violence, including "engaging in a smear campaign wherein the PPA president attempted to leak false information against Commissioner Hardesty, the first Black woman elected to city council."

“We need to be looking at efforts that include us in arriving at better community solutions, particularly around policing and violence,” Gary-Smith told The Skanner. “(Police) have been very violent to us, in these protests and how they respond, or even how they set things up.

"They have not been the people I want to sit around a table with.

"They have not shown any desire to negotiate until you start talking about taking their money.”

During its Wednesday morning city council session last week, Wheeler, who is police commissioner, cited grave statistics of gun homicides on the rise: While the period between January and May of last year saw three such deaths, 41 people died by shooting from June to December. So far this year, the city has recorded 25 gun-related killings.

PPB's Gun Violence Reduction Team was disbanded last June in response to a public outcry over reports that the team targeted Black pedestrians and motorists at a much higher rate than any other group. But many community advocates challenge whether this has led to the uptick in violence. Last year, the United States as a whole experienced its highest gun-related death toll in over 20 years, with more than 19,000 people killed, according to the Gun Violence Archive

“I’m not putting it all on COVID, but I do know the devastation for communities of color. They were already in a pandemic before this main pandemic. There were people who were struggling, on the edge, almost losing housing -- we know that existed before COVID was officially named. And so now you’ve got young people who are on the edge, who haven't been in school since last March in any kind of form. They were in school because it was a social environment, they were there because they felt safe, so when you’ve lost that sense of connection, and you’re in struggle, it might contribute.”

In his remarks last week, Wheeler also stopped short of attributing the rise in gun-related crime to the recent redirection of police funds, instead using the occasion to acknowledge the harm wrought by racist policing policies.

“I apologize to Portlanders of color, particularly for Black and brown Portland men,” Wheeler said. “Too often, over many decades, you have been the victims of an unfair state and local law enforcement system that has mistreated you and even killed you. Again, to those who’ve been mistreated, to the loved ones of those unfairly killed, my apology on behalf of the city. It was wrong. And it must stop.”

He expressed optimism that policing and public safety would be “transformed based on our collective community values.”

“These programs are comprehensive,” she said. “Outreach workers visit hospitals after shootings, assist with funeral arrangements, support families with food and educational assistance, and work within communities in culturally responsive and trauma-informed ways that de-escalate violence. That is the path to real community safety, and exactly what kind of programs we need to invest in to reimagine public safety in Portland.”

Commissioner Mingus Mapps told The Skanner that the grant funding “will go to culturally specific nonprofits who are best suited to work with the community and bring an end to the violence.”

“I am very excited about increasing our investment in community-based organizations to intervene on gun violence,” Mapps said by email.

“The ordinance commits funds to current grantees and opens opportunities for new groups.

"The grant funding will be disbursed through the Office of Violence Prevention, (which) did a four-year study that showed that 50.8% of the victims were Black men.”

Lakayana Drury, executive director of Word is Bond and member of the Portland Committee on Community-Engaged Policing (PCCEP), gave testimony at the Wednesday session about a young Black man who had previously addressed the council about bridging the gap between police and his community. That young man, a recent high school graduate, is now on crutches and recovering from gunshot wounds, and grieving the death of a friend he was with at the time of the incident last winter.

That young man is receiving no counseling, Drury said.

“I use that as an example to show both how far-reaching it is, and also the lack of support afterwards,” Drury told The Skanner.

Drury said the “unified leadership” of city council gave him hope, and he welcomed the community-based approach over a law enforcement-centered, “tough on crime” approach.

“That being said, it’s just a first step and it can’t be the only action around it,” Drury said. “There’s a lot more that needs to happen around the core issues, around gun violence, including economics, employment, housing -- issues that we need to continue working on.”

The new ordinance requires the city’s community safety director to partner with the county and community to set a reporting schedule that will track and report outcomes of the program as a whole.

“I would like the city council to take the lead in figuring out, how do we hold ourselves accountable to this proposal?” Drury said. “What can happen is we keep creating new systems, new projects, but what are the actual results we’re looking for and how do we measure our progress on them?”

Still, many advocates expressed hope in the new approach.

“With community leaders who do deal with gang-affected and others,” Gary-Smith said, “I think that the combination of a variety of very good community investments can bring us closer to reducing this overwhelming and painful series of escalating shootings.”