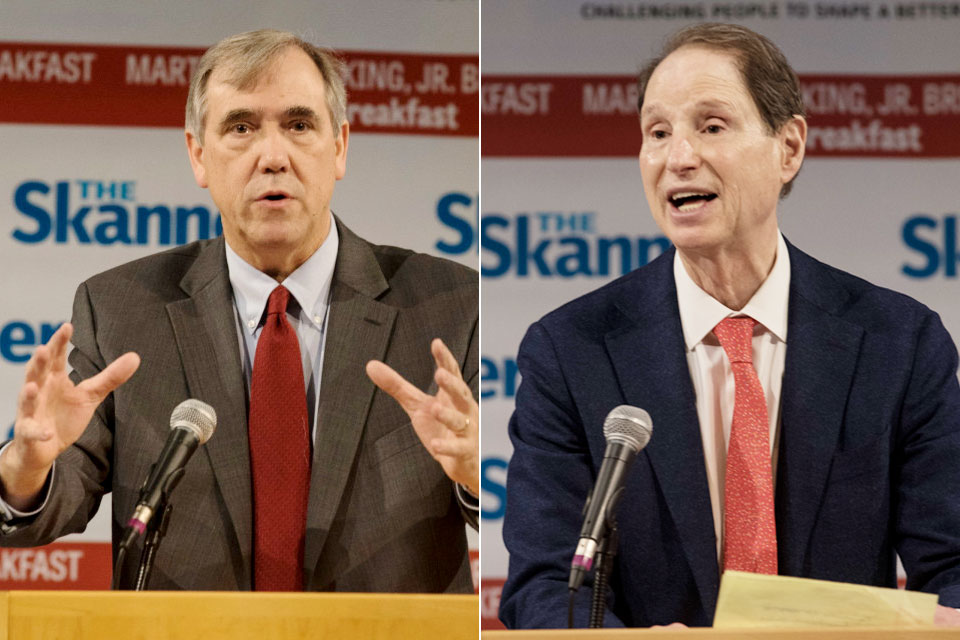 When Pres. Joe Biden signed the $1.9 trillion coronavirus relief package Friday, he enacted what Oregon Sen. Jeff Merkley called “one of the most progressive and transformative pieces of legislation since the New Deal.”

The sweeping bill, also referred to as the American Rescue Plan Act of 2021, is centered on the idea that supporting survival expenses like housing, groceries and immediate bills is key to stimulating the economy.

“From my vantage point, the effort was designed to get the strongest possible set of benefits for Oregonians,” Oregon Sen. Ron Wyden, chair of the U.S. Senate Finance Committee, said during a press conference Friday.

“For jobless aid, for small businesses, for vaccinations. And this weekend sure would have looked different without this.”

The package is projected to benefit Americans of color, who have disproportionately suffered the health and economic impacts of the pandemic.

American women, nearly three million of whom have dropped out of the workforce during the course of the pandemic, are also expected to find relief from the rescue plan’s expanded social programs and childcare provisions.

“It’s rebuilding America from the ground up -- from families and small businesses, up -- rather than from Wall Street down,” Oregon Sen. Jeff Merkley said during a press conference Friday.

He added, “The rescue plan will help us take on some of the systemic problems that have gone too long unaddressed in our country that have been laid bare for everyone to see.

Child poverty, unaffordable high costs of healthcare faced by too many middle-class Americans.”

$5 billion will come to Oregon

Not all progressive goals made it to the final draft of the stimulus package.

Liberal Democrats scrapped hopes of instituting a $15 federal minimum wage through the bill after Senate parliamentarian Elizabeth MacDonough, an unelected advisor on Senate procedure, said that the proposal wasn't allowed under the requirements of reconciliation.

Reconciliation was the path that allowed the Senate to quickly approve the stimulus bill with a simple majority of 51 votes.

If you had told me that was going to get done through the Senate Finance Committee a year ago, everybody would have thought you took leave of your senses.

Wyden said he would be introducing a bill next week to “shield relief payments from predatory debt collectors,” an item he was unable to get included in the rescue plan.

But he was pleased with what he saw as notable firsts in federal allocations.

“There’s $5 billion for Oregon overall, including a provision we were able to add that will provide a billion dollars in new payments for rural governments and tribes, and that would be a first for tribes and rural counties,” Wyden said.

The senator expressed nothing short of amazement that the bill had passed.

“If you had told me when we began that we would have the all-time record in terms of jobless assistance for folks laid off through no fault of their own,” Wyden said.

“if you had told me that for the first time tribes would be covered in terms of assistance to counties and rural communities, and that kids would be so much better off, that we would reduce childhood poverty while we helped small businesses -- our restaurants and stages -- If you had told me that was going to get done through the Senate Finance Committee a year ago, everybody would have thought you took leave of your senses.”

Facing the realities of the modern economy

Merkley hinted at a potential shift in the role of government as a result of the bill’s passage and expected impact.

“We’re going to have a lot of stories and a lot of learning as the resources hopefully hit their mark,” he said.

“I think senators are going to have problems going back to yesteryear now,” he said.

“In other words, they have seen the face of the modern economy. Oregon is not the only place that has gig workers and self-employed and independent contractors.”

Read the full text of the bill

What's in the bill?

“This last round is essentially getting into September so you wouldn’t have another crash because Congress was gone in August,” Wyden said.

Wyden expressed regret that the initial proposed weekly amount of $400 had to be lowered to appeal to more moderate members of Congress, but was optimistic that federal unemployment extensions will be more responsive to widespread job loss in the future.

“What we’ve been through over the last three weeks underscores the need to make sure that we stop lurching from one cliff to another -- basically setting these arbitrary dates, for example, for unemployment benefits -- that’ll help a politician like (Kentucky Sen. Mitch McConnell), but don’t do any good for workers. So I have proposed that we go to a new system that ties jobless benefits to economic conditions on the ground, and I think that would provide a lot more relief for the workers.”

Wyden also said he and his colleagues had proposed streamlining the unemployment administration to make it more efficient for those filing unemployment claims.

“Thousands of Oregonians felt that they were going through red tape torture being on the phone hour after hour after hour, and we are going to get that changed,” he said.

“Last Saturday night, around 1:30 a.m., I offered on behalf of Senate Democrats the unemployment provisions which included the critically important tax forgiveness provisions that otherwise would’ve hit thousands with a really nasty tax surprise,” Wyden said. He recommended those who had already filed amend their tax returns, adding that he would prefer the Internal Revenue Service simply do so automatically.

“It’s been analyzed that this will lift about half of America’s children out of poverty, so it’s a very big deal,” Merkley said, a statement supported by a report from Columbia University's Center on Poverty and Social Policy, which found nearly three million Black Americans could find stable financial footing as a result of the economic relief package.

We have 779,000 Oregon kids benefitting from expanded tax credits -- that will lower poverty 50 percent.

“We have 779,000 Oregon kids benefitting from expanded tax credits -- that will lower poverty 50 percent,” Wyden said.

In pushing to expand the benefits, Biden emphasized one in five Black and Latino households are food insecure. Last year, about 350,000 students in Oregon were eligible for the program.

One in five Black and Latino households are food insecure

The new stimulus package commits $5 billion to fund the program, and gives states the option to continue the program through summer months even when school is out of session, provided a public health emergency was declared during the previous school year.