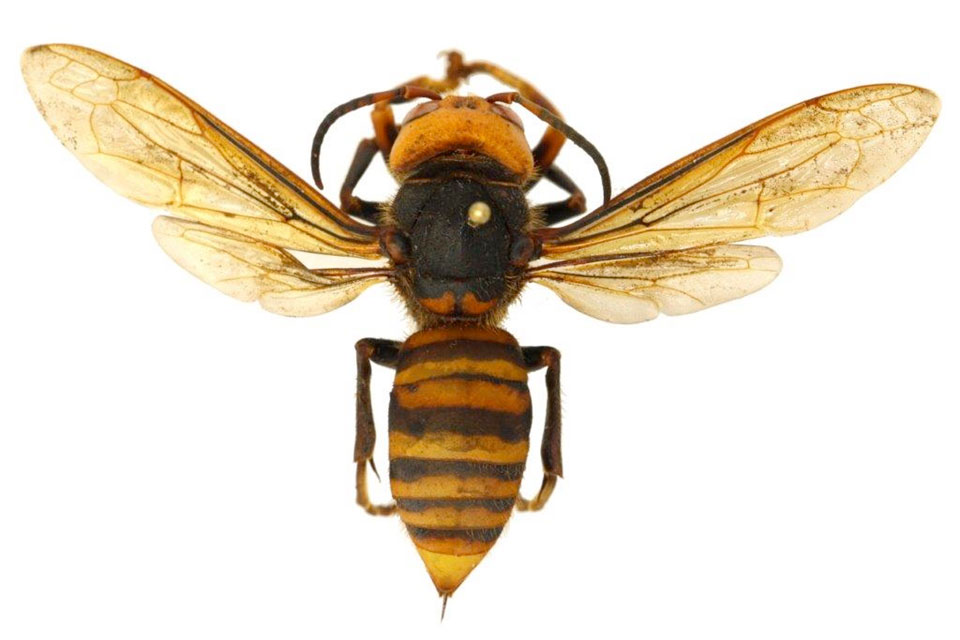 CORVALLIS, Ore. – The Asian giant hornet that garnered media attention and sparked concern last year due to its venomous sting has only been found in two spots in the Pacific Northwest, neither close to Oregon.

Despite that, the invasive hornet is a concern and residents are encouraged to keep an eye out for the hornet and report possible sightings. To help the public identify and learn more about the invasive insect, the Oregon State University Extension Service has produced the publication Asian Giant Hornet: A potential threat to honeybee colonies in Oregon.” 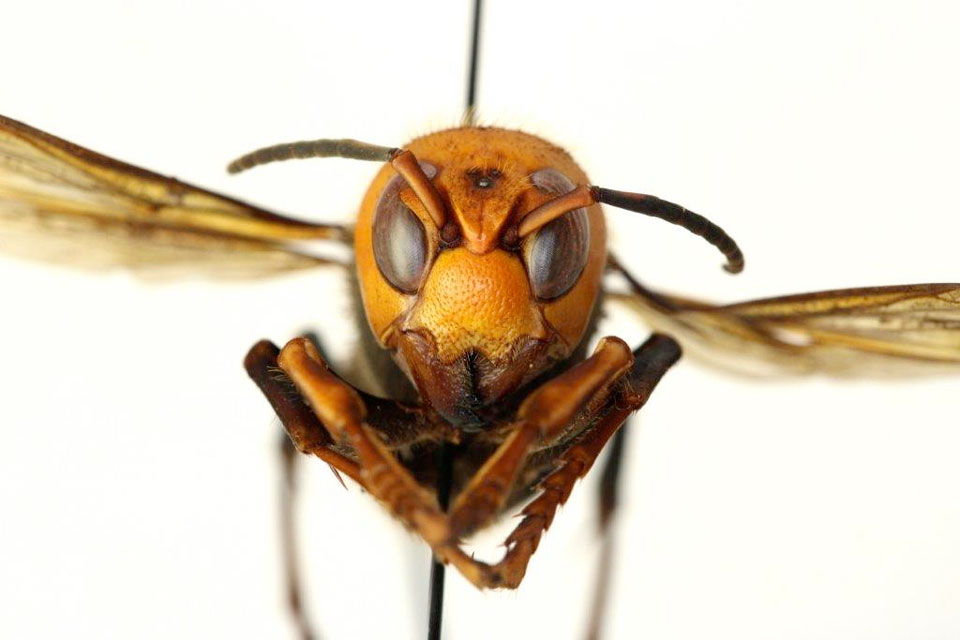 Asian giant hornet (photo/OSU)The Asian giant hornet came to light in 2019 when it was discovered at several locations across the Washington-British Columbia border, according to Andony Melathopoulos, assistant professor in OSU’s College of Agricultural Sciences and Extension pollinator health specialist. Most likely, the hornet disembarked off a freightliner from its native range in Japan, Taiwan and Korea, he said.

Though the sting is very painful, stinging is rare and rarely leads to death. An average of 30 people a year die in Japan. Though dubbed the “murder hornet” by the media, scientists prefer its real name and reassure the public that it doesn’t sting unless disturbed, much like honeybees.

“They’re not the murderous insects of horror movies that come through the cracks and take your kids away,” Melathopoulos said.

“They’re not even as aggressive as yellow jackets that hang around your backyard barbecue. Unlike yellow jackets, the hornets don’t fly around the picnic table trying to get at your food, but rather stick close to forest edges.”

The more immediate problem is the hornet’s preference for honeybees, which fuel $20 billion of the U.S. crop production annually, according to the American Beekeeping Federation. Asian giant hornets can decimate a honeybee colony in two hours.

The hornet sits outside the nest, waits for a bee to come out and decapitates it. In its native range, honeybees evolved along with the hornets and learned to fight them by luring them into the nest, surrounding them and literally cooking them to death. In the United States, bees have no defense, Melathopoulos said.

The hornet nest found in Washington was destroyed and the Washington Department of Agriculture has taken an aggressive stance against the invading insect by setting hundreds of traps, using radio-transmitted GPS to track the hornets and asking the public to help with sightings. The department is working with colleagues in Japan to determine the best way to keep the hornet from spreading.

Traps are not yet needed in Oregon, Melathopoulous said, but the public is encouraged to keep an eye out and report sightings to the Oregon Department of Agriculture, which has developed a website with updates on the hornets spread and a way to report sightings. The habitat of the Willamette Valley is perfect habitat for the hornets, which live where forests meet urban areas. They won’t likely establish in eastern Oregon because they won’t survive the cold winters.

Photos of possible hornets should be submitted to the Oregon Department of Agriculture. Photos can also be sent to Ask an Expert, an Extension question and answer service. Do not approach nests and remain a safe distance from foraging hornets to avoid being stung. 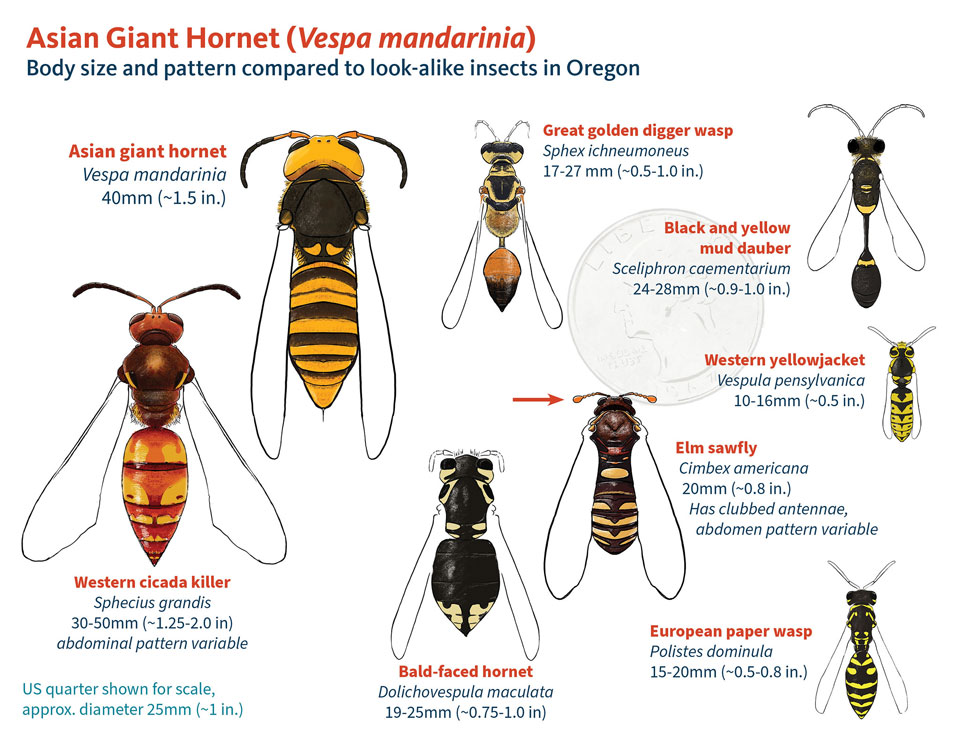 (image/Oregon State University)At 1.5 inches long with a wing span of 3 inches, the Asian giant hornet is often confused with other large insects like the western cicada killer and sawflies. But there are easy-to-spot differences.

“They are very distinct,” Melathopoulos said. “They are a very large insect, around an inch and a half in length, with a yellow-and-black striped abdomen and a big yellow head.”

Just like honeybees, the Asian giant hornet is a social insect that lives in a nest with a queen, workers and males. The queen mates in late fall and spends the winter underground. When she emerges in spring, the queen finds a suitable spot, builds a nest and lays eggs. She continues to lay eggs as workers are born and begin foraging for insects. Best-case scenario is for the Washington Department of Agriculture to find nests before the queen leaves for the winter so that no new eggs can be laid, Melathopoulos said.

Fortunately for most native bees, giant hornets begin to ramp up their foraging after the natives are done for the season. Honeybees remain active into fall, so bear the brunt of the hornet’s voracious hunger, said Melathopoulos, who encourages the public to educate themselves about the hornet, keep a look out for them and be extremely careful when trying to photograph or identify them.

“The public is a big part of making sure the hornet remains contained,” Melathopoulos said.

“They should take a minute to familiarize themselves with it by using the Extension publication and keep their eyes peeled for possible hornet introductions into Oregon.”