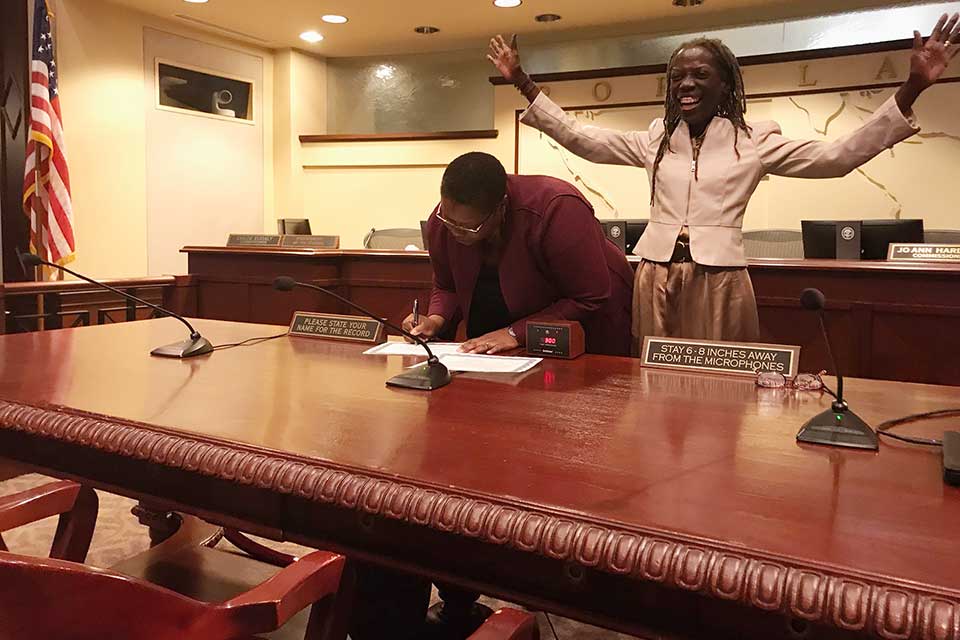 Meanwhile, Mayor Ted Wheeler announced last week there would be an independent investigation into how Hardesty came to be wrongly identified as the perpetrator of a hit-and-run traffic collision.

“It is a story that really reflects being Black in America, and how interactions with police can go really wrong really quickly,” Hardesty told The Skanner. “This is also about an illegal leak with false allegations that were given first to rightwing media types, so that it could be spread.

And so I am fortunate that I am a Black Portlander that can actually call a press conference to try to clear my name.

"Once that has been put out into the universe, and once it’s become national news, it’s going to be out there always that I was allegedly involved in a hit-and-run incident.”

Late on the night of March 3, Portland Police received a report from an individual who claimed to have been rear-ended while at a stop near Southeast 148th Avenue and East Burnside Street just before 5 p.m. that day. The complainant identified Portland City Commissioner Jo Ann Hardesty as the motorist who had caused the collision and claimed Hardesty had fled before the two could exchange contact and insurance information, as required by state law.

The following day, Hardesty held a virtual press conference to deny any involvement in the accident.

Hardesty said she had not left her home, nor driven at all, on the day of the incident. She said her Volkswagen Passat had been sitting inoperable in front of her home for the past six months due to a faulty door latch and a dead battery.

Hardesty expressed concerns not only about the false accusation but also about the manner it was quickly reported in The Oregonian earlier that day. The first Hardesty heard of the allegations was from a news reporter, she said, and not from police.

The same day The Oregonian posted the story, a group called the Coalition to Save Portland had discussed the incident report in a live Facebook chat, leading Hardesty to suspect the information had been leaked to the group from someone from within the bureau.

Later that day, police announced that Hardesty had been cleared as a suspect in the collision. Portland Police Bureau public information officer Lt. Greg Pashley confirmed to The Skanner that an investigation into the hit-and-run incident is ongoing.

Hardesty said the first time she spoke with anyone within the police bureau was Friday, when she, Wheeler, and a city attorney met with PPB Chief Chuck Lovell and Deputy Chief Chris Davis to discuss her options for redress. She was told she could request an investigation through the department's internal affairs unit, or request an independent, external inquiry.

“I was told that if I went the outside the investigator route, it may be more difficult to actually discipline anybody found wrongdoing,” Hardesty said.

“I said, I am more interested in being able to expose people by name who are involved in this behavior than I am in discipline.”

Hardesty found out Monday that her complaints and Wheeler’s had triggered an internal investigation.

“For me the investigation really needs to focus on the fact that this is not a one-off,” Hardesty told The Skanner. “This happens over and over and over again.

"We need an outside investigator to really look at the role White supremacist extremist groups play within the Portland Police Bureau.

"Again, over the last year we’ve seen really clearly the difference between how casual the police are when they’re engaged in interacting with (Proud Boy) protests, as compared to how they show up as though they’re headed to a warzone when intelligence tells them (Black Lives Matter protesters) are going to be on the street.”

A Clash of Coalitions

The Coalition to Save Portland, a young local organization whose mission statement is to increase livability and battle what members see as the city's current trend toward "lawlessness," took credit for breaking the now-debunked story, and identified the alleged victim as a teacher.

“This appears to be part of a coordinated smear campaign perpetrated by Jeff Reyolds, former chair of the Multnomah County Republican Party and rightwing media personality, as well as the Coalition to Save Portland,” Hardesty said during her press conference.

Hardesty is a longtime champion of police reform.

Coalition co-founder Gabe Johnson declined to divulge information about who had supplied his group with the police incident report.

The group remained dogged in its interest in the story, devoting much of a weekly 50-minute Friday Zoom chat to the incident, with Reynolds expressing skepticism of the police’s findings that Hardesty was not involved. The group also issued a press release that characterized Wheeler’s response as “gaslighting,” taking exception to Wheeler’s statement that accusations against Hardesty reflected a broader systemic racism that needs to be addressed.

An Attempt to Discredit?

Faced with detailed questions from the media about whether anyone else could have been operating a car in her name, Hardesty pointed out her accuser had allegedly identified her by sight.

“Let me just say, I look very distinctive, right?” she said during her press conference. “There are not a lot of people in Portland that look like me, and so when someone says that Jo Ann Hardesty did something, this is Jo Ann Hardesty.”

Hardesty told The Skanner such accusations could be especially detrimental to her position overseeing the city’s Bureau of Transportation.

“What I know is that my name specifically was used by someone who accused me of a crime, a serious crime, especially as PBOT commissioner. It would've been a serious crime without that role, but with that role it made it even more serious. The fact is that my name was allowed to spread through rightwing media outlets, who have not typically been for police reform, before finally at the end of the day on Thursday the police came out with a press release. And I can tell you, there are people who don’t even believe the police press release that exonerated me from that activity.”

Hardesty said the past week had taken a toll on her staff and on her personally, calling the experience “exhausting.”

“But it became less about me, and just about how often this happens to Black people, Indigenous people, and people of color in the city of Portland,” Hardesty said.