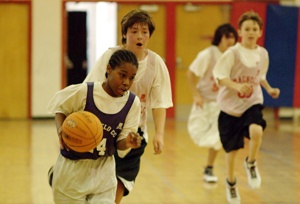 Garfield Community Center guard Jalon Wright, brings the ball down the court in the Seattle Department of Parks and Recreation 2008 Youth Basketball championship game for 11 year-olds in the bronze division. They were playing against Magnolia Community Center. Garfield had an 8-1 record during the regular season but lost to Magnolia 43 to 36. Thirty games were played by both boys and girls, ages 10 to 17 during the 2008 Youth Basketball Championship Games, held March 27 through March 30 at several locations including Meadowbrook Community Center and Nathan Hale High School.