Innocent, But Not Yet Free 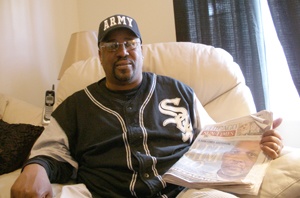 Sitting in his North Portland home, far from the mean streets of Chicago, Eugene Logan vividly remembers the moment he heard his brother Alton had been arrested. Eugene was stationed overseas – he had been for four years – when he learned that Alton Logan had been accused of killing a security guard during an attempted robbery.
"I was serving in the Army when I got a call saying that my brother had been arrested," Eugene told The Skanner. "I couldn't believe it."
Neither could his mother, her best friend, his brother Tony and a family friend who were at home with Alton Logan during the time of the robbery.  A few neighbors were present when two men robbed the McDonalds on the south side of Chicago – which was two blocks away from the Logans' home — killing a security guard and wounding another. They knew Alton and they knew he wasn't one of those men. Tony Logan even woke his brother up that night to inform him the restaurant had been robbed.
But 26 years ago, jurors believed the testimony of three people, who had picked Alton's photograph out of a group shown to them by police, over that of family members. Several other witnesses to the crime refused to go to court and testify that he was not the killer. So despite the absence of any physical evidence tying him to the scene of the crime,  Alton Logan was sentenced to life in prison.
He has remained adamant about his innocence – a claim that is now backed up by a recently unsealed confession by convicted cop killer Andrew Wilson. A month after the McDonalds robbery, Wilson told his two defense attorneys he was the shooter. The attorneys – William Jameson Kunz and Dale Coventry – made a signed affidavit of the confession and sealed it in a lock box, to be released only after Wilson's death.
Because of attorney-client privilege, Kunz and Coventry couldn't say a thing. And because of their silence, and an investigation many call hopelessly botched, an innocent man has spent nearly half his life behind bars. 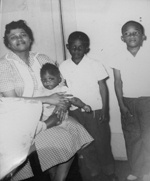 Eugene Logan admits his brother had been in trouble – that's how he was caught up in the neighborhood suspect sweep to begin with. Because of Alton's arrest record, investigators used him in a lineup of felons from the immediate area. Several eyewitnesses fingered him as the shooter. But that was about all the evidence prosecutors and police had linking Alton with the crime.
Edgar Hope, the other man convicted for the robbery and murder, said he didn't know who Alton Logan was, and he ordered his attorney to try and shed light on Wilson's involvement. Eugene Logan says even the police probably had some idea that Alton wasn't their man.
Andrew Wilson was arrested one month after the robbery for a different crime. He confessed to killing two Chicago police officers. But his confession was made under torture, so in 1993 he was awarded more than $1 million in a civil suit against the Chicago Police Department.
According to a report by Human Rights Watch, torture and brutality were systematic in Chicago, although no officers were ever prosecuted.
Eugene Logan says it's hard to believe a man receiving electric shocks and radiator burns wouldn't have spilled his guts about the McDonalds robbery. The shotgun used in the McDonalds robbery was also found in Wilson's home – evidence that might have called into question the credibility of the witnesses.
Studies have repeatedly illustrated the fallibility of eyewitnesses. Researchers have found that without knowing they are doing so, witnesses can create false memories based on their own biases and impressions introduced by third parties. According to a Stanford Law School article by Laura Engelhardt, false images and ideas can become part of a memory, even if they never happened.

Before he went to prison Alton Logan was a fun-loving guy, his brother Eugene says. He loved playing card games; he took care of his mom.
"He had a good heart," says Eugene. "But I don't know how it's going to be when he gets out."
In an interview with "60 Minutes," Alton seemed bitter about spending the last 26 years in prison for a crime he didn't commit. But who wouldn't be? Eugene says his brother is mostly sad about all the opportunity that has been lost.
"That's when he feels bitterness," he says.
During his time in prison, Alton missed out on falling in love or starting a family. He missed the Logan family's annual Fourth of July party every year for 26 years, a party his mother always organized. He even missed his mother's funeral.
"Him not being there … a piece of her wasn't there," Eugene says. "A piece of her was always missing."
Alton almost always managed to call from behind the walls of Stateville Correctional Center in Joliet, Ill. during the family reunions. But hearing a loved one's voice is not the same as having them with you. There would be no hugs, no family meals, no shared jokes … nothing for 26 years.
"It's hard to put a monetary figure on that," Eugene says about trying to get compensation for his brother's lifetime behind bars.
Despite this great injustice, Eugene says he still has faith in the criminal justice system, even if he doesn't trust many of its players.
"It failed us because of some crooked cops," he said. "That's who I actually blame. …They could just claim they took another felon off the streets."
Ironically, Alton's incarceration brought unintentional benefits to Eugene. The neighborhood "bad boys" who bounced in and out of prison gave Eugene respect because of his brother. The streets of Chicago are no place to appear weak, Eugene said. He too was tempted several times to go down a path that could have lead to prison, but meeting inside the walls of Stateville wouldn't have been the kind of reunion either brother would have liked, Eugene said.
"It was a place he didn't want to see me." 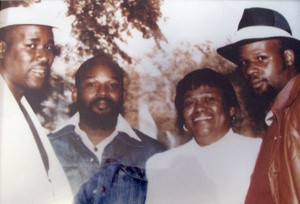 For nearly two and a half decades, Eugene thought about his brother every day. When he was still living in Chicago, he would make the trip out to Joliet about five or six times a year to talk with Alton. It was difficult for the brothers, but Alton showed tremendous strength. He never cried, which gave his brother strength to carry on without him.
There was hope in the beginning; hope that the truth would come out, that the real perpetrator would be discovered. But hope dissipates over time, and after the first five or six years, Eugene gave up on his hope that his brother would ever see freedom again.
"I felt like he'd be there until he died," he said. "I had to just accept that."
As for his brother, Eugene said he saw a change in the way he acted over time.
"Whatever it was, his spirit changed," he said. "It made him real humble."
Eugene said his brother began to realize that he had to live for himself. The one person who couldn't accept what had happened to Alton was his mother. A fierce grief took hold of her and left its bitterness inside her. Eugene believes it eventually manifested as cancer.
"The cancer went on and eventually killed her," he said. "She couldn't handle it. She did everything she could do for Alton."

Alton Logan is still in jail. Despite Andrew Wilson's confession, despite the fact that the weapon was found in Wilson's possession, despite the accumulation of evidence linking him to the crime and exonerating Alton Logan, it's still not clear when — or even if — Alton will be released. A court hearing is scheduled for April 18, which could mean a new trial, or his release. Eugene Logan is optimistic.
"Now everything's going to be all right," his brother said. "My city is behind him."
Eugene holds up a copy of the Chicago Sun-Times. His brother's picture takes up the entire front page and the words "Let Him Go" stand out in large font.
"These are fighting words," he said. "The world knows this man is innocent."
Once Alton is released, Eugene said the first thing he wants to do is get both his brothers, visit his mother's grave and have a picnic lunch. After that, Eugene has a lot of ideas – travel the country or the world, live together in Portland. Alton told Eugene he wants to come live with him here in Portland and turn his garage into a woodshop.
"If we have to keep our cars outside, that's fine," Eugene says with a smile.
But Eugene knows Alton has a lot of living to catch up on, and despite offering up his home to his oldest brother for the next 26 years, it's possible Alton will have ideas of his own. After all, it's been 26 years since he's known any kind of freedom.
"The worst thing in the world is for someone's freedom to be taken away," he said.