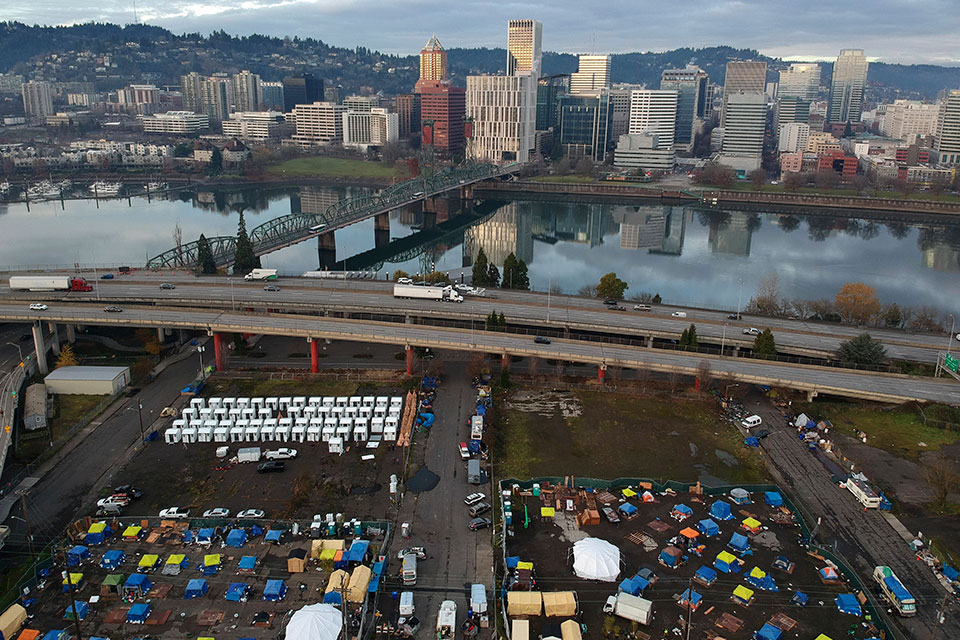 By The Skanner News
Published: 24 December 2020 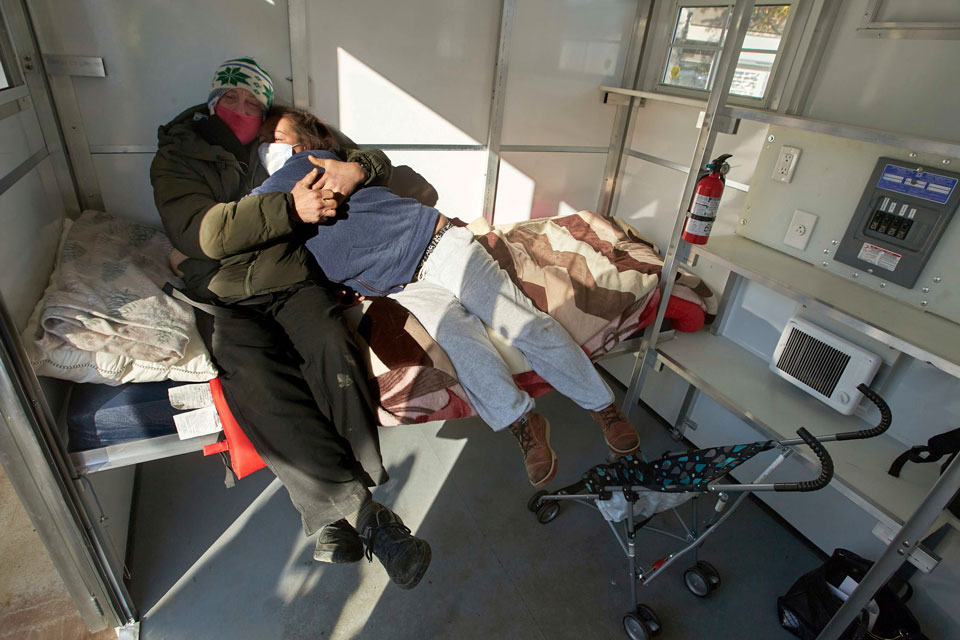 Chris Foss, left, and Tiecha Vannoy embrace after moving into a new pod setup by the city in the Old Town district in Portland, Ore., Tuesday, Dec. 8, 2020. (AP Photo/Craig Mitchelldyer)PORTLAND, Ore. (AP) — After three years on the streets, Tiecha Vannoy and her boyfriend Chris Foss plan to weather the pandemic this winter in a small white “pod” with electricity, heat and enough room for two.

“We just get to stay in our little place. We don’t have to leave here unless we want to,” said Vannoy, wiping away tears as they moved into the shelter near a downtown train station. "It’s been a long time coming. He always tells me to have faith, but I was just over it.”

The pandemic has caught homeless service providers in a crosscurrent: demand is high but their ability to provide services is constricted. Shelter operators who already cut capacity to meet social distance requirements face new stresses with winter looming. Coming in from the cold can now mean spending a night in a warehouse, an old Greyhound bus station, schools or an old jail.

And people experiencing homelessness face difficult choices. Many are hesitant to enter the reduced number of spaces available to escape the cold for fear of catching the virus. 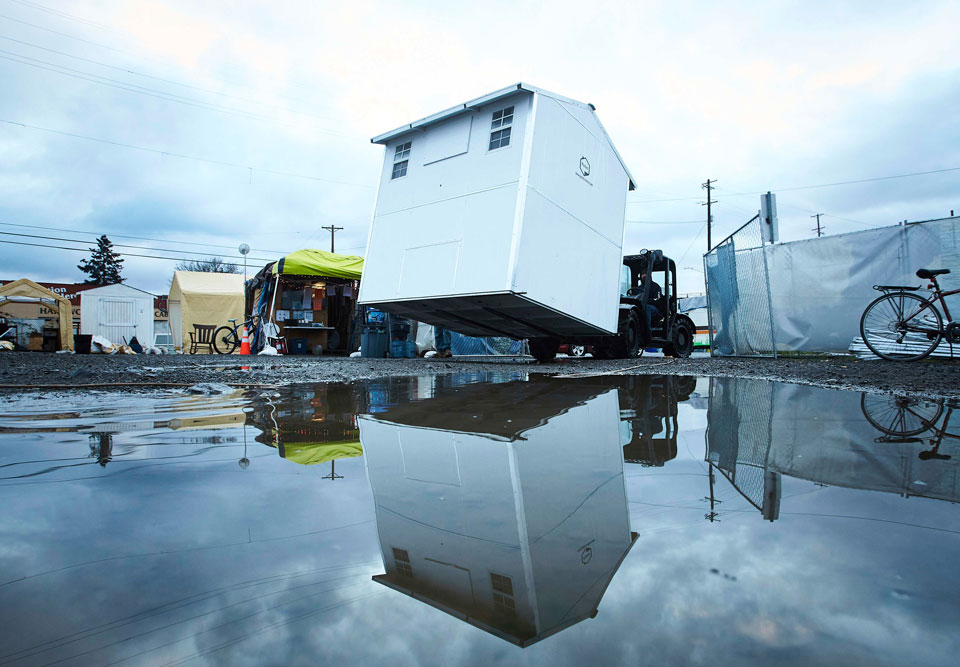 Crews from Pallet move new pods into a homeless camp in Portland, Ore., Wednesday, Dec. 9, 2020. (AP Photo/Craig Mitchelldyer)By some projections, coronavirus cases will increase into January, when longer cold snaps tend to increase demand for shelter. With the extension of a federal eviction moratorium that ends Dec. 31 in limbo, housing advocates predict up to 23 million Americans could lose their housing.

In Troy, New York, Joseph’s House and Shelter is renting 19 rooms in an old convent for a seasonal shelter. The Poverello Center in Missoula, Montana, cut its capacity by half in April and scrambled to add 150 socially distant beds at a new winter shelter in a warehouse. Portland opened new shelters in a former Greyhound bus station and an unused jail and is renting out 300 rooms at six motels in addition to the 100 pods.

Pallet, the company that makes the 64- or 100-square-foot pods, said it has provided 1,500 beds to cities and towns across the U.S. since the pandemic began. 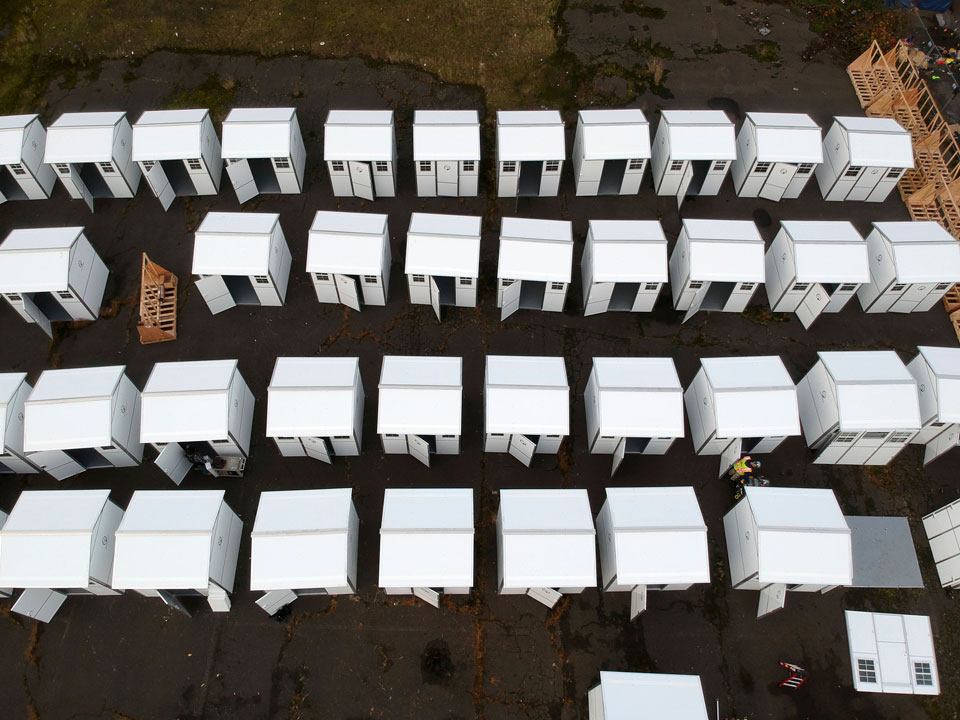 In this aerial photo taken with a drone, pods to be used in homeless camps are constructed in Portland, Ore., Tuesday, Dec. 8, 2020. (AP Photo/Craig Mitchelldyer)Vannoy and Foss were terrified to stay in crowded shelters and worried about the safety of collecting used soda cans for change. Charities they’d relied on for hot lunches, free clothes and warm showers closed. At one point, Foss went a month without changing clothes. Now, they have a safe space.

“People just locked themselves in the house, I get it," Foss said of the sudden dearth of services. “But it really made it dirty and nasty and you really had to put your own instincts for survival into high gear.”

Many localities are using federal CARES Act money to increase winter shelter options for people amid COVID-19 — and some say the solutions provide a glimpse of what would be possible with more consistent, long-term funding. 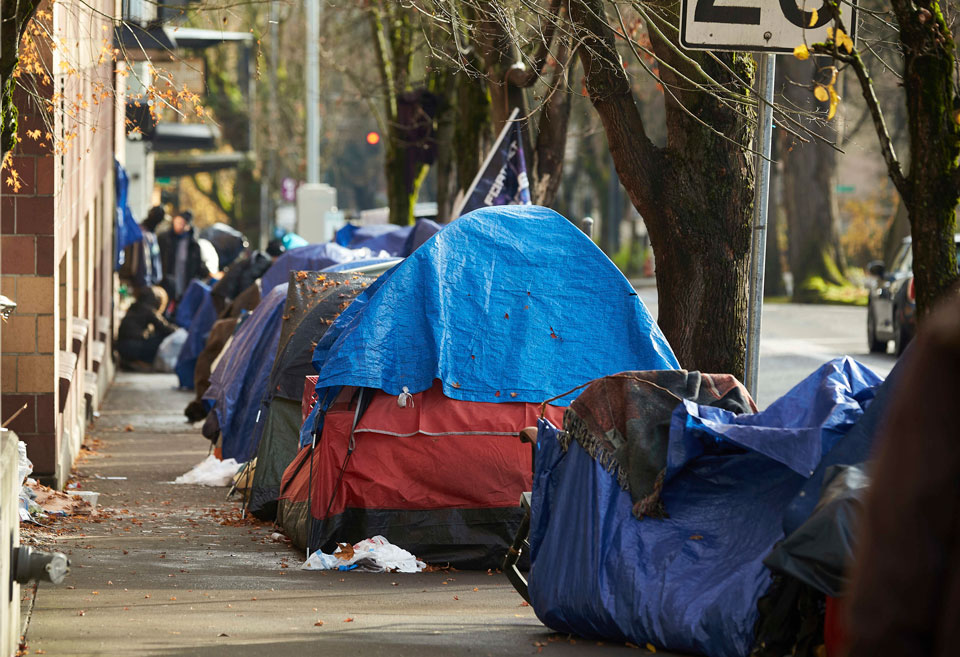 Tents line the sidewalk on SW Clay St in Portland, Ore., Wednesday, Dec. 9, 2020. (AP Photo/Craig Mitchelldyer)Portland is paying $1 million a month to rent the motel rooms for homeless people at high-risk of COVID complications. In Delaware, a former 192-room Sheraton Hotel purchased for $19.5 million by New Castle County for use as an emergency shelter opened last week.

“There’s something a little poetic about taking a pretty nice hotel and putting the most vulnerable individuals up in those hotels to see if we can transition them to something different," said County Executive Matt Meyer.

In Ithaca, New York, advocates have expanded outreach to encampments and other places where people are sheltering. 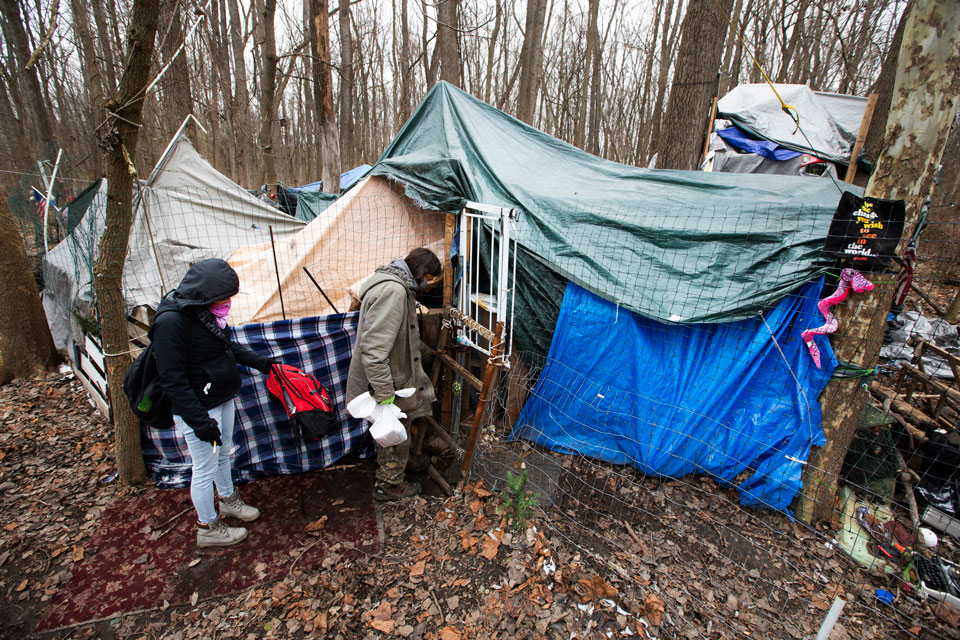 Jose Ortiz unlocks the gate to the residence he built in the homeless encampment known as the Jungle on Monday, Dec. 7, 2020, in Ithaca, N.Y.. His friend Tas'a Towsley is with him. (AP Photo/John Munson)When Jose Ortiz tested positive for the coronavirus last month, he was able to isolate at his elaborately crafted shelter in “The Jungle,” a patch of woods on the city’s outskirts where dozens of people settle in tents and more permanent structures. Advocates brought him food, water, a propane heater and cough drops as they kept tabs on him, said Deb Wilke, homeless crisis alleviation coordinator at Second Wind Cottages.

“This is my home, so this is where I want to be,” Ortiz said outside his camp, complete with a tarp-covered “treehouse” built waist-high off the ground, “and they were pretty good at making sure that I had whatever I needed.” 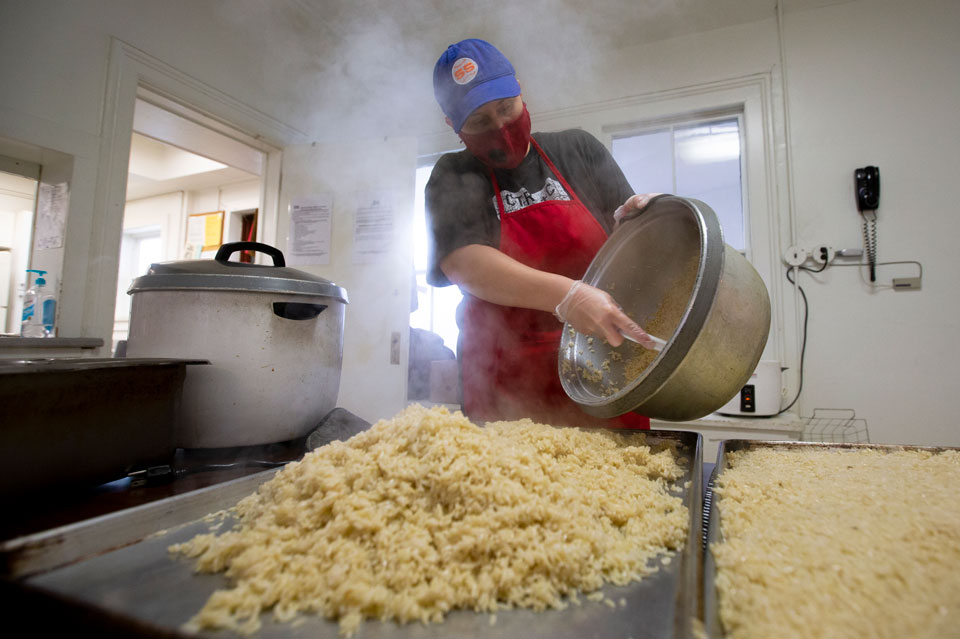 “I think it’ll be a bit more work trudging through snow on top of mud,” said REACH community health worker Matt Dankanich, who makes regular rounds through the wooded encampment with a nurse. He can connect people with doctors and other providers through encrypted video calls.

Still, despite masks and distancing, outbreaks have hobbled some operations.

An outbreak that started during Thanksgiving at the Union Gospel Mission in Portland eventually sickened 18 people in transitional housing. As a result, the organization temporarily closed its doors, stopped daily meal distribution, shut down its thrift shop and briefly shuttered another winter shelter. The mission has since rebounded and is preparing to serve more than 1,000 Christmas meals.

In Missoula, coronavirus outbreaks have sent one-third of The Poverello Center’s staff into quarantine twice already. Meanwhile, the motel purchased by the city for shelter is full nearly every day, said executive director Amy Allison Thompson.

In Ithaca, Ortiz's health has improved. Others in the encampments are expected to seek shelter in the city when temperatures become bone-chilling. But he's reluctant to leave behind his “cozy” place in the woods.

“All my things are here. My home is here,” he said. “So it’s hard for me to just pick up and leave.”

If someone outside is unsheltered and you are concerned they could be in danger due to cold weather, call 9-1-1 and request a welfare check. To help someone locate shelter and for transportation to shelter, please call 2-1-1 or go online at 211info.org.