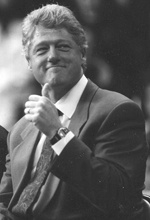 MEDFORD, Ore. (AP) -- A spokesman for Hillary Rodham Clinton's presidential campaign says former President Bill Clinton's weekend visit to Southern Oregon is a prelude to an appearance from the candidate herself.
"She will be campaigning aggressively all over Oregon, including campaigning aggressively in Southern Oregon," said Isaac Baker, the spokesman.
But first things first. Bill Clinton will rally Democrats Sunday afternoon at Hedrick Middle School in Medford and then head to Central Oregon for a visit Monday.
Baker said Bill Clinton likely will hold a town hall meeting in which he will take questions from the audience. The event in Bend is expected to have a similar format. Bill Clinton continued his Oregon visit Monday with appearances Monday, March 31 at 9:30 a.m. at OHSU, Old Library Auditorium, 3181 S.W. Sam Jackson Park Road; at 11 a.m.. at the Cherry Blossom Center, 740 S.E. 106th Ave.; and in Salem from 1:30 to 3:30 p.m. at Chemeketa Community College, building 50, 4000 Lancaster Drive N.E.; and in Bend from 5 to 7 p.m. at Bend Senior High School, 230 N.E. Sixth St.
The visit is generating excitement from Democrats, who are outnumbered in Southern Oregon.
Carol Marcus of Ashland signed up to volunteer at Democratic headquarters on Friday. Getting Hillary Clinton elected has become her cause.
"If she doesn't get elected, I will slit my throat," she said.
Exit polls throughout the election season have shown Clinton doing well with older women. Marcus, 85, said she doesn't find any appeal in Barack Obama, who has attracted most of the young voters.
"I think he's a big liar," she said. "He promises apple pie in the sky."
Though Jackson County traditionally votes Republican, there was a large turnout to see Obama speak in Medford last week.
Paulie Brading, chairwoman of the county Democratic Central Committee, said the attention Obama and Clinton are giving to Jackson County underscores that times might be changing.
"It shows me directly that this is a swing county," she said. "It sends a signal."
But Bryan Platt, chairman of the Jackson County Republican Central Committee, said a large turnout to catch a glimpse of a national political figure is not a sign that the region is set to deviate from its traditional voting patterns. He said conservatives are turned off by Obama and Clinton.
"Jackson County is Republican country," he said.