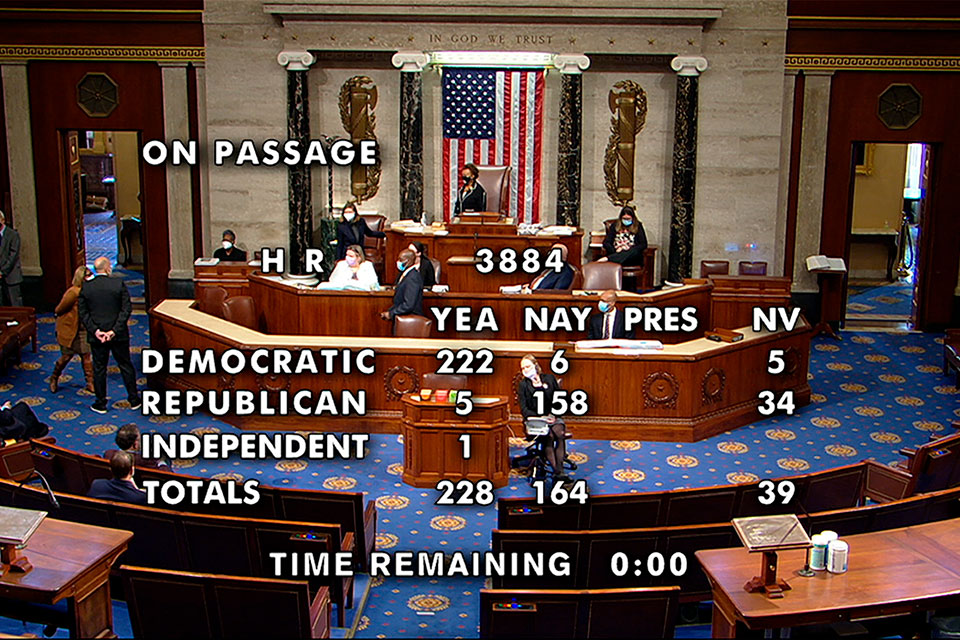 By The Skanner News
Published: 04 December 2020

WASHINGTON, D.C. — Today, the U.S. House of Representatives passed the Marijuana Opportunity Reinvestment and Expungement (MORE) Act, legislation supported by U.S. Rep. Earl Blumenauer (D-OR) to end the federal prohibition of cannabis and ensure restorative justice for those impacted by it.

Although cannabis will soon be legal in 15 states for adult use and in 36 states for medical use, it remains criminalized at the federal level, destroying hundreds of thousands of lives and wasting billions of dollars on the selective enforcement of an outdated and harmful system. Today’s historic vote – the bill passed the House 228 – 164 – marked the first time a full chamber of Congress voted to end this prohibition.

"I have worked on this issue for 47 years,” Blumenauer, co-chair of the Congressional Cannabis Caucus, said on the House floor on Friday, prior to the final vote.

“We’re here because we have failed three generations of Black and Brown young people, whose lives can be ruined, or lost, by selective enforcement of these laws. This legislation will end that disaster.

"It's time for Congress to step up and do its part. We need to catch up with the rest of the American people.”

The continued enforcement of cannabis prohibition laws results in over 600,000 arrests annually, disproportionately impacting people of color who are almost four times more likely to be arrested for cannabis possession than their white counterparts, despite equal rates of use across populations. Too often, cases of low-level cannabis possession escalate to police violence. For many, the selective enforcement of cannabis prohibition becomes a matter of life and death.

People of color have also been historically targeted by discriminatory prosecution and sentencing practices. Black men receive drug sentences that are 13.1 percent longer than sentences imposed for white men. Latinos are nearly 6.5 times more likely to receive a federal sentence for cannabis possession than non-Hispanic whites. Once released, people of color often continue to be robbed of their dignity, as having a felony conviction can impact the ability to get an education, secure gainful employment, or vote.

The MORE Act centers racial justice by decriminalizing marijuana at the federal level and enacting other policies, including:

The MORE Act also centers economic justice by ensuring that people of color are not shut out of the emerging regulated cannabis marketplace and reinvesting in communities most impacted by prohibition.

Legal cannabis sales totaled $9.5 billion in 2017 and are projected to reach $23 billion by 2022. However, fewer than one-fifth of cannabis business owners identify as minorities and only approximately four percent are Black. One reason for this gap is the historically disproportionate arrest and conviction rates that make it particularly difficult for people of color to enter the legal cannabis marketplace.

In order to address inequalities in the legal cannabis marketplace and ensure equal participation in the industry, the MORE Act supports:

The full text of the legislation (H.R.3884) is available here.