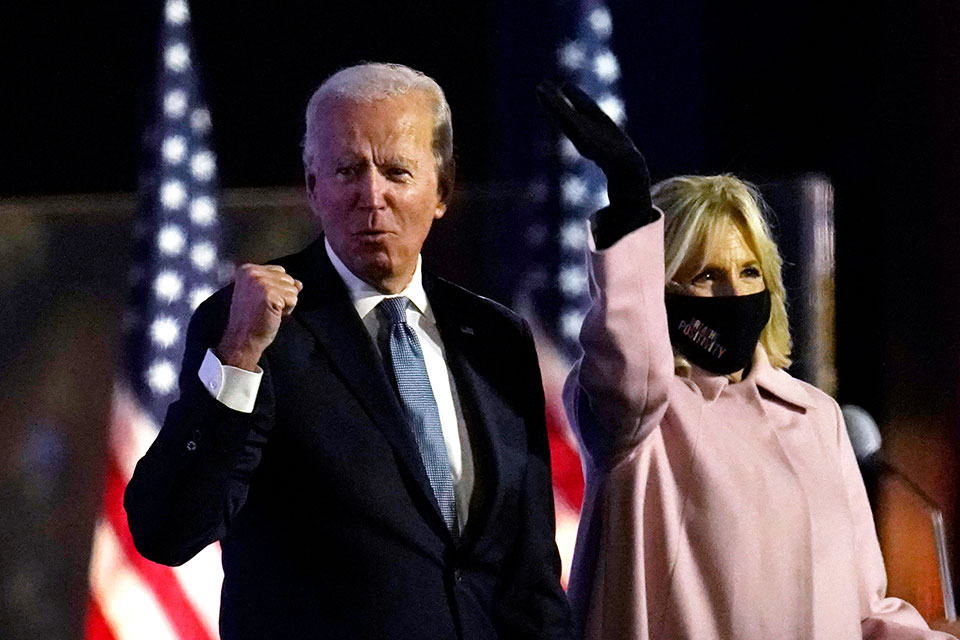 WASHINGTON (AP) — The fate of the United States presidency hung in the balance Wednesday morning, as President Donald Trump and Democratic challenger Joe Biden battled for three familiar battleground states — Wisconsin, Michigan and Pennsylvania — that could prove crucial in determining who wins the White House.

It was unclear when or how quickly a winner could be determined. A late burst of votes in Wisconsin gave Biden a small lead in the state, but it was still too early to call the race. Hundreds of thousands of votes were also outstanding in Michigan and Pennsylvania.

The high stakes election was held against the backdrop of a historic pandemic that has killed more than 230,000 Americans and wiped away millions of jobs. Both candidates spent months pressing dramatically different visions for the nation’s future and voters responded in huge numbers, with more than 100 million people casting votes ahead of Election Day. 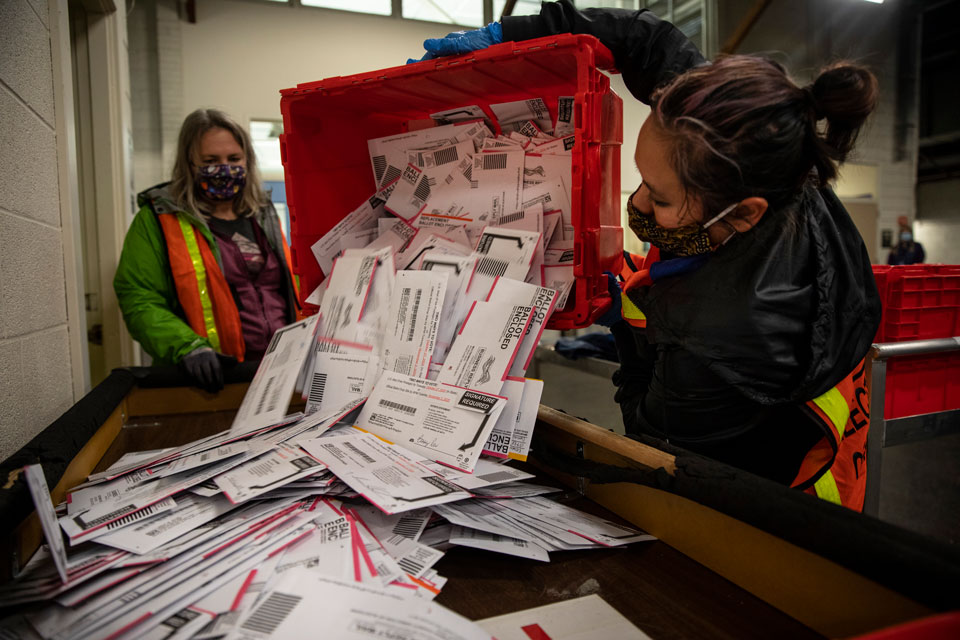 Election worker Kristen Mun from Portland empties ballots from a ballot box at the Multnomah County Elections Division, Tuesday, Nov. 3, 3030 in Portland, Ore. Oregon is the first state in the nation to institute voting by mail and automatic voter registration. (AP Photo/Paula Bronstein)But by night's end, the margins were exceedingly tight, with the candidates trading wins in battleground states across the country. Trump picked up Florida, the largest of the swing states, while Biden flipped Arizona, a state that has reliably voted Republican in recent elections. Neither cleared the 270 Electoral College votes needed to carry the White House.

Trump, in an extraordinary move from the White House, issued premature claims of victory and said he would take the election to the Supreme Court to stop the counting. It was unclear exactly what legal action he might try to pursue.

Biden, briefly appearing in front of supporters in Delaware, urged patience, saying the election "ain’t over until every vote is counted, every ballot is counted.”

“It’s not my place or Donald Trump’s place to declare who’s won this election,” Biden said. “That’s the decision of the American people.” 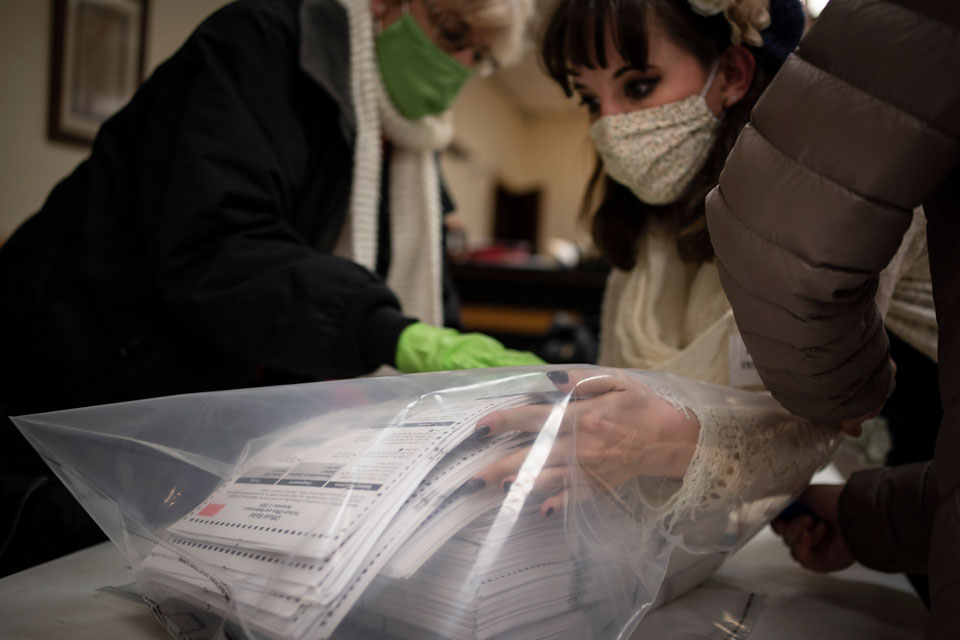 Election staff members pack ballots after polls closed at the Moose Lodge on Election Day, Tuesday, Nov. 3, 2020, in Kenosha, Wis. (AP Photo/Wong Maye-E)Vote tabulations routinely continue beyond Election Day and states largely set the rules for when the count has to end. In presidential elections, a key point is the date in December when presidential electors met. That’s set by federal law.

Several states allow mailed-in votes to be accepted after Election Day, as long as they were postmarked by Tuesday. That includes Pennsylvania, where ballots postmarked by Nov. 3 can be accepted if they arrive up to three days after the election.

Pennsylvania Gov. Tom Wolf tweeted that his state had over 1 million ballots to be counted and that he “promised Pennsylvanians that we would count every vote and that’s what we’re going to do."

Trump calls for counting to stop

Trump appeared to suggest those ballots should not be counted, and that he would fight for that outcome at the high court. But legal experts were dubious of Trump's declaration. 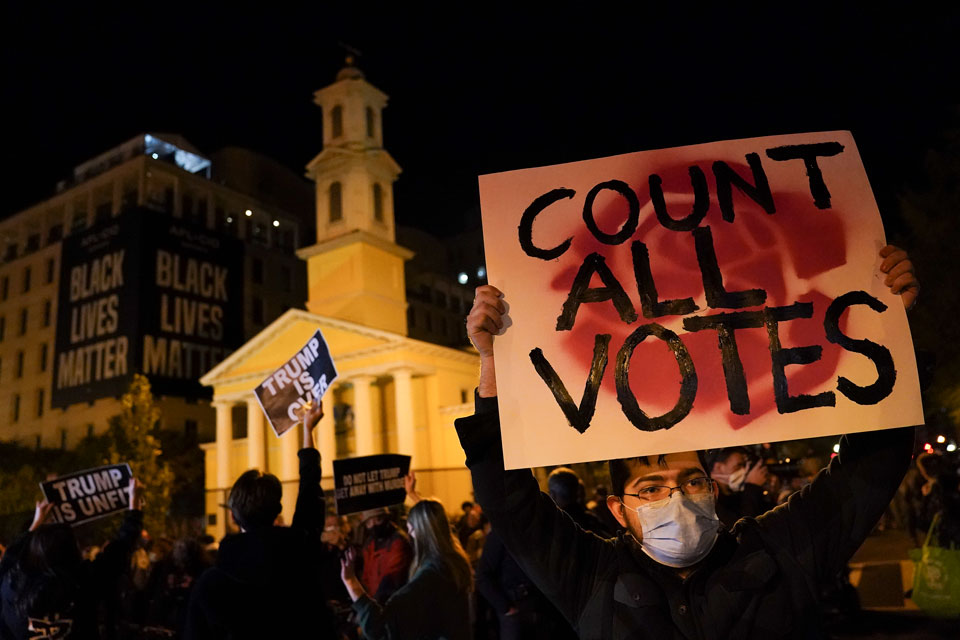 A demonstrator holds up a sign while waiting for election results at Black Lives Matter Plaza, Tuesday, Nov. 3, 2020, in Washington. (AP Photo/John Minchillo)“I do not see a way that he could go directly to the Supreme Court to stop the counting of votes. There could be fights in specific states, and some of those could end up at the Supreme Court. But this is not the way things work,” said Rick Hasen, a professor of law and political science at the University of California-Irvine.

Trump has appointed three of the high court's nine justices including, most recently, Amy Coney Barrett.

Democrats typically outperform Republicans in mail voting, while the GOP looks to make up ground in Election Day turnout. That means the early margins between the candidates could be influenced by which type of votes — early or Election Day — were being reported by the states.

Throughout the campaign, Trump cast doubt about the integrity of the election and repeatedly suggested that mail-in ballots should not be counted. Both campaigns had teams of lawyers at the ready to move into battleground states if there were legal challenges. 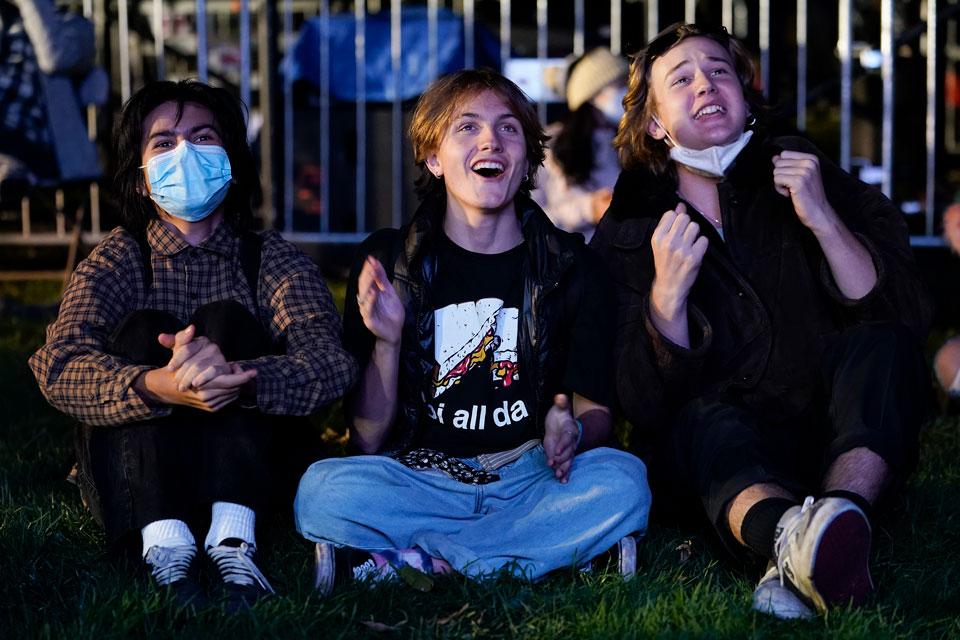 From left, Niki Gotzev, Milo Shea and Ryan Thomas, all of the District of Columbia, react to local election results, Tuesday, Nov. 3, 2020, in Washington. (AP Photo/Jacquelyn Martin)The tight overall contest reflected a deeply polarized nation struggling to respond to the worst health crisis in more than a century, with millions of lost jobs, and a reckoning on racial injustice.

Trump kept several states, including Texas, Iowa and Ohio, where Biden had made a strong play in the final stages of the campaign. But Biden also picked off states where Trump sought to compete, including New Hampshire and Minnesota. But Florida was the biggest, fiercely contested battleground on the map, with both campaigns battling over the 29 Electoral College votes that went to Trump.

The president adopted Florida as his new home state, wooed its Latino community, particularly Cuban-Americans, and held rallies there incessantly. For his part, Biden deployed his top surrogate — President Barack Obama — there twice in the campaign’s closing days and benefitted from a $100 million pledge in the state from Michael Bloomberg.

Democrats entered the night confident not only in Biden's prospects, but also in the party's ability to take control of the Senate. But the GOP held several seats that were considered vulnerable, including in Iowa, Texas and Kansas. The House was expected to remain under Democratic control.

The coronavirus pandemic — and Trump’s handling of it — was the inescapable focus for 2020.

For Trump, the election stood as a judgment on his four years in office, a term in which he bent Washington to his will, challenged faith in its institutions and changed how America was viewed across the globe. Rarely trying to unite a country divided along lines of race and class, he has often acted as an insurgent against the government he led while undermining the nation’s scientists, bureaucracy and media.

The momentum from early voting carried into Election Day, as an energized electorate produced long lines at polling sites throughout the country. Turnout was higher than in 2016 in numerous counties, including all of Florida, nearly every county in North Carolina and more than 100 counties in both Georgia and Texas. That tally seemed sure to increase as more counties reported their turnout figures.

Voters braved worries of the coronavirus, threats of polling place intimidation and expectations of long lines caused by changes to voting systems, but appeared undeterred as turnout appeared it would easily surpass the 139 million ballots cast four years ago.

No major problems arose on Tuesday, outside the typical glitches of a presidential election: Some polling places opened late, robocalls provided false information to voters in Iowa and Michigan, and machines or software malfunctioned in some counties in the battleground states of Ohio, Pennsylvania, Georgia and Texas.

The cybersecurity agency at the Department of Homeland Security said there were no outward signs by midday of any malicious activity.

With the coronavirus now surging anew, voters ranked the pandemic and the economy as top concerns in the race between Trump and Biden, according to AP VoteCast, a national survey of the electorate.

The survey found that Trump’s leadership loomed large in voters’ decision-making. Nearly two-thirds of voters said their vote was about Trump — either for him or against him.