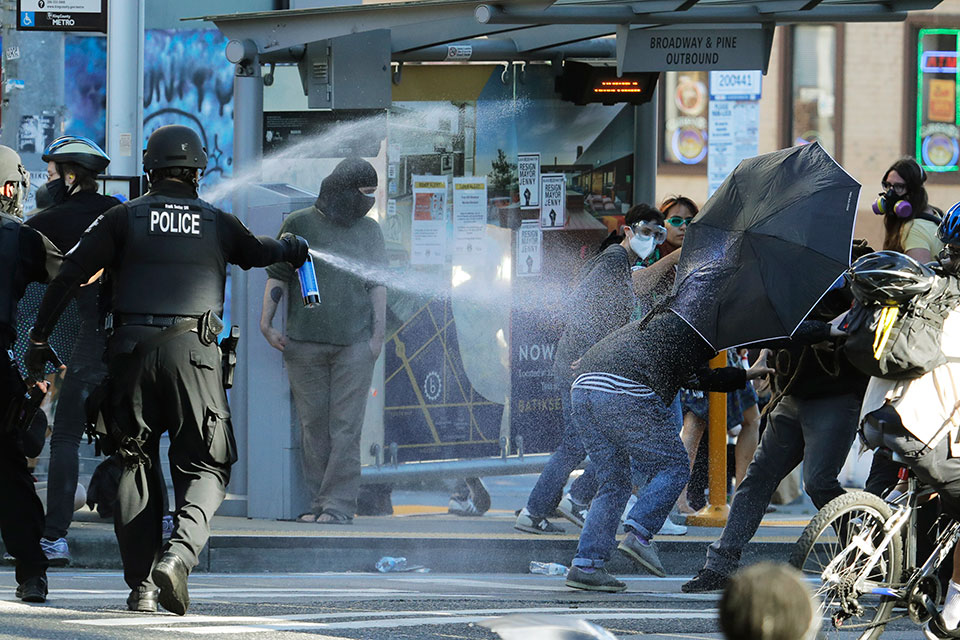 SEATTLE (AP) — A Seattle police officer who slammed a protester's head to the ground, another who punched a demonstrator in the head a half dozen times and a third officer who put his knee on the necks of two looting suspects violated policies against using excessive force, an independent agency tasked with investigating police misconduct said Friday.

But an officer who pepper-sprayed a protester, hitting a nearby child in the face, did not intentionally target the boy or his father, so no violations of policy took place, the Office of Police Accountability said in its report.

Protests erupted in Seattle and across the country this summer after George Floyd was killed by a Minneapolis police officer. Since May, the office has received 19,000 complaints about police misconduct during protests. The office has released two batches of reports with the latest made public Friday. 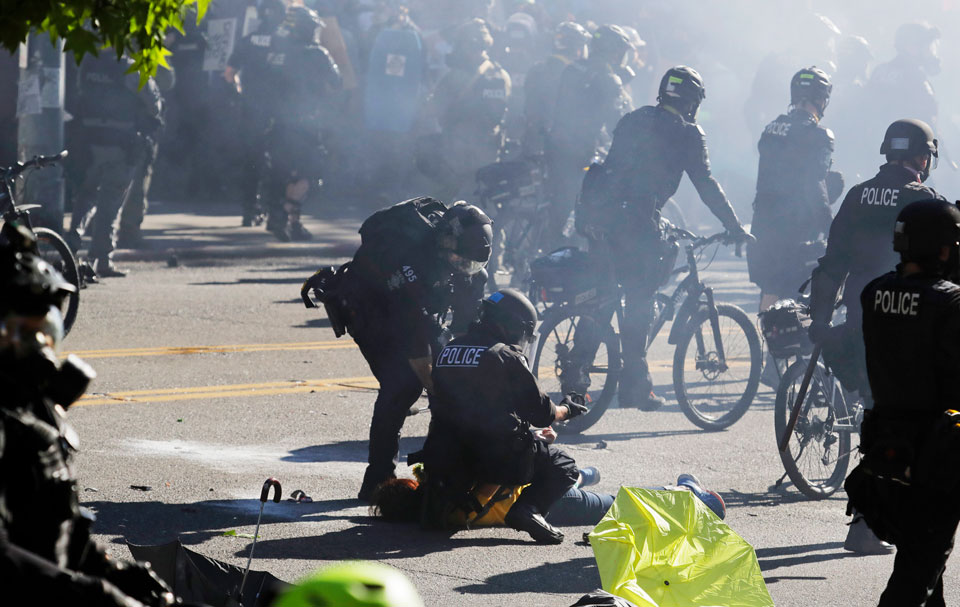 In this July 25, 2020, file photo, police arrest a person, during a Black Lives Matter march and protest near Seattle Central College in Seattle. The Office of Police Accountability, an independent agency tasked with investigating police misconduct, said on Friday, Oct. 23, 2020, that in other incidents than the one pictured here, a Seattle police officer who slammed a protester's head to the ground, another who punched a demonstrator in the head a half dozen times and a third officer who put his knee on the necks of two looting suspects violated policies against using excessive force. (AP Photo/Ted S. Warren, File)The Seattle police chief has not made any decisions about disciplining the officers, said Mark Jamieson, a police spokesman. The officers were not named in the reports because the union contract with the city prohibits disclosing their identities.

The system is 'flawed'

Also under the contract, when the Office of Police Accountability believes an officer committed a crime, the office sends the case to the Seattle Police Department and asks for a criminal investigation — a system that the office's director, Andrew Myerberg, said is flawed because of a possible conflict of interest.

Myerberg said his office has referred three or four cases from the protests to the Seattle police for a criminal investigation, but those reports have not been made public yet. None of the officers in the newly released reports face criminal charges, he said.

Nancy Talner, the ACLU of Washington's senior staff attorney, said the investigations are a start, but more work must be done to ensure bad behavior is changed.

“Incidents like these must immediately spark meaningful system changes, including requiring policies that prevent unnecessary use of force and demanding compliance at every step of an officer’s career," she said.

The Seattle Community Police Commission said disciplinary decisions for officers who used excessive force are being made under a flawed system created by the current police contracts. The contacts make it hard to fire a problem officer, allow guilty officers to appeal their case to a backlogged arbitration system, and keep the disciplinary cases closed to the public, the commission said.

The Seattle Police Officers Guild has said it was appalled by the death of Floyd in Minneapolis and has pledged to work on improving police-community relations. The union has also criticized what it called “criminal agitators” in protests “who continue to attempt to provoke police.”

The Office of Police Accountability vowed to handle the flood of complaints that came in during the summer's protests as quickly as possible. One batch of five cases went out on Sept. 18, and the second batch on Friday.

One case involved an arrest of a combative protester on May 29 who refused to leave a closed street. As the officers tried to arrest the man, he hit back with a water bottle, the report said.

Officer 'failed to modulate his force'

Investigators said officers used appropriate force as they got the man to the ground, but “the six to eight punches used by the other officer were excessive, particularly because he failed to modulate his force as the threat subsided,” the report said.

Another complaint was filed by a protester who said she suffered bruising, swelling and a cut on her face after an officer twice shoved her head onto the street on June 7.

Investigators said officers were trying to break through a line of protesters who wouldn't leave a closed street, so they grabbed one woman and got her face down on the ground.

Investigators said the protester wasn't resisting arrest and the officer was nearly twice her size, yet he repeatedly shoved her head down, which resulted in her injuries.

The accountability office received more than 13,000 complaints after a child attending a protest was hit in the face with pepper spray. A viral video of the May 30 incident shows the 8-year-old boy crying and screaming while another person pours milk down his face to ease the sting.

Investigators used officer body-camera videos and witness interviews to determine whether the boy and father were targeted by the officer, as the father claimed.

As tensions mounted that night, officers declared the protest an “unlawful assembly” and began pushing demonstrators back. Some locked arms and one woman moved forward yelling, “no, you move back," the report said

She grabbed an officer's baton while another officer fired pepper spray at her. She ducked, and the child and father, who were standing behind her, were also hit.

The accountability office determined the force used by the officer was lawful and proper.

Officer puts his knee on their necks

The agency came to a different conclusion in its investigation of an officer who held two different suspects on the ground by putting his knee on their necks on May 30. That happened on the second night of protests against police brutality.

The Seattle officer told investigators he didn't intend to put his knee on the looting suspect's neck, but video shows he did.

The officers were responding to reports of looting at the T-Mobile store. An officer stopped one suspect and had him on the ground when a second officer came over to help. While trying to handcuff the suspect, the second officer put his knee on the suspect's head and neck area.

As another suspect ran from the store, that officer grabbed him and pulled him to the ground. People standing nearby yelled for the officer to take his knee of the suspect's neck. At that point, the other officer reached over and moved the officer's knee from the neck.

Investigators said the force used by the officer was “neither necessary nor proportional under the circumstances.” Although his knee was on the suspect's neck for about 13 seconds and did not appear to impair his breathing, the officer's actions were “inconsistent with policy and training,” investigators said.