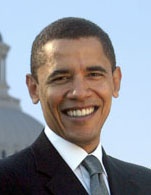 MEDFORD, Ore. (AP) -- Democratic presidential hopeful candidate Sen. Barack Obama took his message of changing the old partisan politics to a conservative corner of Oregon on Saturday.
Hundreds of supporters stood in a line stretching more than 200 yards in the early morning cold to get good seats for the town hall meeting.
Recreation technician John McKellig, 54, and retired postal worker Arlene Aron, 60, both from the rural community of Applegate, showed up at 9:30 Friday night to be first in line.
"I'm interested in seeing the red state-blue state division disappear," said McKellig, who left the Republican Party and became a Democrat in 2000 after the election of President Bush. "I think we need to heal."
Terry Baker, 27, a forester recently graduated from Yale University and also from Applegate, said he was not closely following the campaign until he read Obama's speech on the need to overcome racism.
"That one speech really did it for me," he said.
Inside, some 1,500 ticket-holders crowded a former bowling alley converted into a kids' gym to ask the candidate about the economy, environmental protection, veterans benefits, stem cell research and how he manages to stay composed under the stresses of the campaign.
As Obama stood with his arms crossed over his chest, retired Air Force Gen. Merrill "Tony" McPeak, who graduated from nearby Grants Pass High School, chastised former President Bill Clinton for remarks taken to question the candidate's patriotism.
"As one who for 37 years proudly wore the uniform of our country, I'm saddened to see a president employ these tactics," said McPeak. "He of all people should know better because he was the target of exactly the same kind of tactics.
The Clinton campaign has rejected the charges, saying the former president merely meant to underscore the need to keep the presidential race focused on issues.
Obama drew his loudest applause when he pledge to get U.S. troops out of Iraq in 2009 and to give veterans the health care they need for post-traumatic stress disorder, brain injuries and other problems.
On the environment, the senator pledged to let science rather than politics guide decisions and said his first priority would be dealing with global warming with a cap-and-trade system of reducing greenhouse gas emissions.
His message was convincing for motorcycle magazine editor Bart Madsen, 30, of Central Point, and his wife, community health educator Autumn Chadbourn, 27, who are expecting a daughter to be born in May.
"I wasn't sure about his experience. He's young," said Madsen as he left. "Pretty much everything he said I found myself thinking, 'Yeah, that's where I'm at.' "
Southern Oregon has long been conservative politically, though not necessarily Republican.
When Democrat John F. Kennedy was running for president in 1960, he rode as grand marshal in the back of a Lincoln convertible in the annual Pear Blossom Parade in Medford, the region's commercial center.
His brother, Robert F. Kennedy, made a speech in front of City Hall in 1968 just days before he was assassinated in California.
In those days, conservative Dixiecrats were still strong in a region where the Ku Klux Klan once thrived. The civil rights movement and the Reagan revolution drew many of them to the Republican Party, which now dominates voter registration rolls and presidential voting.
Since the collapse of the timber industry in the 1980s and 1990s in the face of federal logging cutbacks to protect the northern spotted owl, the region has seen greater economic dependence on health care and home construction, fueled by the influx of retirees. Construction has slumped since the mortgage crisis hit, but not so much as in other parts of the country.
Les Aucoin, a political blogger and former Democratic congressman from Oregon now living in Ashland, has endorsed Obama and said Friday he thought the Illinois senator's message would be well received here.
"I think his message is resonating with lunch-pail voters more than conservatism has been for the last several years," AuCoin said. "The change I see in Southern Oregon is first of all among conservative Democrats who were Reagan Democrats and even independents. Just an incredible fear of bailouts for Wall Street banks while their own personal security is crumbling. It may cost them their house and retirement, and they are feeling very vulnerable."