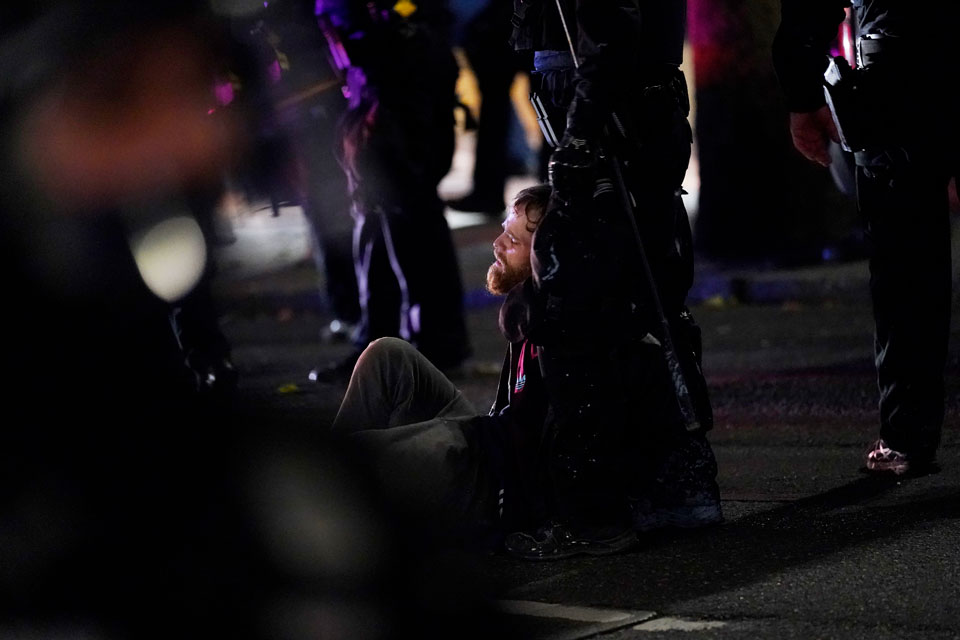 The governor said in a series of tweets Sunday evening that she was committed to building trust in the community. She asked Oregon State Police Superintendent Travis Hampton, Multnomah County Sheriff Mike Reese and Portland Police Chief Chuck Lovell to take another look at what happened during their joint operations that night.

Journalists and law enforcement officers have difficult jobs to do during these demonstrations, but I do still believe that we can protect free speech and keep the peace.

“Journalists and law enforcement officers have difficult jobs to do during these demonstrations, but I do still believe that we can protect free speech and keep the peace,” Brown tweeted.

Videos from the demonstration in downtown Portland showed police grabbing a news photographer and pushing him to ground as he was trying to document them tackling and detaining a person on a sidewalk, The Oregonian/OregonLive reported. Freelance photographer John Rudoff was wearing a helmet with “PRESS” stickers affixed to it. He told the outlet on Sunday that he’s “physically OK but am quite annoyed.”

This reporter is pushed into a tree pic.twitter.com/mXP5Ar1pLN

One video appears to show an officer push a journalist into a tree, causing the journalist to drop the camera. Oregon Public Broadcasting Editor Anna Griffin retweeted the video, writing, “I’d also love to hear elected officials explain why a reporter from my organization was subject to violence at the hands of law enforcement when judges have made it very clear this is not acceptable.”

Another online video showed an officer apparently deploying a chemical spray in the face of a man who was yelling at police and waving a sign toward them.

The American Civil Liberties Union of Oregon late Sunday called on Brown to appoint a special, independent prosecutor to investigate and prosecute police abuses that have occurred in Portland over the last several months.

Several arrests were made and an unlawful assembly was declared overnight after objects were thrown at officers, including full drink cans, firecrackers and rocks, authorities said. One man broke away from officers and ran two blocks with his hands in zip-tie cuffs before he was recaptured by police. Police also seized bear spray, a baton and a drone in separate stops or arrests.

Sheriff’s spokesperson Chris Liedle told The Oregonian/Oregon Live that anyone who believes officers acted unjustly or excessively can file a complaint with the agency or corresponding review board.

Nearly nightly protests have gripped Portland since the police killing of George Floyd in Minneapolis in May.