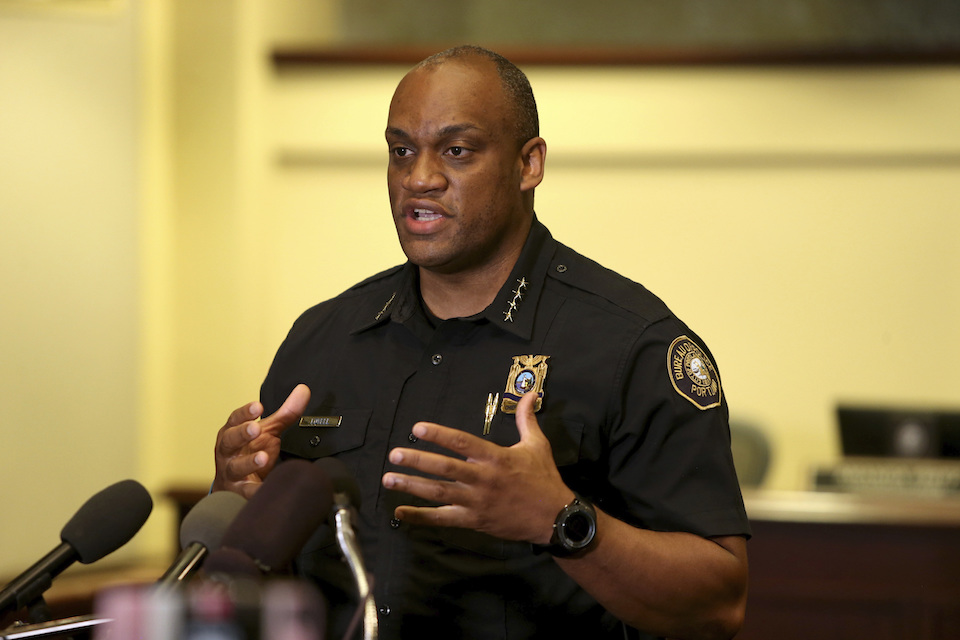 PORTLAND, Ore. (AP) — At least several thousand people are expected in Portland, Oregon, on Saturday for a right-wing rally in support of President Donald Trump and his “law and order” reelection campaign as tensions boil over nationwide following the decision not to charge officers in Louisville, Kentucky, for killing Breonna Taylor.

The Proud Boys, a group that has been designated as a hate group by the Southern Poverty Law Center, described it as a free speech event to support Trump and the police, restore law and order and condemn anti-fascists, “domestic terrorism" and “violent gangs of rioting felons" in the streets.

Oregon Gov. Kate Brown on Friday said she was sending state troopers to help the Portland police and was creating a unified command structure among city, regional and state law enforcement — a tactic that essentially circumvents a city ban on the use of tear gas as a crowd-control measure. The state police said a “massive influx” of troopers would be in Portland by Saturday morning.

“This is a critical moment. We have seen what happens when armed vigilantes take matters into their own hands. We’ve seen it in Charlottesville, we’ve seen it in Kenosha and, unfortunately, we have seen it in Portland,” she said, referencing deaths in Virginia, Wisconsin and Oregon during clashes between those on the right and left of the political spectrum.

“The Proud Boys and Patriot Prayer groups have come time and time again looking for a fight, and the results are always tragic. Let me be perfectly clear, we will not tolerate any type of violence this weekend," said Brown, a Democrat. "Left, right or center, violence is never a path towards meaningful change.”

The Proud Boys are self-described “Western chauvinists” and they have held multiple events in Portland since Trump's election alongside other right-wing groups such as Patriot Prayer that often end in violent clashes with left-wing counter-demonstrators.

Last month, a Trump supporter and Patriot Prayer follower was shot and killed after some vehicles in a pro-Trump car caravan diverted into downtown Portland and crossed paths with left-wing activists.

Right- and left-wing demonstrators fought in the streets, and some members of the caravan fired paintballs and bear spray at counter demonstrators. The suspect in the shooting. a self-described anti-fascist, was killed the following week by law enforcement as they tried to arrest him in Washington state.

Similar clashes in 2017, 2018 and 2019, have resulted in violence and unrest and a massive deployment of law enforcement.

The Proud Boys mentioned the death of Trump supporter Aaron “Jay” Danielson in their permit application, as well as Kyle Rittenhouse, the 17-year-old charged in the shooting deaths of two Black Lives Matter protesters in Kenosha, Wisconsin.

Rittenhouse's attorneys have said he was acting in self-defense. The Proud Boys raised the specter of a vigilante response to the actions of a “mob” in a permit application filed with the city this week.

“The lawlessness has culminated with the assassination of our friend and Trump supporter Jay Danielson in Portland," the Proud Boys wrote in their application.

“Portland leadership is unwilling to stop the violence. They have been blinded by their hatred of our President and will not allow outside help stopping the violence.”

“For the past three years, our community has repeatedly had to deal with rallies of this kind, in which participants travel to our city threatening ‘takeovers,’ touting their ‘combat unit’ capacity, and openly bragging about the waste of City resources that they can provoke," he said.

“We are unified and strong, and we will use every available power and resource of our city government to protect free speech and our community from violence.”

Police have canceled all scheduled days off for officers Saturday and will primarily be focused on keeping dueling groups of protesters separated.

Deputy Chief Chris Davis acknowledged that Oregon is an open-carry state for firearms. But he reminded those attending the rally and counter-demonstrations that under Portland law, it's illegal to carry a loaded firearm in public without an Oregon concealed handgun permit.

Officers will patrol for weapons and check for permits as needed, he said.

“We ask that you come peacefully and engage in your free speech peacefully,” Police Chief Chuck Lovell said.

“It’s OK for us to disagree about things. But at the end of the day, doing so peacefully, letting people exercise their rights safely is very important. So that’s my ask the folks who are attending.”

The rally comes as Portland approaches its fifth month of almost nightly protests against racial injustice and police brutality.

Demonstrators want the city to take millions from the police budget and reallocate it to support the Black community. Some also are angry with the mayor — who is also the police commissioner — for allowing police to use tear gas until recently and for what they call overly aggressive police tactics.

Wheeler has also refused to cede control of the police bureau to a Black city councilwoman with a decades-long resume of activism around police reform.

Groups of between 100 and 300 demonstrators frequently set small fires, smash windows and hurl fireworks and rocks at police officers in the early morning hours and have targeted police precincts and other city and county government buildings.

This week, protesters hurled three firebombs at police officers as tensions escalated in the wake of a Kentucky grand jury's decision not to charge officers with killing Taylor, a Black woman who was fatally shot in her home by officers conducting a drug investigation.

The continuous unrest has drawn the attention of Trump, who has repeatedly attacked Wheeler for not stopping the violence.

For a two-week period in July, thousands of protesters squared off with federal agents sent by Trump from the U.S. Department of Homeland Security to protect a federal courthouse in downtown Portland that was a focus of the demonstrations.