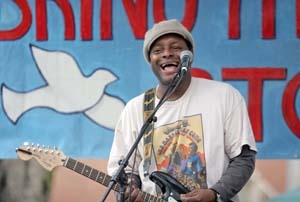 Musician Barry Hampton of Triple Grip played at the Portland Peace Rally on Saturday afternoon. Portlanders gathered in the south park blocks to protest the War in Iraq, now entering its sixth year. Almost 4,000 U.S. members of the military have died since the invasion in March of 2003. It is estimated that about 90,000 Iraqi civilians have died. See Iraq War article on this page.