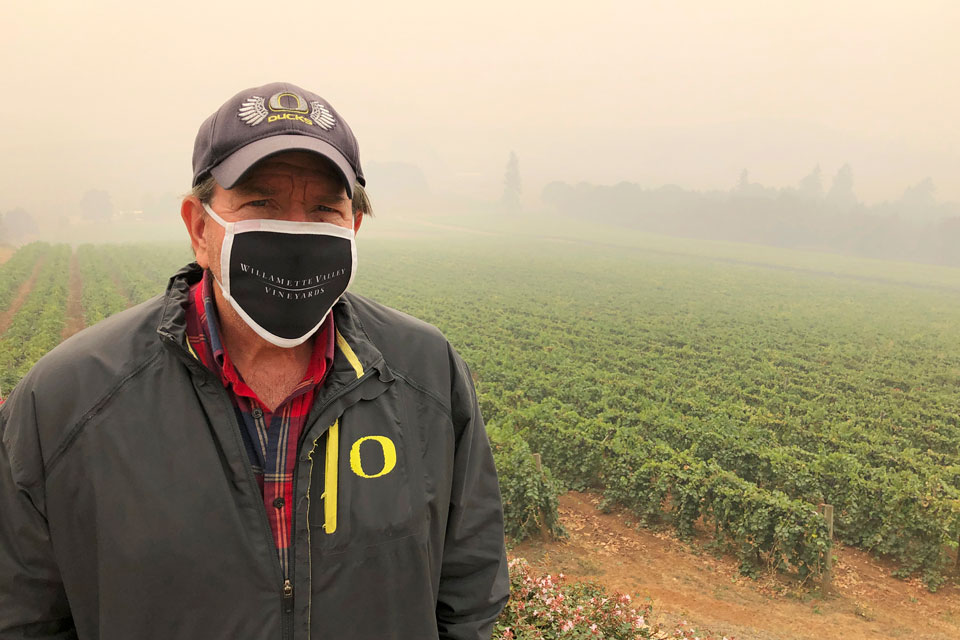 TURNER, Ore. (AP) — Smoke from the West Coast wildfires has tainted grapes in some of the nation's most celebrated wine regions with an ashy flavor that could spell disaster for the 2020 vintage.

Wineries in California, Oregon and Washington have survived severe wildfires before, but the smoke from this year's blazes has been especially bad — thick enough to obscure vineyards drooping with clusters of grapes almost ready for harvest. Day after day, some West Coast cities endured some of the worst air quality in the world.

No one knows the extent of the smoke damage to the crop, and growers are trying to assess the severity. If tainted grapes are made into wine without steps to minimize the harm or weed out the damaged fruit, the result could be wine so bad that it cannot be marketed.

The wildfires are likely to be "without question the single worst disaster the wine-grape growing community has ever faced,” said John Aguirre, president of the California Association of Winegrape Growers.

Winemakers around the world are already adapting to climate change, including rising temperatures and more frequent, more severe droughts. Those near fire-prone forests face the additional risk that smoke could ruin everything. 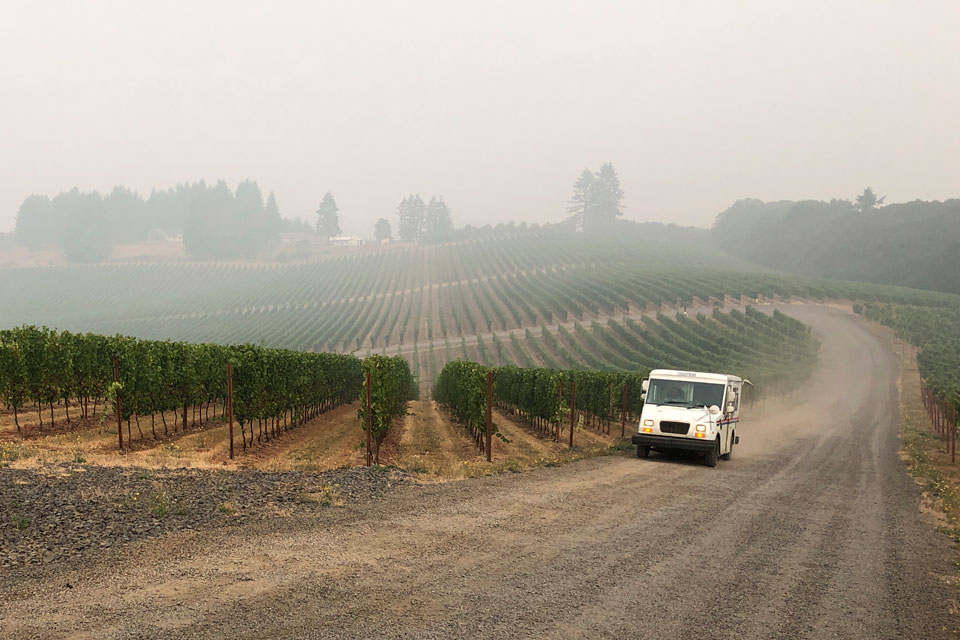 A U.S. postal delivery vehicle drives past at a smoke-shrouded vineyard in Salem, Ore., on Wednesday, Sept. 16, 2020. Smoke from the West Coast wildfires has tainted grapes in some of the nation’s most celebrated wine regions. The resulting ashy flavor could spell disaster for the 2020 vintage. (AP Photo/Andrew Selsky)“Unfortunately, climate experts are telling us this is going to be a problem,” said Anita Oberholster, a wine expert at the University of California, Davis. “And so we need to do better. We need to do loads more research.”

With this year's harvest underway, some wineries are not accepting grapes they had agreed to purchase unless they have been tested for smoke taint, Aguirre said. But laboratories are too backed up to analyze new orders in time.

ETS Laboratories, in the Napa Valley town of St. Helena, California, says test results on grape samples received now will not be ready until November. New clients will have to wait even longer for results, according to the lab's website.

In every grape he has come across, Noah Dorrance, owner of Reeve Wines in Healdsburg, California, told the San Francisco Chronicle, “you could already taste and smell this ashy, barbecued flavor, kind of like a campfire.”

Aguirre recalled sampling smoke-damaged wine during a tasting. One description on a tasting card compared the flavor to “fecal plastic.”

The issue comes down to compounds called volatile phenols, which are released when wood burns and can be absorbed by grapes, Oberholster said.

The compounds are naturally present in grapes. But when their levels get too high, they can impart the foul tastes, "and obviously that’s not a character most people want in their wine,” Oberholster said.

Australian wine researchers were the first to notice the risks. In 2003, they linked smoke in the atmosphere to a taint in wine, said Mark Krstic, managing director of the Australian Wine Research Institute. From then until 2015, Australian producers lost more than $286 million ($400 million Australian) in grapes and wine revenue as a result of smoke.

"Basically the eastern seaboard of Australia was pretty much on fire and extended across many wine regions,” he said in a phone interview. 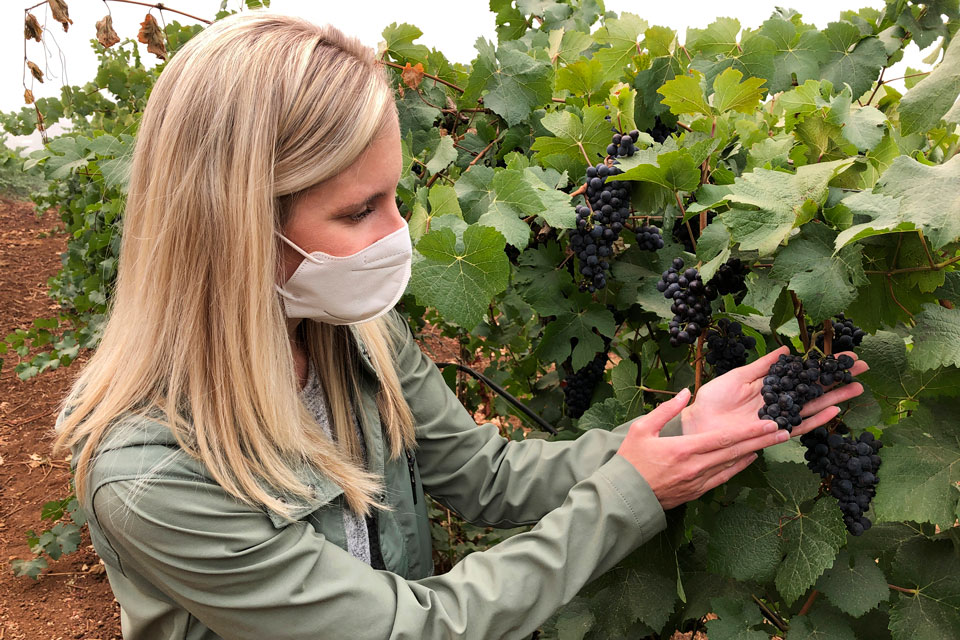 Jim Bernau, founder of Willamette Valley Vineyards, said of the smoke: “I’ve been here growing wine grapes for over 38 years, and I have never experienced or seen anything like this as a wine grower.”

By last weekend, rain and shifting winds had cleared the skies. Bernau believed many Oregon wineries would escape damage because the smoke did not linger too long.

His winery has been fermenting small samples to gauge whether smoke affects the resulting wine. In the samples for white and rosé wines, yeast is introduced into juice that was hand-squeezed from the grapes, with the skins immediately removed.

“After just about two days, you can have a pretty good idea if that juice that now became wine is viable,” Clair said.

The results indicated a low risk of smoke taint for the whites and rosés.

In fermenting red samples, the skin is left on. Initial results are also promising, but the winery is prepared to turn some of the grapes with heavier smoke exposure into rosé instead of red wine, Clair said.

Aguirre's association and nine other regional and national organizations asked Congress last week for disaster aid, saying that without it many of their members "will confront unprecedented economic uncertainty.”

“We fear these wildfires, and potentially more to come, will result in the greatest economic loss, due to a natural disaster, ever suffered by the industry in our states,” the groups said.

The wine industry had already been hammered this year by the coronavirus and shutdown of restaurants, bars and wine tasting rooms.

But the West Coast's 2020 “wildfire vintage” — as some winemakers are already calling it — might not be so bad.

In 2018, a California company abruptly canceled contracts to buy grapes worth millions of dollars from southern Oregon vineyards, claiming fears they were tainted by wildfire smoke. Four Oregon wineries stepped in, bought the grapes and produced “Oregon Solidarity” wines.

They got good reviews.