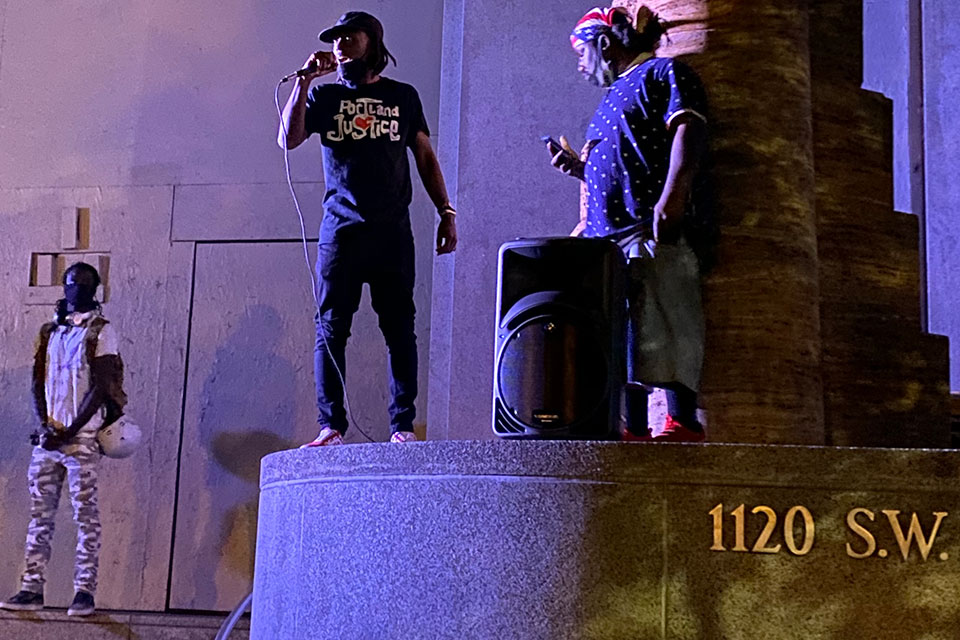 With air quality at hazardous levels last week, Portland activists were forced to pause their more than 100-night run of Black Lives Matter demonstrations as wildfires threatened much of the state.

Organizers found ways to keep up the momentum despite the interruption -- and the added crises.

“With the air quality and visibility, everybody had to take a step back and actually figure out some creative ways and faithful ways to pay some type of respect to the fires and everything that was causing, with people losing to their normalcy, their households,” organizer Seneca Cayson told The Skanner.

Cayson has been a staple of the demonstrations, often seen with bullhorn in hand wearing a t-shirt of his own design reading “Portland (Loves) Justice” in a font that brings to mind movie posters for 1993’s ‘Poetic Justice.’ In late July, he helped push Black Lives Matter demonstrations into the suburbs, gathering with about 30 others to protest Nike’s corporate culture and approach to equity at the corporation’s Beaverton headquarters.

“The setback is, these crises are not making it easier for our communities to be resilient.” Cameron Whitten, founder of the nonprofit Brown Hope, told The Skanner.

“Some of our volunteers focused on folks in evacuation, and some of our volunteers stayed home because of air quality,” Whitten said. “So much of our work has been helping folks in crisis, and we’re serving Black Portlanders, and many of the areas that were affected by evacuation are not the highest concentration of Black people. I think the challenge for us is that we are helping folks in crisis, where their crisis level was not the same as (that of the) people evacuating.”

Cayson told The Skanner that he initially saw the fires as an unfortunate opportunity to take a break from organizing demonstrations, but he quickly realized he too had a connection to the fires, with his 23-year-old son currently incarcerated at Oregon State Penitentiary, which received hundreds of additional inmates evacuated from prisons due to hazardous smokey conditions. The overcrowding has led to increased concerns about safety and COVID-19 transmission, and Cayson’s son later confirmed reports that resources -- including meals -- were more scarce.

Cayson hasn’t seen his eldest son in nearly a year, and said his son’s appeals process has been put on hold indefinitely due to the pandemic. He had also been unable to be in any kind of contact with him for months.

So last week Cayson and his youngest son drove to the prison in Salem.

“I was worried about the actual fires, the condition of the prisoners,” Cayson told The Skanner. “It was 9 o’clock at night, and me and my youngest son went and I rolled down the window, turned my megaphone all the way up and just started yelling. I made myself known very fast there, I think I caught them off-guard. I didn’t push it, I just wanted to be heard. I turned it up just as loud as I could, trying to send a message to the prisoners. I tried my hardest. I thought, somebody’s got to hear me.

"I sent a message to my son, hoping he could get it.”

Cayson was able to speak with his son by phone a week later. 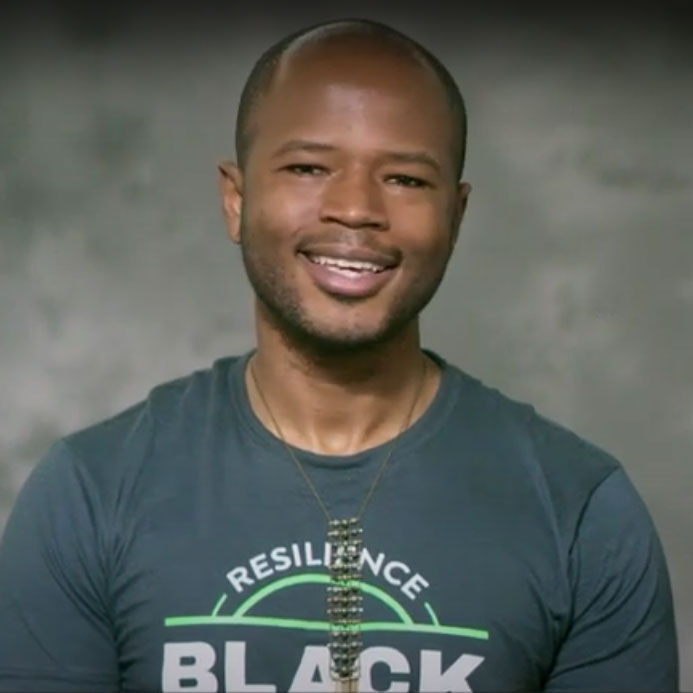 Activist Cameron Whitten says he has positioned his nonprofit, Brown Hope, to be a continuation of Black Lives Matter protests. While Whitten has not been involved in organizing Black Lives Matter demonstrations, he said he has positioned his nonprofit, which he describes as “a nonprofit incubator” to inspire transformational change, to be a continuation of the movement.

“There’s a lot of frustration from Portlanders who really appreciate the protests, but folks have questions about what’s going to come from it,” Whitten told The Skanner. “What we have taken seriously at Brown Hope is how we’re shifting from protesting to power -- really capturing the momentum of this moment to pivot toward lasting change and power for our communities.”

The newly launched Black Resilience Fund is a program of Brown Hope that provides direct financial assistance to Black Portland residents. As of press time, the program had received $1.7 million in contributions, with the largest single donation coming from Comcast in the amount of $50,000.

The BRF has attracted 16,000 donors, with an average per-donor contribution of $100. It has received more than 10,000 requests for assistance, and has had to temporarily freeze applications.

“We wanted to avoid Black folks being interrogated within an inch of their dignity” just to get assistance, Whitten told The Skanner. “We do not need to question whether a Black person coming to us is in need of financial support. Even Black folks who have a living wage and an income, that does not mean they have the savings to weather any crisis.

"We push back against the idea we must means-test Black people.

"We know with any crisis that hits a community, Black folks bear the disproportionate brunt of those negative impacts.”

The BRF was entirely volunteer-run from June until August, and hired three of a projected seven staff members this month. Meanwhile, Brown Hope is currently seeking board members and plans to re-launch two of its key programs, the Reparations Power Hour and the Black Street Bakery, in October.

“We have started a number of contracts with both the city of Portland, and Oregon Health Authority, to ensure that Black Oregonians are getting the resources they need to weather this pandemic,” Whitten told The Skanner.