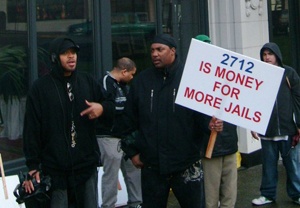 Dozens of music fans gathered in Tacoma, Thursday, to protest the cancellation of a concert by hip-hop group E40 after pressure from police, and the new gang enforcement bill passed by the Washington State legislature and awaiting the governor's signature. Read the full text of the Senate version of the bill (HB2712, SB6608) online. Tell Gov. Gregoire what you think by calling 360-902-4111 or by email at www.governor.wa.gov.  The Coalition of Citizens for Justice will hold a news conference in opposition to the bill 4 p.m. Friday, March 21 at Garfield Community Center in Seattle.