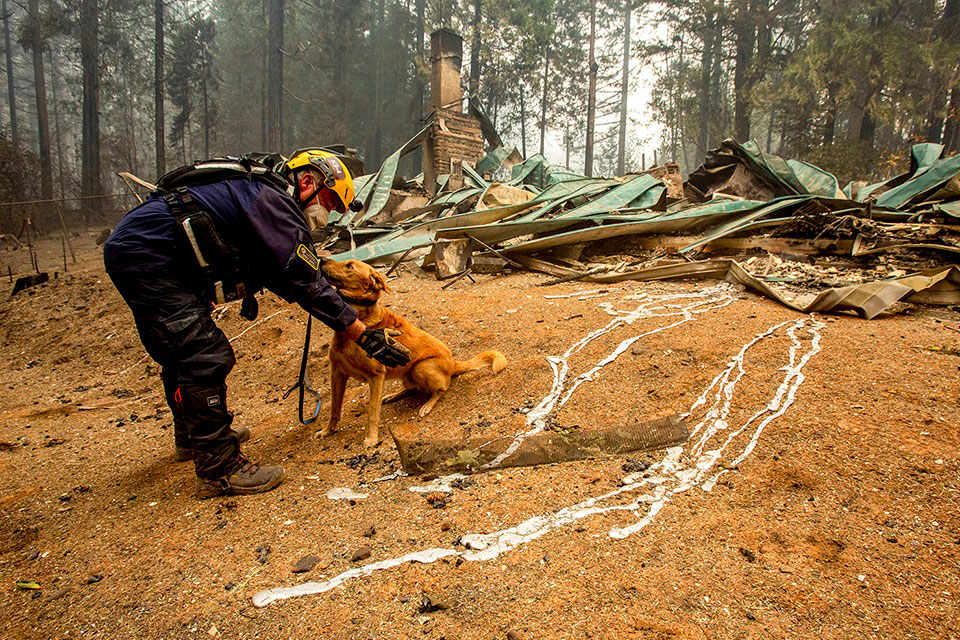 The Latest on wildfires in the U.S. West (all times local) updated throughout the day today, Wednesday, Sept. 16, 2020:

Firefighters continue to work from the North Fork Reservoir near the community of Estacada to the Dickie Prairie area along the southwest edge of the fire, a stretch of more than 28 miles. This work includes continued efforts in the Goat Mountain area to build line in rugged terrain as well as beginning the process of ‘cold-trailing’ areas where fireline has been in place for several days. Cold trailing is when firefighters take off their gloves and use their bare hand to feel for heat. If they feel heat, firefighters will continue to break up the heat source until it’s out and cold to the touch. If needed, they may also trench, or dig a small ditch below the fire on a hillside to catch any rolling debris that may hold heat.

“We currently have over 500 personnel assigned to the Riverside Fire including handcrews, engines, and bulldozers,” said Deputy Incident Commander, Dave Bales. “Their tireless work has helped us reach 3% containment as we continue to focus on protecting local communities.”

Despite forecasted rain in other parts of Oregon, the fire area will continue to remain dry with no measurable precipitation anticipated for several days. 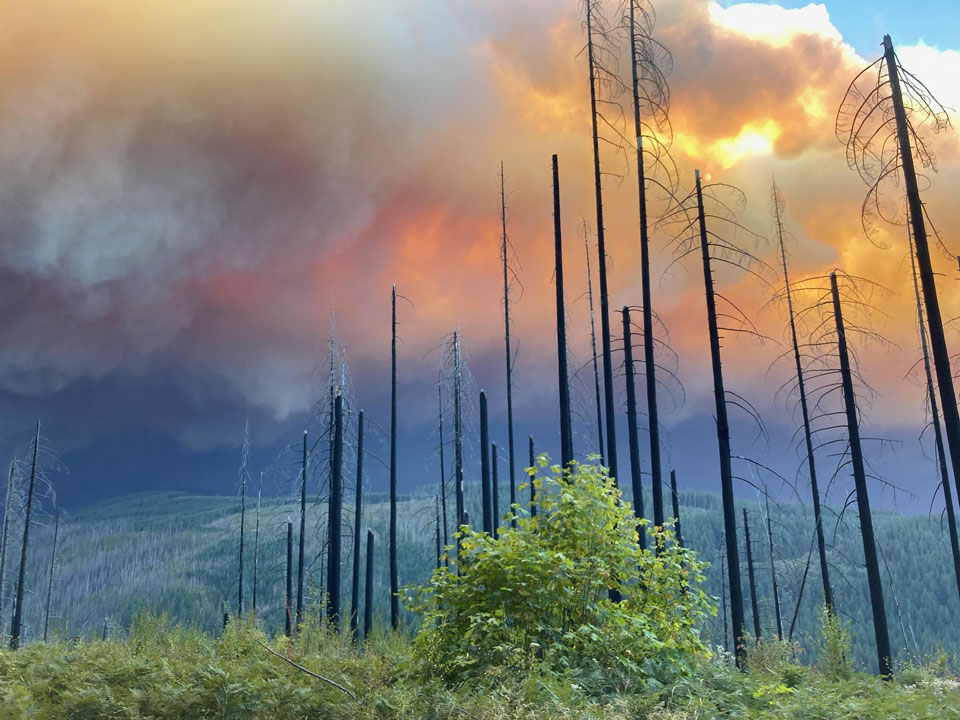 SALEM, Ore. — A fire incident report notes that at least 13 new fires were sparked by downed power lines during a period of high winds between two communities east of Salem, Oregon that were devastated by flames.

The daily report from the Northwest Interagency Fire Coordination Center, written Thursday, says the new fire starts were located between Mehama and Detroit — both in Oregon — during peak winds on Sept. 7.

The report doesn’t say to what extent those fire starts impacted a larger, separate blaze that started on Aug. 16.

That wind-driven fire, called the Beachie Creek Fire, swept through Santiam Canyon on Sept. 8 and wiped out the towns of Detroit, Gates, Mill City and Idanha. Its cause is still under investigation.

The Oregon Public Utility Commission, which regulates investor-owned utilities, told local media Tuesday that it had no information that attributed a “specific wildfire to any specific Oregon utility.” 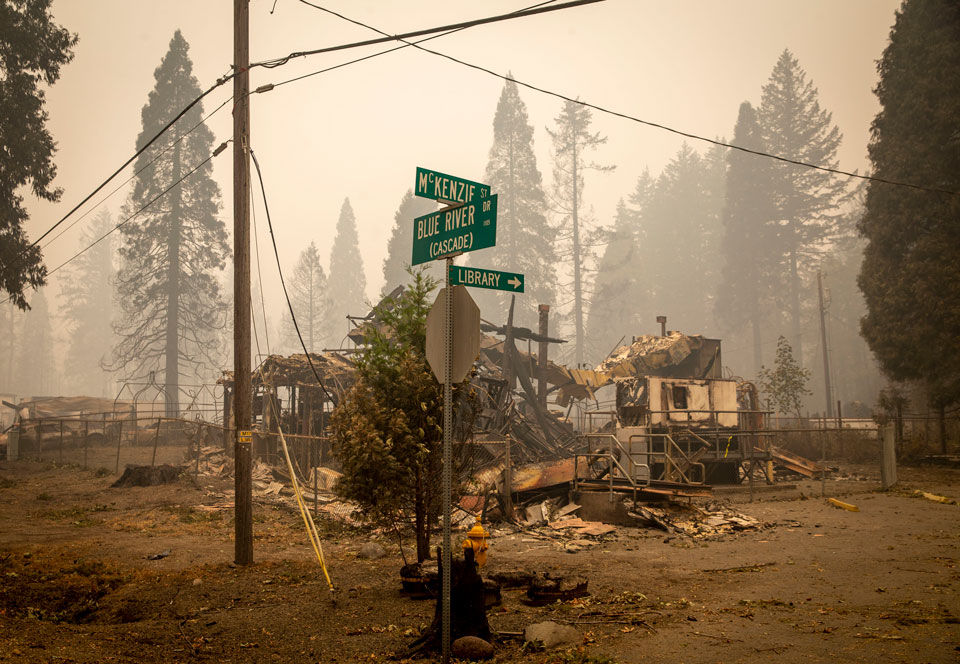 Land and property at an intersection is scorched, Tuesday, Sept. 15, 2020, in Blue River, Ore., eight days after the Holiday Farm Fire swept through the area's business district. More than 300 structures have been destroyed in the fire. (Andy Nelson/The Register-Guard via AP, Pool) 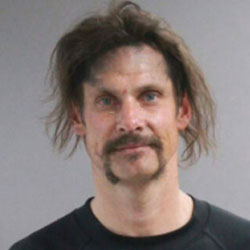 Michael Jarrod Bakkela (photo/Jackson County Sheriff's Office)MEDFORD, Ore. — An Oregon man has been formally charged with setting an arson fire in the southwest part of the state that damaged 15 properties.

According to court documents, 41-year-old Michael Jarrod Bakkela, of Salem, Oregon, started a fire behind a home in Phoenix on Sept. 8 as strong, dry winds pummeled the state.

He is not being charged with starting a much larger fire in Ashland, Oregon which began the same day.

Bakkela is being held on an enhanced bail of $5 million in Jackson County and faces 32 criminal counts, including two counts of first-degree arson, 15 counts of criminal mischief, 14 counts of reckless endangerment and one count of methamphetamine possession.

He was scheduled to be arraigned later Wednesday.

SALEM, Ore. — President Trump has issued an emergency declaration for Oregon due to the deadly wildfires that have burned across the state and federal officials have also declared a public health emergency as dangerous, smoky conditions continue.

The major disaster declaration, issued late Tuesday, allows a range of federal help for people and public infrastructure affected by the blazes. The public health emergency declaration will give hospitals and other organizations in the state more flexibility to meet the needs of people who are on Medicare and Medicaid.

Wildfires raging across the state have burned more than 1,300 square miles (3,360 square kilometers). At least eight people have been killed.

And authorities say more than 1,140 residences have also been destroyed by the blazes and 579 other structures decimated.

SADENA, Calif. — Firefighters have prevented a California wildfire from damaging the Mount Wilson Observatory, which played a pivotal role in early 20th-century astronomy.

The Bobcat Fire came within 500 feet of the observatory on Tuesday but Angeles National Forest officials say firefighters were able to protect the historic site.

The observatory is where astronomers confirmed that galaxies exist outside the Milky Way and that the universe is expanding. The blaze remains a threat to foothill communities but officials say the fire behavior has moderated.