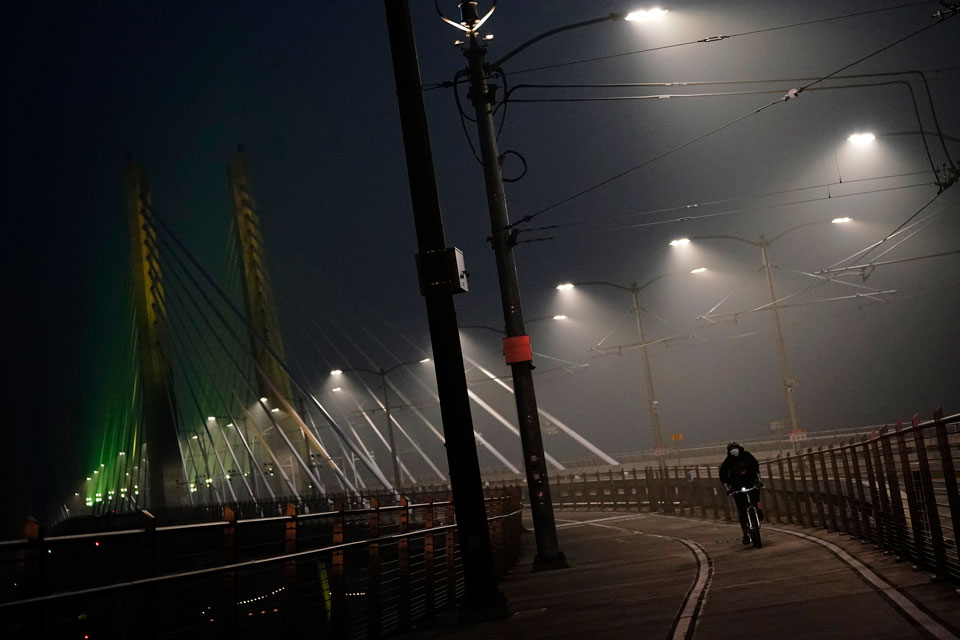 The Latest on wildfires in the U.S. West (all times local) updated throughout the day today, Monday, Sept. 14, 2020:

SALEM, Ore. — Oregon Gov. Kate Brown has requested a Presidential Disaster Declaration for the ongoing wildfires in the state.

Brown made the request Monday, saying it would bring much needed resources to Oregon’s response and recovery efforts.

“Oregon is strong. Oregon is resilient.

"But to fight fires of this scale, we need all the help we can get,” Brown said in a news release.

The request includes additional communications resources, damage assessment teams, search and rescue support, debris management, as well as shelter and medical assistance. Individual assistance for the counties and tribes was also included in the request.

A federal emergency declaration was granted for the state last week.

Washington Governor Jay Inslee speaks during a press conference on Thursday, Sept. 10, 2020, in Malden, Wash., while linemen repair a damaged power pole behind him. Inslee was visiting Malden to meet with first responders and community members after the town was damaged by a wildfire on Monday. (Geoff Crimmins/The Moscow-Pullman Daily News via AP)

George Coble carries a bucket of water to put out a tree still smoldering on his property destroyed by a wildfire Saturday, Sept. 12, 2020, in Mill City, Ore. (AP Photo/John Locher)

Oregon Governor Kate Brown toured the Oregon State Fairgrounds in Salem, Ore., Saturday afternoon, Sept. 12, 2020, where she spoke with volunteers and evacuees. Brown also toured the animal facility where evacuated animals are being kept. Fires along Oregon's Cascade Range grew Saturday, but at a slower rate than earlier in the week. (Beth Nakamura/The Oregonian via AP, Pool)

Boats are partially obscured by smoke from a wildfire at a marina on Detroit Lake burned by the Beachie Creek Fire, Saturday, Sept. 12, 2020, in Detroit, Ore. (AP Photo/John Locher)

Shayanne Summers holds her dog Toph while wrapped in a blanket after several days of staying in a tent at an evacuation center at the Milwaukie-Portland Elks Lodge, Sunday, Sept. 13, 2020, in Oak Grove, Ore. "It's nice enough here you could almost think of this as camping and forget everything else, almost," said Summers about staying at the center after evacuating from near Molalla, Oregon which was threatened by the Riverside Fire. (AP Photo/John Locher)

Kristopher Smith holds his dog Tripp outside his tent at an evacuation center at the Milwaukie-Portland Elks Lodge, Sunday, Sept. 13, 2020, in Oak Grove, Ore. Smith evacuated from Molalla, Oregon which was threatened by the Riverside Fire. (AP Photo/John Locher)

Beth Deleo holds her dog as Ben Quaempts loads donated items into their van at the Milwaukie-Portland Elks Lodge, Sunday, Sept. 13, 2020, in Oak Grove, Ore. The two have been living in their van for the past several days after evacuating from Molalla, Oregon, which was threatened by the Riverside Fire. (AP Photo/John Locher)

A view of downtown Portland from the East Bank Esplanade is seen on Monday, Sept. 14, 2020. The entire Portland metropolitan region remains under a thick blanket of smog from wildfires that are burning around the state and residents are being advised to remain indoors due to hazardous air quality. (AP Photo/Gillian Flaccus)

A fire warning sign is seen through the smoke in Sandy, Ore., on Monday, Sept. 14, 2020. Gov. Kate Brown said Monday she has asked President Donald Trump to issue a major disaster declaration for Oregon as it battles deadly wildfires that have wrought destruction across the state. (AP Photo/Rachel La Corte)

SEATTLE — Alaska Airlines, along with its regional carrier Horizon Air, has suspended all flights in and out of Portland, Oregon, and Spokane, Washington, because of wildfire smoke.

The Seattle-based airline said Monday afternoon those flights would be canceled through 3 p.m. Tuesday as the Pacific Northwest continues to battle intense wildfires.

Alaska and Horizon have also canceled flights at smaller airports due to fire and smoke including Eugene, Medford and Redmond/Bend in Oregon, and Pasco and Walla Walla in Washington.

“Across the West, fires are creating thick smoke and haze, causing very poor air quality conditions in the Portland and Spokane areas,” Alaska said in a statement Monday. “We made the difficult decision to stop our operation so that our employees and guests can remain safe.”

SACRAMENTO, Calif. — Thousands of firefighters are on the lines of more than two dozen major California wildfires that have scorched 5,000 square miles (12,950 square kilometers).

The known death toll Monday stands at 24 and more than 4,200 structures have been destroyed.

The California Department of Forestry and Fire Protection says Red Flag warnings have returned to the northeastern portion of the state due to a combination of gusty winds and low humidity that could continue through much of the week.

Elevated fire weather conditions are expected in the central and southern areas of the state due to warm and dry conditions.

Smoke remains a problem throughout many of California’s valleys.

SALEM, Ore. — Authorities in Oregon say more than 20 people remain missing from the wildfires burning across the state.

Gov. Kate Brown said Monday that 10 people are confirmed dead and that the number would likely rise as more confirmations come in from local law enforcement and medical authorities.

Andrew Phelps, director of Oregon’s office of Emergency Management, said at a news conference that 22 people are still listed as missing. He said work is continuing to locate people and update lists.

Not all people listed as missing are later found dead. Over the weekend the Jackson County Sheriff’s office in southern Oregon said the number of people accounted for from a blaze there was down to one after about 50 people were initially unaccounted for.

SALEM, Ore. — Gov. Kate Brown said Monday she has asked President Donald Trump to issue a major disaster declaration for Oregon as it battles deadly wildfires that have wrought destruction across the state.

Brown said at a news briefing that the state “has been pushed to its limits.”

A major disaster declaration would allow a range of federal help for people and public infrastructure affected by the blazes that have destroyed hundreds of homes and burned about 1,560 square miles (4,040 square kilometers). At least 10 people were killed in the blazes, and authorities say that number will likely increase.

Brown and fire officials said that better weather is aiding firefighting efforts, but warned that wind conditions by mid-week could complicate things for crews on the ground.

The Democratic governor also said the state would distribute 250,000 N-95 masks to people such as agricultural workers, tribal members and others vulnerable to the smoky skies and poor air quality that has plagued the state for days.

And Brown said that three large charitable foundations in the state were establishing a fund to aid in recovery efforts.

ALBANY, Ore. — An Oregon sheriff says authorities are searching for a person suspected of setting eight suspicious fires around the communities of Sweet Home and Brownsville early Monday morning.

The area is about 60 miles (96 kilometers) southwest of a large fire that wiped out numerous communities in Oregon’s Santiam Valley and forced thousands to evacuate.

Linn County Sheriff Jim Yon says deputies are searching for a 1990s Nissan pickup truck that’s either white or silver with a black canopy. The truck was seen in the area of one of the fires.

PORTLAND, Ore. — Authorities say a homeless man with mental health issues was arrested early Monday on suspicion of starting seven small brush fires in Portland, Oregon, in the past 24 hours.

Firefighters extinguished three and community members put out three others.

No one was injured and no structures were damaged. Police say Lopez was taken to a hospital for a mental health evaluation.

The FBI and state and local authorities say there is not truth to rumors circulating online that anti-fascist activists started fires in Oregon.

The U.S. Forest Service reports as another day of challenging firefighting begins, crews are confronting 34 large wildfires burning 1,666,534 acres across Oregon & Washington with:

The Riverside Fire in Clackamas County is continuing to receive resources from the totals above, and now has 385 personnel assigned including hotshots, engines, dozers and more.