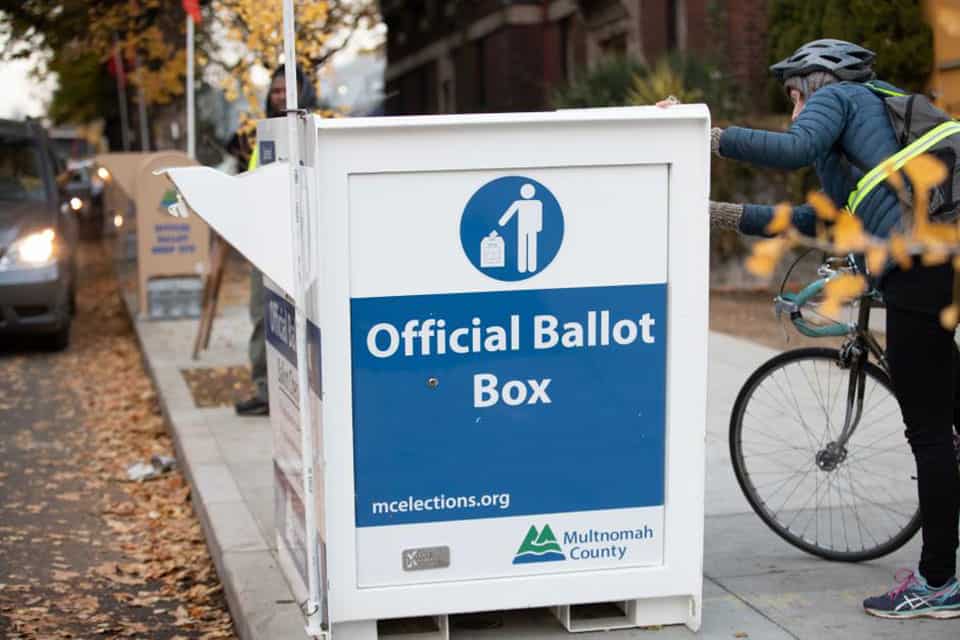 This article includes an update below added since originally published.

A measure on ballots in November would make Oregon the first state to decriminalize low-level drug possession, but friction between some community organizations and the nonprofit driving the campaign has led to a shrinking list of endorsements. 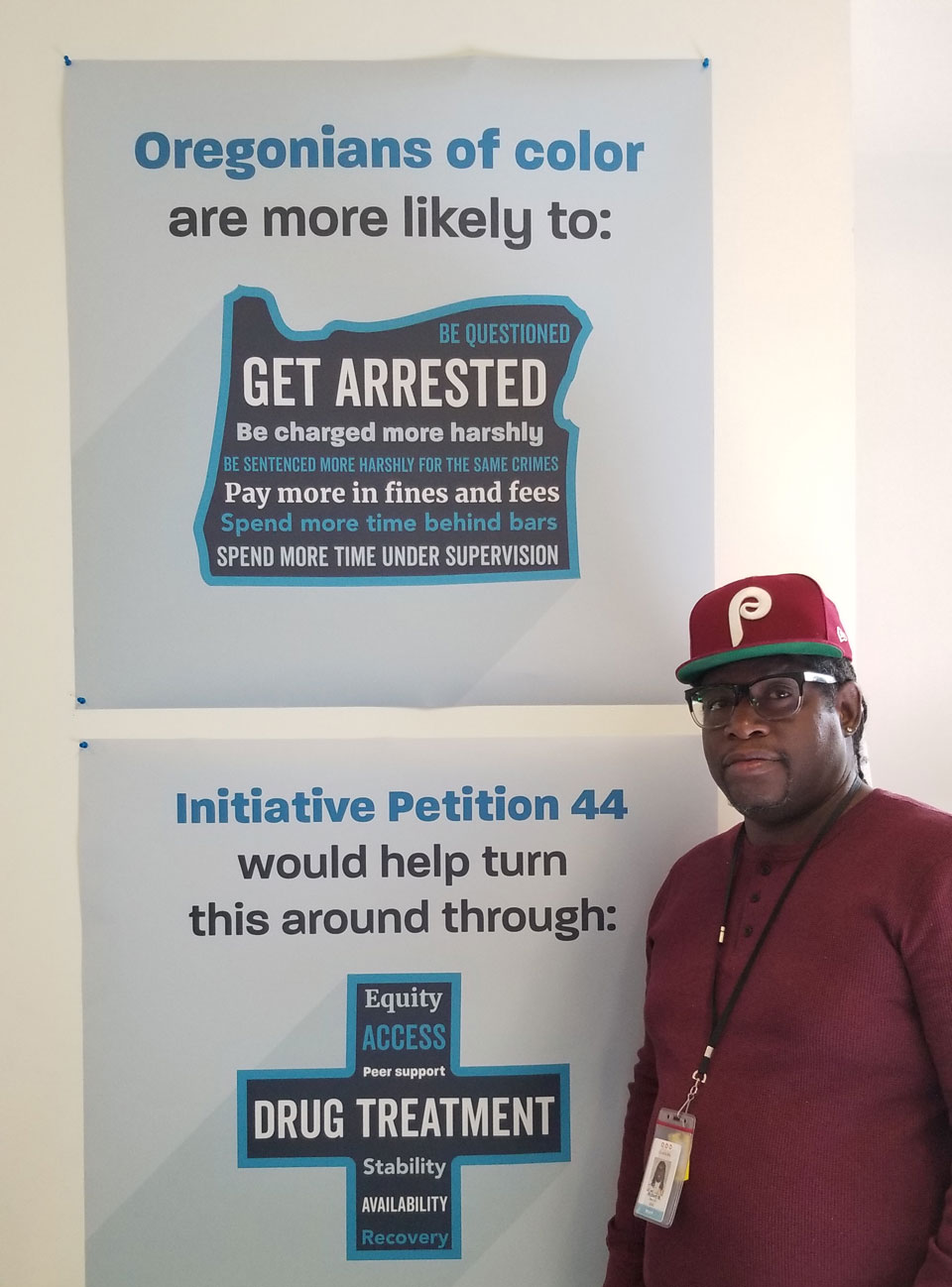 Hubert Mathews is a worker on the Yes on Measure 110 campaign and a peer mentor at Central City Concern, doing outreach to people on the street in situations similar to his past experience.The Drug Addiction Treatment & Recovery Act (DATRA) pushes for "a humane, cost-effective, health approach" in a state that ranks near the bottom in providing access to addiction treatment services. Measure 110 would downgrade possession of small amounts of heroin, cocaine, and methamphetamine to a non-felony Class E violation, with a maximum fine of $100. Violators would have the option of getting a health assessment for treatment in lieu of the fine.

The DATRA would also create addiction recovery centers as intake for those seeking addiction treatment.

But a few supporters of Measure 110 have paused their endorsements, and prominent organization Urban League’s executive director Nkenge Harmon Johnson expressed concerns the authors of the measure ignored or undermined current efforts to improve access to care, and that they failed to incorporate the Oregon Alcohol and Drug Policy Commission's strategic five-year plan, the result of a collaboration between 300 stakeholder organizations.

“With Oregon Recovers, and our local officials, we (at the Urban League) have been building a better pathway” to addiction services, Harmon Johnson wrote in an Aug. 4 email to the Drug Policy Alliance, a New York-based nonprofit that has spent more than $2.4 million financing the campaign. “DPA should not devalue that process."

“I now wonder whose advice you're taking, and what engagement means to this DPA,” Harmon Johnson also said in the email. “It does not seem to resemble the careful, and deliberate relationship that the Urban League and Oregon Recovers have built.”

But Yes on Measure 110 campaign manager Peter Zuckerman emphasized that more than 100 organizations had endorsed the measure, including more than 30 BIPOC groups.

“I’ve worked on nine campaigns in Oregon. I’ve never had a campaign that didn’t have some endorsements pulled, especially when there are so many endorsers,” Zuckerman told The Skanner.

“A few have put their support on hold while they try to get more information.”

Current supporters of Measure 110 include Unite Oregon, the Coalition of Communities of Color, NAACP Portland, the Confederated Tribes of Grande Ronde, the Asian Pacific American Network of Oregon, Causa, the Latino Network, the Community Alliance of Tenants, and the Native American Youth and Family Center, as well as the ACLU, Planned Parenthood, and the National Association of Social Workers.

“The ADPC is largely law enforcement,” Zuckerman told The Skanner. “We are not going to meet with the opponents of the campaign who want to keep the current system in place, (as we work) to shift to a health-based approach. This (measure) means not punishing people for a health issue. Some people philosophically disagree with that, and we’re not going to meet with those people.”

The DPA has sponsored harm reduction and cannabis legalization campaigns in several states, including Oregon's push to legalize medical marijuana use.

Supporters of Measure 110 welcome the treatment-over-criminalization approach, citing the far-reaching consequences that drug convictions can have on housing, employment and education for the individual. Many also point out the disproportionate effect current drug policy has on communities of color: A 2018 report issued by the Oregon Criminal Justice Commission found that out of all racial groups, Black Oregonians were arrested on charges of drug possession at the highest rate, nearly three and a half times that of White Oregonians -- even though studies show drug use is on average higher among Whites.

While removing the criminalization element has proven to be a selling point for Measure 110 supporters, some in the criminal justice system criticized the option of a relatively inexpensive fine that would allow individuals to avoid legal ramifications, which they said would remove one of the most compelling factors in seeking treatment.

"Sadly, many people only confront their substance use disorder because of a contact with law enforcement which often ends in diversion treatment,” the Oregon District Attorneys Association said in a statement opposing Measure 110, which it also criticized for taking law enforcement out of the equation as “an important partner in combating what is both a public safety and a public health problem.”

But Bobby Byrd, a campaign organizer for Yes on Measure 110, disagreed. He said his own drug conviction from nearly three decades ago continues to present barriers to employment and housing, and that an interaction with the legal system did nothing to present him with treatment resources.

“They were no help to me at all,” Byrd told The Skanner. “There was nothing put on the table. They railroaded me, where I did not understand the court lingo, the verbiage that they used.

"The only thing I could understand was the probation time.”

He got clean outside of the court system, and said the conviction continues to derail a lot of his energy and aspirations.

A 2018 report by the Oregon Health Authority cited a number of barriers to effective addiction treatment, including the practice of treating substance abuse disorders as acute rather than chronic conditions. The report also identified the prohibitive pricing of treatment, and inconsistent medical insurance coverage for treatment, as obstacles to care -- even though 94% of Oregon residents carried some form of medical insurance at the time of the report, and despite Oregon’s 2005 mandate requiring health insurance carriers in the group market to cover substance abuse treatment. Additionally, the report demonstrated the shortfall of treatment providers throughout the state; for example, 27 of Oregon's 36 counties lacked opioid treatment programs.

Measure 110 would establish a council to approve grants for year-round, all-hours addiction recovery centers statewide that would provide assessment and triage for those seeking addiction treatment services. Centers would be operated by existing organizations and agencies.

But some critics were alarmed by what they saw as a lack of inclusion. In a July 28 email to Christopher Soda of the DPA, Mike Marshall of Oregon Recovers expressed concerns that the measure "fails to require an equity lens be applied to funding decisions and limits the decision- making role of people in recovery.”

“Decriminalization is not restorative justice,” Marshall wrote in a list of concerns he shared shortly before a Zoom meeting with DPA representatives, Se-ah-dom Edmo of the MRG Foundation, and Mercedes Elizalde of Central City Concern.

Marshall also wrote that the campaign "promises better, increased 'treatment' but...does not require funding treatment, nor does it facilitate the funds for treatment. This will lead to a false sense of progress amongst policymakers."

Each quarter, the measure would funnel any recreational marijuana tax revenue above $11.25 million to what would be called the Drug Treatment and Recovery Services Fund. That means the state school fund, funding for mental health programs, and funding for the Oregon State Police would be significantly reduced.

Marshall also expressed concerns that this mistaken perception “undermines the 2021 alcohol pricing campaign needed to fund implementation of the ADPC strategic plan." Late last month, Marshall appeared before the ADPC to push for a rare tax hike on alcohol, which the Oregon Health Authority implemented in its 2021 budget proposal.

Our recent article “Initially Supportive, Some Community Leaders Criticize Move to Decriminalize Drugs” received some criticism from readers. While I stand by the facts cited in the article, I agree that one phrase, “friction between some community organizations and the nonprofit driving the campaign has led to a shrinking list of endorsements,” was poorly chosen. In sum, Measure 110 counts a robust list of more than 100 organizations, including at least 30 BIPOC organizations, among its endorsers.

Both the Urban League and The Miracles Club, an organization focused on the African American recovery community, have paused their endorsements of Measure 110. A number of other stakeholders have voiced concerns about the structure of the measure and how it would impact funding to current programs, which we felt merited a closer look.

We regret that this article was not better contextualized. Among the criticism we have received is that the article attempted to drive a “racial wedge” into the measure by quoting White critics, like Mike Marshall of Oregon Recovers. But the Urban League’s Nkenge Harmon Johnson shared many of these concerns and also expressed reservations about the Drug Policy Alliance’s motivations, and it was an oversight not to more extensively quote Harmon Johnson in the article.

In an Aug. 4 email to DPA representatives and stakeholders, Harmon Johnson questioned the alliance’s approach to structuring the measure: "I was surprised that DPA will not consider any community investments in support of Oregon's efforts to end our addiction crisis in lieu of large payments to the good ol' boys and Girls of Oregon political consultants," she wrote, and later said "it's puzzling that a national social justice organization that claims to want to work with us would be opposed to actual policy development through investing in, and centering communities of color.”

Harmon also criticized the campaign’s budget for allocating “considerable sums to companies with no BIPOC employees.“

The sentiment shared by the organizations that paused their endorsements, as well as the co-authors of the emails to the DPA cited in the article, was that the DPA did not properly integrate local organizations and initiatives already working to improve access to addiction services in Oregon.

Julia Mines, executive director of The Miracles Club, told The Skanner she had paused her endorsement because she was concerned about how funding would be distributed to existing agencies.

“I’m trying to understand how this measure is actually going to impact the Afircna American recovery community by pulling the police out of the picture,” Mines told The Skanner. “For me, it took me to get to prison. Not that it’s fair the way (the law) is written and what (law endorsement) does, don’t get me wrong. Decriminalizing is fine, but some of us when we’re addicts and in that addiction, we still need that intervention.”

Mines said her organization is in its 26th year of operation and pre-pandemic, saw at least 400 people a week access services. The Miracles Club currently depends on funding from the county for its limited budget, and Mines said it was unclear how Measure 110 would distribute its funding, and to whom.

It should be noted that these organizations have paused, not pulled, their Measure 110 endorsements. Both support the aims of the measure, but expressed concerns about the logistics and potential harm to local organizations.

The article was not meant as an argument against Measure 110, and we have previously run an op-ed in favor of it Measure 110 Helps Dismantle Systemic Racism. We were trying to give people the information they need around the issue to make informed decisions, and felt that concerns from local Black leaders, and leaders in the recovery community, called for further exploration. We regret that some readers misunderstood our intent.