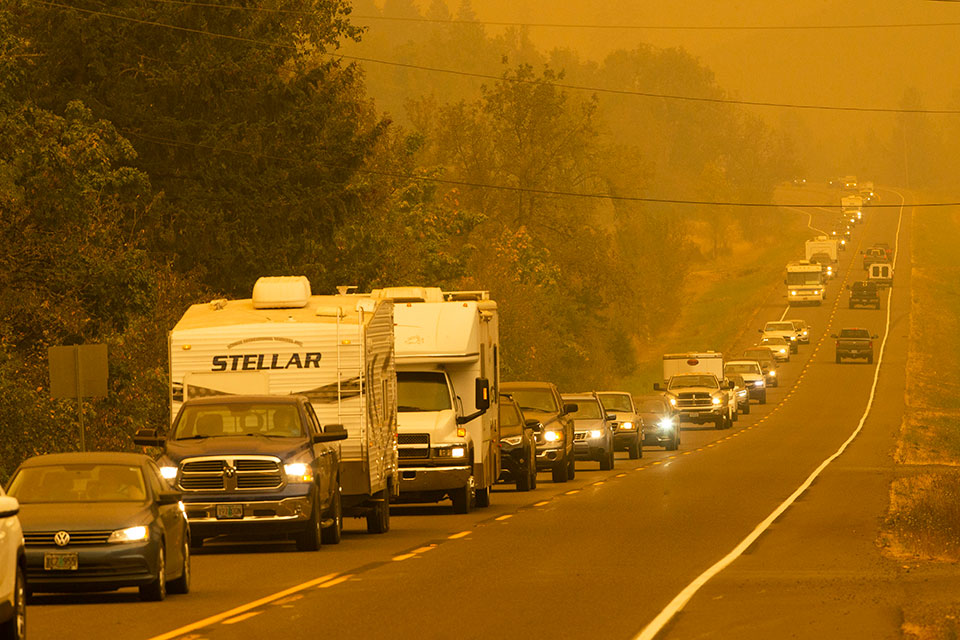 Officials said the number of simultaneous fires and perhaps the damage caused was unprecedented. Several deaths were reported, including a 1-year-old boy in Washington state. Oregon Gov. Kate Brown said communities have been “substantially destroyed” and warned there could be numerous fatalities.

Because of its cool, wet climate, the Pacific Northwest rarely experiences such intense fire activity. But climate change driven by human-caused greenhouse gases is expected to keep warming the region, with most models predicting drier summers, according to the College of the Environment at the University of Washington. 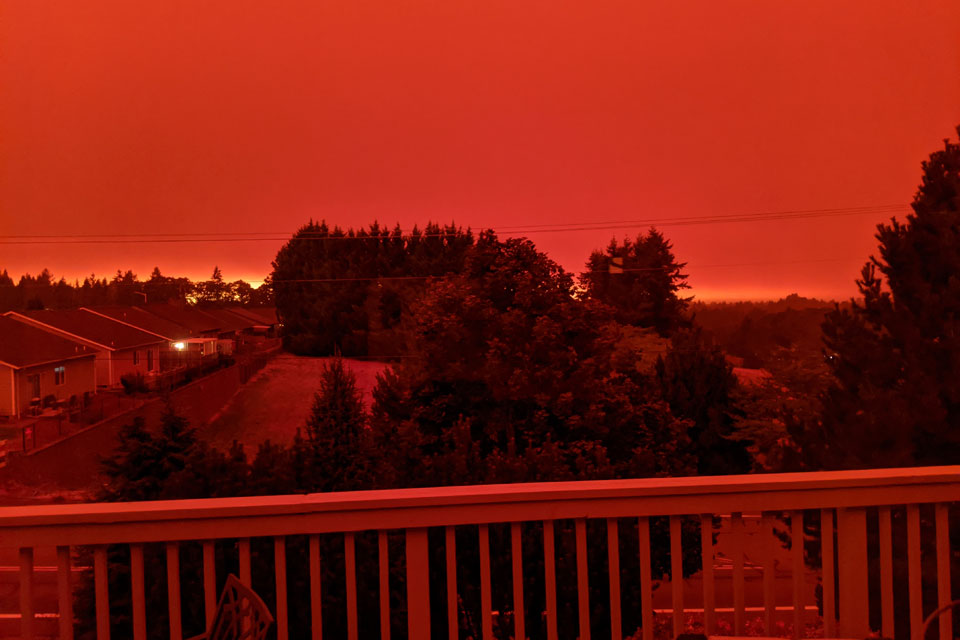 This photo taken from the home of Russ Casler in Salem, Ore., shows the smoke-darkened sky well before sunset at around 5 p.m., Tuesday, Sept. 8, 2020. Strong winds and high temperatures continued to fuel catastrophic fires in many parts of Oregon on Wednesday, forcing thousands of people to flee from their homes and making for poor air quality throughout the West. Huge wildfires also continued to grow in neighboring Washington state. (Russ Casler via AP)Brown said Oregon could see the greatest loss of life and property from wildfires in state history. The small towns of Phoenix and Talent in southern Oregon were heavily damaged. Another fire leveled most of the small farming town of Malden in eastern Washington — burning down the fire station, post office, City Hall and library.

In Washington state, a fire burned more than 750 square miles (1,900 square kilometers) of forest, brush and shrubland, Washington Gov. Jay Inslee said Wednesday after a 30-minute tour of the fire area in Sumner, east of Tacoma.

Inslee said low humidity, high temperatures and winds combined to likely make the blaze one of "the most catastrophic fires we’ve had in the history of the state.” 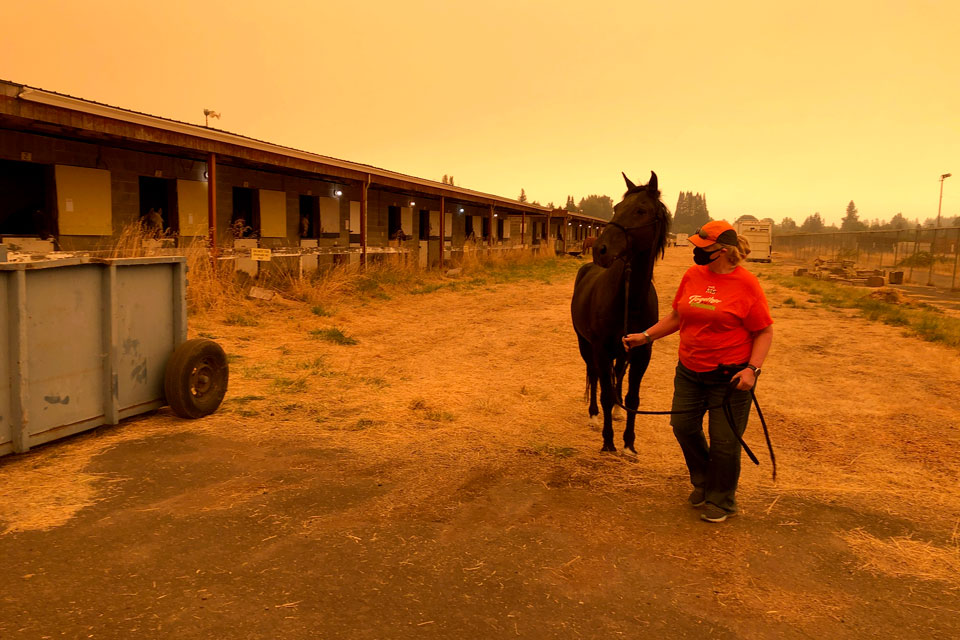 Catherine Shields, of Silverton, Ore., leads her horse Takoda under smoky skies, on the Oregon State Fairgrounds, Wednesday, Sept. 9, 2020, in Salem, Ore. Shields evacuated the horse and other animals from her home on Tuesday, as a wildfire threatened. Hundreds of horses have been brought to the fairgrounds in Salem by people fleeing the fires, along with llamas, goats and other animals. The Red Cross is helping people at the fairgrounds, which has been turned into an evacuation center. (AP Photo/Andrew Selsky)

Fires were also causing chaos in California, where thousands of homes where threatened Thursday after winds whipped a blaze into a monster that incinerated houses in a small mountain community and killed at least three people.

Several other people have been critically burned and hundreds, if not thousands, of homes and other buildings are believed to have been damaged or destroyed by the fire northeast of San Francisco, authorities said. Experts say the California's fires are growing bigger and moving faster than they ever have before. 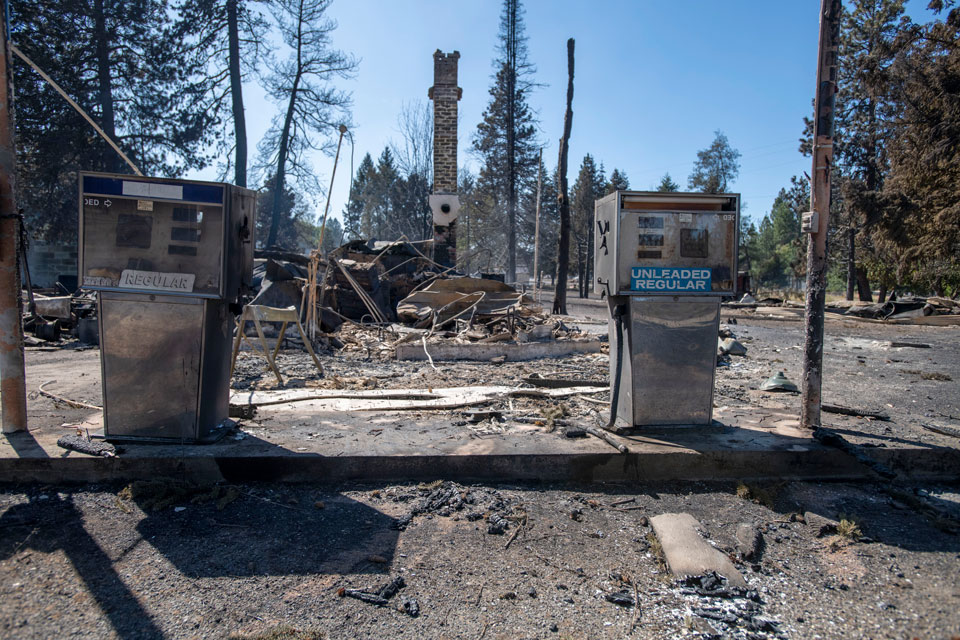 A service station that was destroyed by a wildfire is shown Tuesday, Sept. 8, 2020, in Malden, Wash. High winds kicked up wildfires across the Pacific Northwest on Monday and Tuesday, burning hundreds of thousands of acres and mostly destroying the small town of Malden in eastern Washington state. (AP Photo/Jed Conklin)In Oregon, fires erupted along Interstate 5, hitting towns and forcing a shutdown of the main freeway along the West Coast. U.S. Highway 101, the main coastal highway running through California, Oregon and Washington, was also impacted.

At least three people in Oregon and the small child in Washington state were reported killed. In Oregon, authorities said one of the victims from Marion County near Salem was a young boy, whose remains were found alongside those of his dog.

The extent of damage was unclear because so many of the fire zones were too dangerous to survey, said Oregon Deputy State Fire Marshal Mariana Ruiz-Temple.

A mandatory evacuation was ordered in the northern half of Lincoln City, a vacation town of about 10,000 people on the Oregon coast.

“The fire is in the city,” said county Emergency Management spokesman Casey Miller.

Some buildings had been burned, Miller said, but he had no immediate details. Traffic snarled as people tried to drive south. An evacuation center was set up at a community college in Newport.

In Talent, a mobile home park with more than 50 homes was turned into an empty lot except for one lone trailer, said Drew Cutler, who lives in nearby Ashland.

In western Oregon, fire tore through Santiam Canyon and the Cascade Range foothills east of Salem, the state capital. People with animals sought shelter from the Red Cross at the fairgrounds

Catherine Shields evacuated her home in Silverton with a menagerie of animals, assisted by neighbors and strangers. As smoke obscured the sun and ash fell from the sky, they helped load her and her partner’s three horses, a donkey, two llamas, a dozen sheep, geese, ducks, turkeys and dogs onto trailers and vehicles.

As she walked one of the horses at the fairgrounds Wednesday, she marveled at how people were pulling together despite political divisiveness in the country.

“In the last 24 hours, we just felt people are doing their best," Shields said.

With an expected break in the weather Thursday, Doug Grafe, chief of fire protection at the Oregon Department of Forestry, said firefighters are hoping to turn things around.

“Today marks the last day where we are witnessing this historic weather event,” Grafe said.

In northeastern Washington, a 1-year-old boy died after his family was apparently overrun by flames while trying to flee a wildfire, Okanogan County Sheriff Tony Hawley said.

KOIN reported that police confirmed that a boy and his grandmother died in a wildfire near Lyons, Oregon. The Mail Tribune in Medford, Oregon, reported that Jackson County Sheriff Nathan Sickler confirmed at least one death and a criminal investigation at the origin point of a wildfire that started near Ashland.

Holland said Oregon State Police had warned him to leave earlier in the day, but the fire seemed far away and he decided to stay. Around 10 p.m., he said, his landlord came pounding on the door screaming at him to go.

He left his rental house as flames exploded in cedar trees around him. He found his dog Gus waiting in his truck.

He said his sole remaining possessions — rifles, dentures and some clothing — were also in the truck.

“I’ve been through hell and high water but nothing like this.

"I’ve been shot down and shot at but this — last night, I’m still not over it,” Holland said.