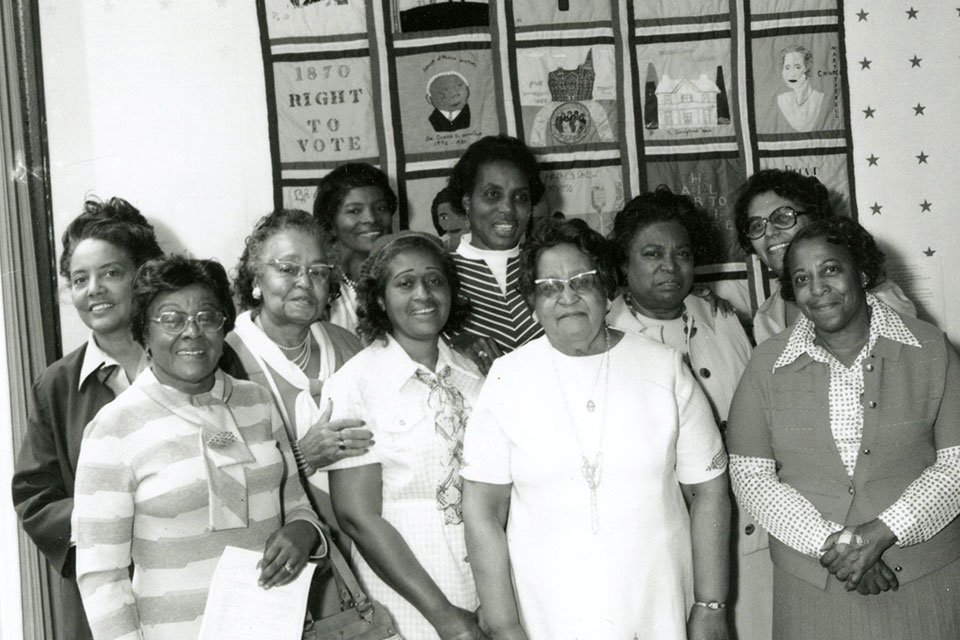 This fall the Oregon Historical Society will display a quilt depicting Black history in America. But the Afro-American Heritage Bicentennial Quilt is just as much the legacy of the 15 Black women of Portland who spent two years creating it.

The 30-square piece documents overlooked Black presence and importance in the nation’s story, from Black Spanish explorer Pedro Alsonso, who piloted the Santa Maria during Columbus's expedition to America, to baseball star Hank Aaron. It will be on display in the OHS lobby this October as part of Portland Textile Month exhibit, now in its third year.

“There’s no anger here -- that’s what I find fascinating,” Sheridan Collins, an advisor at Portland Textile Month, told The Skanner. “And there’s no bitterness.

"It was made with love.”

“All these women came together to make a statement piece, and I think it was really impressive what they did,” Sylvia Gates Carlisle, the only surviving quilter, told The Skanner. 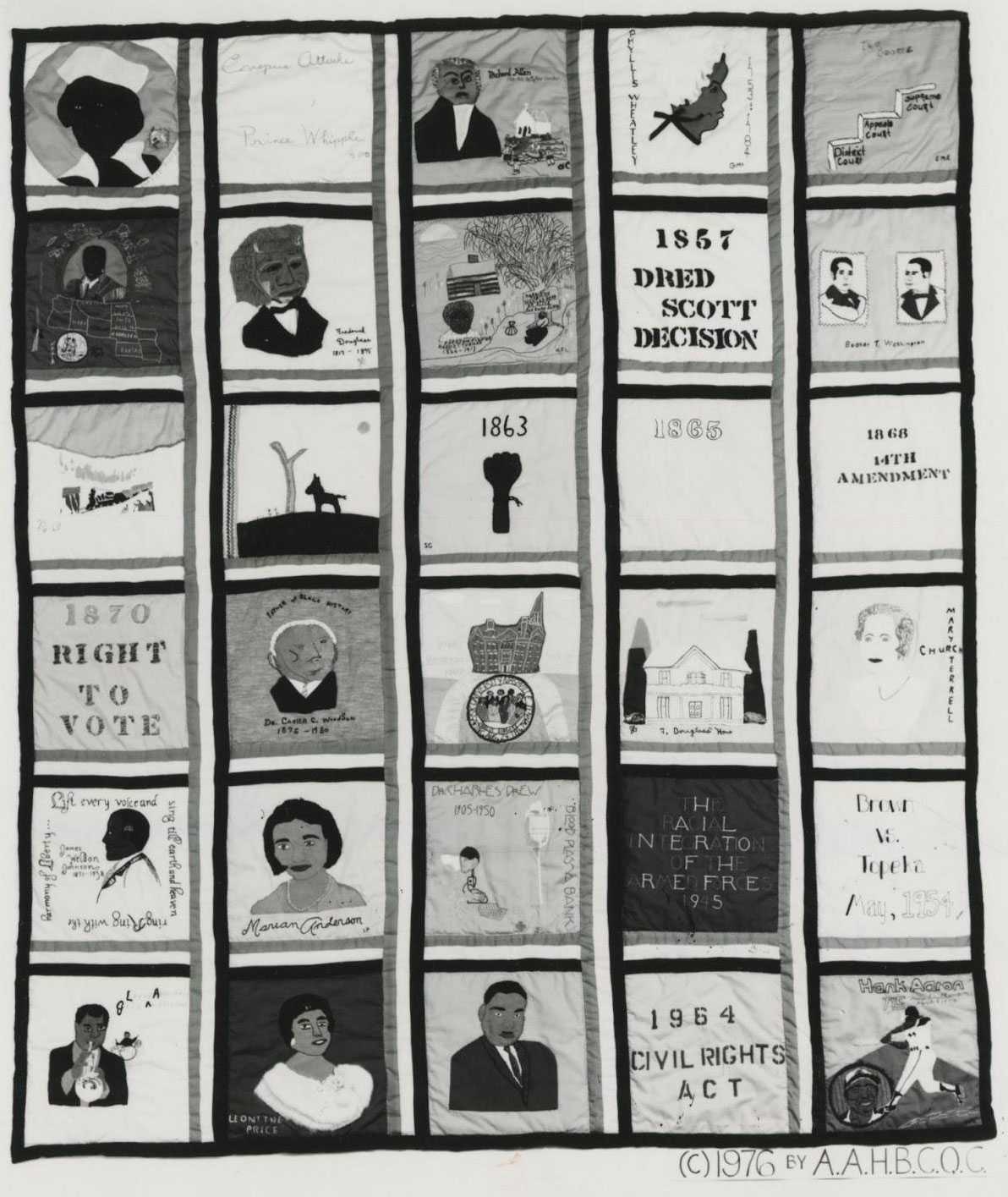 Photo/The Oregon Historical SocietyGates Carlisle was an undergrad when her mother, Jeanette Gates, spearheaded the effort in 1974. Gates Carlisle spent visits home designing and quilting with women she had known most of her life.

“My mother was a person who got things done by grit and determination,” Gates Carlisle told The Skanner. “She quilted with these ladies socially, and I think this was just something she decided to do because the bicentennial was a landmark event. She did not want Black history in general, or black-skinned Portland in particular, to be forgotten.”

‘A Mover and a Shaker’

Gates Carlisle, a physician now based in California, told The Skanner that for her mother’s elevating Black history in popular consciousness didn’t begin and end with the quilt.

“My mother’s big thing was to have Black history well reflected in the school curriculum,” Gates Carlisle told The Skanner. “So (the quilt) is an expansion of something that was really important to her.”

Gates was born into a family of activists in New Orleans. Her father was the Rev. Dr. James Gordon McPherson, a well-known evangelist, and her grandfather had owned land in Louisiana.

According to Gates Carlisle, she also took on then-Superintendent of Portland Public Schools Robert Blanchard “as a vocation.” Blanchard was the architect of the Blanchard Plan to bus Black students to White schools, then close traditionally Black schools grade by grade, ending with Jefferson High School. He was ultimately fired in 1980.

During his tenure, Blanchard was unsupportive of Gates’ desire for a more inclusive history curriculum. Gates insisted that her daughter, at least, be allowed to study Black history as part of her school requirements, and Gates Carlisle recalls skipping ‘Huck Finn’ in favor of reading Frederick Douglass, and gave presentations to Blanchard and the school board every year.

In 1970, Gates won a class action lawsuit against Georgia Pacific, alleging discriminatory hiring practices after she was passed over for an accounting position in favor of a much less educated and experienced White man.

“At that time, it was the largest class-action lawsuit in Oregon history,” Gates Carlisle told The Skanner. “And so what she did with her settlement was every year she would bring John Hope Franklin and Helen G. Edmonds -- these two famous, nationally renowned historians -- to teach Black history to Portland school teachers. That’s what she spent her settlement on.”

Gates Carlisle added, “In a lot of ways Black history has faded into the ether. There’s Crispus Attucks and the Civil War, and then the March on Washington, and then that’s it until we get to Barack. But Black history is a lot more substantial in America, and in Portland.”

In 1976, the quilting committee gave the quilt to the OHS -- but not before it was displayed at Harvard, the State Department and the Smithsonian Institute.

“Textiles have had a component of social importance in all cultures for a long time,” Collins told The Skanner.

“The fact that this quilt was made for a purpose to speak on issues like Black history and American patriotism is not unusual.”

During a gifting ceremony at OHS on July 1, 1976, Gates described the quilt as “vibrating with history -- pulsating the vitality of liberation and democracy.”

“Here is our Afro-American Heritage; of this, we are proud,” Gates said. “May the 'Spirit of '76' extend and project for many, many years."

A program of the day’s events noted that after completing the quilt, two of the quilt committee members had met someone they honored with a quilt block: Hank Aaron, and soprano Leontyne Price.

The program also noted the quilters’ considerable civic and professional credentials, which Collins and OHS have worked to compile:

Kathryn Hall Bogle, first Black journalist to be paid by The Oregonian, for her article “An American Negro Speaks of Color” in 1937. Unable to secure full-time employment at White-run newspapers, she wrote for The Skanner, the Observer, Seattle’s NW Enterprise, and the Pittsburgh Courier, receiving a Lifetime Achievement Award from the Portland Association of Black Journalists in 1993. She also worked as a social worker, aiding displaced Black Portlanders after the Vanport flood. Bogle had the distinction of being the quilter who had lived in Oregon the longest, with her family tracing its roots in the state back to 1863. Bogle died in 2003.

June Borders Brown, born in Texas and heavily involved with the Portland Chapter of the Links. Brown died in 2001.

Ozella Harris Canada, born in Oklahoma, served as president of the Urban League and the National Council of Negro Women. Canada died in 1980.

Mildred Jackson Love, born in Texas, worked for the Selective Service and the IRS. Love died in 1999.

Sarah E. Mayfield, born in Kentucky, was a licensed practical nurse and bookkeeper before becoming a counselor at the House of Exodus. Mayfield died in 1999.

Martha Kiser Payne, born in Texas, was named Oregon Mother of the Year in 1977 by the now-defunct Oregon Journal, and was a longtime volunteer with United Way. Payne died in 1982.

Lylla Toliver Phillips, born in Alabama, served on the board of the NAACP.

Mildred Squires Reynolds, born in Minnesota, served as the project’s co-chair and was a founding member of Links, as well as president of Jack & Jill of America’s Portland chapter. Her husband Walt was the first Black student admitted to the University of Oregon’s medical school. Reynolds died in 1991.

Eddie Mae Smith Rollins, born in Arkansas or Tennessee, was a nurse and a nanny. Rollins died in 1991.