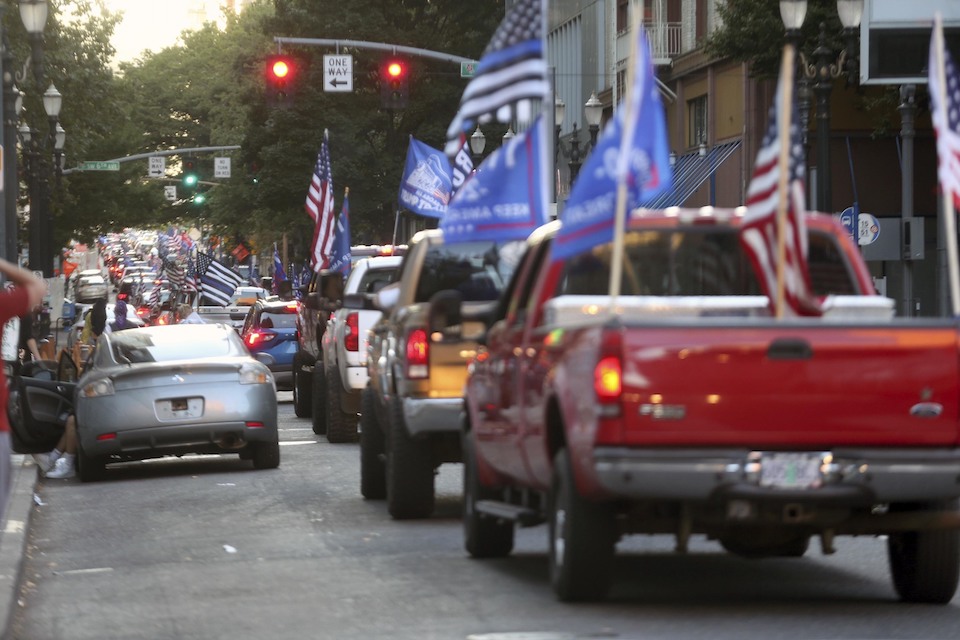 It wasn’t clear if the shooting was linked to fights that broke out as a caravan of about 600 vehicles was confronted by protesters in the city’s downtown.

Driving through crowds and macing out of vehicles at SW 4th and Washington. pic.twitter.com/dCNJxYlkYn

An Associated Press freelance photographer heard three gunshots and then observed police medics working on the body of the victim, who appeared to be a white man.

The freelancer said the man was wearing a hat bearing the insignia of Patriot Prayer, a right-wing group whose members have frequently clashed with protesters in Portland in the past.

Police did not release any additional details and were at the scene investigating late Saturday.

“Portland Police officers heard sounds of gunfire from the area of Southeast 3rd Avenue and Southwest Alder Street. They responded and located a victim with a gunshot wound to the chest. Medical responded and determined that the victim was deceased,” the Portland Police Bureau said in a statement.

Portland has been the site of nightly protests for more than three months since the police killing of George Floyd in Minneapolis.

Many of them end in vandalism and violence, and hundreds of demonstrators have been arrested by local and federal law enforcement since late May. The caravan arrived downtown just as a protest planned for Saturday was getting underway. Police made several arrests before the shooting and advised residents to avoid the city core.

The chaotic scene came two days after Trump invoked Portland as a liberal city overrun with violence in a speech at the Republican National Convention as part of his “law and order” re-election campaign theme. The caravan marked the third Saturday in a row that Trump supporters have rallied in the city.

A group of military veterans joined thousands of people as demonstrations continued in Portland on Friday night. https://t.co/5pTOH6sbGg

Trump and other speakers at this week's convention evoked a violent, dystopian future if Democratic presidential hopeful Joe Biden wins in November and pointed to Portland as a cautionary tale for what would be in store for Americans.

The pro-Trump rally's organizer, who coordinated a similar caravan in Boise, Idaho, earlier in the week, said in a video posted on Twitter Saturday afternoon that attendees should only carry concealed weapons and the route was being kept secret for safety reasons.

The caravan had gathered earlier in the day at a suburban mall and drove as a group to the heart of Portland. As they arrived in the city, protesters attempted to stop them by standing in the street and blocking bridges.

Videos from the scene showed sporadic fighting, as well as Trump supporters firing paintball pellets at opponents and using bear spray as counter-protesters threw things at the Trump caravan.

The shooting happened shortly before 9 p.m. Pacific, several hours after the caravan began arriving in Portland.

The Black Lives Matter demonstrations usually target police buildings and federal buildings. Some protesters have called for reductions in police budgets while the city’s mayor and some in the Black community have decried the violence, saying it’s counterproductive.

Early Saturday morning, fires set outside a police union building that is a frequent site for protests prompted police to declare a riot.

An accelerant was used to ignite a mattress and other debris that was laid against the door of the Portland Police Association building, police said in a statement. At least one dumpster had also been set on fire in the street nearby.

The commotion followed a sit-in in the lobby of the Portland mayor’s condominium building Friday night.