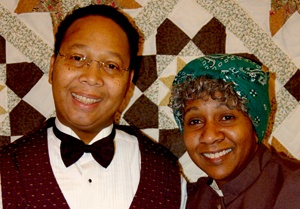 In 1990, President George H. W. Bush declared March 10 to be Harriet Tubman Day. Tubman died March 10, 1913. Harriet Tubman Day is dedicated to those who are willing to be of service to humanity and recognize all individuals who struggled to end tyranny and oppression.
"A Visit with Harriet Tubman, Her Stories about Family, Faith and Freedom," will be performed by Karol and James Brown. It promises to be an unforgettable experience for school age children to adults.
Brownstone Productions will present the historical portrayal of Tubman from 5 to 7 p.m., Saturday, March 15 at the Bethlehem Baptist Church, 4818 Portland Ave. in Tacoma.
The event is free but donations are accepted to benefit the Bethlehem Baptist Church Family Center.
Karol Brown, as 92-year-old Aunt Harriett, brings the audience as close to meeting Tubman as they will ever come with her engaging and spellbinding portrayal, while
James Brown captivates the audience with his stories and smooth tenor voice. The Browns are active members of local and national storytelling organizations, including the Tacoma's Fireside Storytellers League, Seattle Storytellers Guild, National Storytelling Network and the National Association of Black Storytellers Inc.