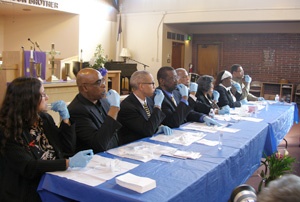 Nine pastors with the Albina Ministerial Alliance gathered Tuesday to publicly get tested for the HIV virus. The public test was a show of support for members of the community who do not know their HIV status and are afraid of getting tested. The pastors included (from left) Lynne Smouse Lopez of Ainsworth United COC, A.A. Wells of Emanuel Temple Pentecostal, W.G. Hardy of Highland United COC, T. Allen Bethel of Maranatha Church, Leroy Haynes of Allen Temple CME, Grace Osborne of Grace Covenant Church, Delsie Young of Bethesda Christian, and Robert Wisner of Under the Blood Ministries.
The tests were self administered and overseen by Multnomah County Health Department staff. Each pastor was given a swab, which they brushed against the inside of their mouths. The testing technique is far less invasive than a blood test. There will be a follow-up event "Annual HIV/AIDS Prayer and Healing Worship Service" at 4 p.m. March 16 at Bethel A.M.E Church, 5828 N.E. 8th Ave.
Haynes said the group is hoping this symbolic test will urge churches to end the silence about AIDS in the African American community and the larger community in general. African Americans are overly represented in AIDS deaths as well as new infections, accounting for some 50 percent of new cases in the United States, and a majority of these new cases are in young Black women. Primary cause of infection is heterosexual contact.
Hardy said he was 98 percent sure he did not have the virus that causes AIDS, he said that 2 percent caused a significant amount of worry.
"I can only imagine what it's like for (those who are unsure)," he said. "… we stand by them."
Lopez said there needs to be a high profile advertising campaign that encourages people to get regularly tested. "No longer can we turn aside and let others fight the war for us," said Haynes. "We call on every church to sound the trumpet, get educated, get tested."