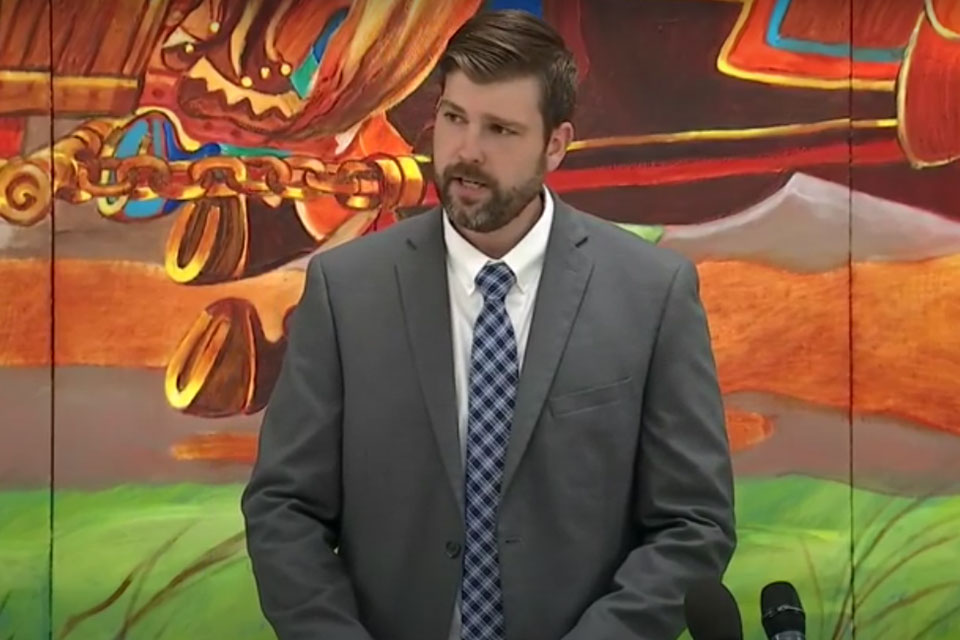 Hundreds of protesters will see non-violent misdemeanor charges against them dropped thanks to a policy change in the Multnomah County District Attorney’s office.

DA Mike Schmidt announced last week that his office will not prosecute non-violent misdemeanor cases that have been levied at protesters since late May, including interference with a police officer, disorderly conduct, criminal trespass, attempting to escape arrest, lower levels of harassment, and some cases of rioting. His office will presumptively decline to pursue such charges going forward.

“I will also be directing my deputies to take a particularly hard look at cases involving resisting arrest and assault of a public safety officer, if those cases occurred while an individual was being tear-gassed or otherwise exposed to a use of force at the time of the resistance,” Schmidt said during an Aug. 11 press conference.

Schmidt made the announcement after the 74th consecutive night of Portland protests in response to the murder of George Floyd, who died during an arrest by Minneapolis police officers.

“Quite frankly, it is the criminal justice system that people are demonstrating and speaking out about,” Schmidt told The Skanner.

“Using the very system that’s being criticized to restrict speech -- that kind of action should meet the highest level of scrutiny and show the most amount of restraint before you go to that, just by the very nature of the conflict of interest that is inherent in managing protests of this nature.”

Schmidt added, “I’ve seen multiple DAs across the country make similar decisions about focusing their resources on property damage and violence, and understanding that the charges that don’t involve those things are a lesser public safety priority, and also have the potential to chill speech of people who are out demonstrating.”

Schmidt was only in his second week serving as DA, but told The Skanner he began considering the policy when former DA Rod Underhill announced an early retirement in June. Schmidt had been expected to take elected office on Jan.1, but was appointed by Gov. Kate Brown to serve the remainder of Underhill’s term.

In announcing the new policy, Schmidt was joined by some members of his 15-person transition team.

Lakayana Drury, member of DA Mike Schmidt's transition team, called for redirecting valuable resources to support communities of color.“This is not an attack on officers, an affront to the system,” Lakayana Drury, co-chair of Portland Committee on Community-Engaged Policing and founder of Word is Bond, said during the press conference. “It is saying that we must prioritize Black lives and we must focus on our community, and until that we cannot thrive and Portland cannot be the city that it pretends to be.”

Kevin Modica, a former assistant chief with the Portland Police Bureau and a current member of Schmidt’s transition team, agreed.

Former Portland Police Assistant Chief Kevin Modica is on DA Mike Schmidt's transition team and urged law enforcement not to balk at new changes to prosecution policy.“I say this is not anything to be afraid of, and I’m speaking directly to those that are professionals in public safety: The move towards reform and changing systemic issues has been an ongoing process,” Modica said. “It does not mean you cannot do your job.

"But it does mean after you’ve done your job, you do not get to hold on to your arrest like a caged animal or like a pet.

You must know that you have just done your job and it is now going through the criminal justice system, and the right decisions will be made.”

Schmidt said he met with representatives of the Portland Police Bureau and incorporated some of their feedback before instituting the new policy.

“And we wanted to design a policy that is over-inclusive in protecting somebody’s ability to speak -- we thought it was so fundamental and so important to our democracy.”

Schmidt added, “(The police’s) biggest concern -- and it’s my concern too -- is officer safety,” Schmidt told The Skanner. “And their worry was that they needed the threat of prosecution for these lower-level, even non-violent crimes, to protect their officers’ safety. And I respect that and I understand their concerns.”

Of the approximately 550 cases that have been referred to the DA’s office since May 29, about 400 are misdemeanors. Schmidt said that because of court delays caused by the COVID-19 pandemic, trials for the latter charges were not likely to happen for at least a year, undermining the deterrent factor to prosecuting them at all.

Schmidt and his team feared further strain on city resources because most of those cases would likely go to trial.

“I think the very nature of a protest case is you are trying to call attention to the issue that you are trying to raise,” Schmidt told The Skanner. “In just your run-of-the-mill typical cases that our prosecutors would see, a shoplift or something like that, there’s not the added political benefit of going to trial on that case. But in a protest case, your whole point of protesting in the first place was to draw people’s attention to the problem that you’re trying to highlight. And so I think by the very nature of the type of case, we would see a much greater percentage of these ending up going to trial because it would offer yet another stage and venue for people to raise those issues.”

“When we talk about the knee that was in the neck of George Floyd, it’s not just a knee in the neck in terms of law enforcement, but educationally. Economically. What future are we creating for our community members?” Drury said during the press conference. “So the question is, will we choose to use our resources--very valuable and limited resources--to prosecute our neighbors who are exercising their First Amendment rights to support Black people? Or will we instead use those limited resources to uplift and battle against White supremacy at all levels within our city?”

Modica praised Schmidt for using his first few days as DA “to be proactive, not reactive; to be prosocial instead of non-social.”

“I think Mike Schmdit is going to be very critical in ending the extraction of safety, health and wealth from our communities,” Modica said, “particularly Black communities, brown communities, immigrant communities, and communities that call for social justice. There’s been a demand for public safety and that spans a very wide canvas. I say to all of you: We are fortunate to have Mike Schmidt as the number one law enforcement official in Multnomah County, but I also say to DA Mike Schmidt, as the demand has been made, we will also be watching. We will hold you accountable.”