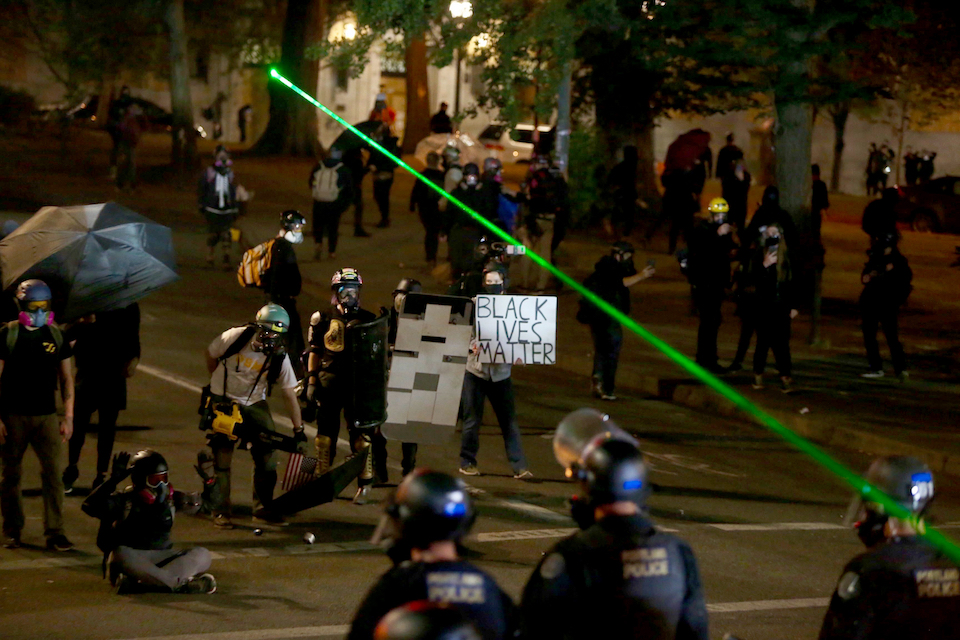 PORTLAND, Ore. (AP) — Four people were arrested overnight in Portland, Oregon, as police dispersed a protest that was headed toward the offices of the police union, authorities said Saturday.

The Portland Police Bureau declared the demonstration of a couple hundred people an unlawful assembly Friday night, saying people were throwing fireworks, golf balls and chunks of concrete at officers. Officers said they used crowd control munitions but no CS tear gas to disperse the crowd.

Some of the protesters carried heavy wooden shields and wore gas masks and other protective gear, authorities said.

Demonstrations, often violent, have happened nightly in Oregon’s biggest city for more than two months following the killing of George Floyd by Minneapolis police. Participants have repeatedly broken into the offices of the Portland Police Association, vandalized them and set fires.

Police said that one officer suffered minor injuries after being repeatedly punched in the head and another from being struck by a stick, bat or other object. The four arrests were for investigation of charges that included assault on an officer, resisting arrest and criminal mischief.

Police said they disengaged as the crowd dwindled in an attempt to further deescalate the situation, but a small group nevertheless vandalized the union headquarters early Saturday.

Protests in Portland last month outside the federal courthouse saw demonstrators clashing with federal agents dispatched to the city to protect the facility.

The demonstrations shrank after a drawdown of the agents, who were replaced by Oregon state troopers. But protests turned violent again over the last week, mostly near a police union headquarters building miles from the federal courthouse.