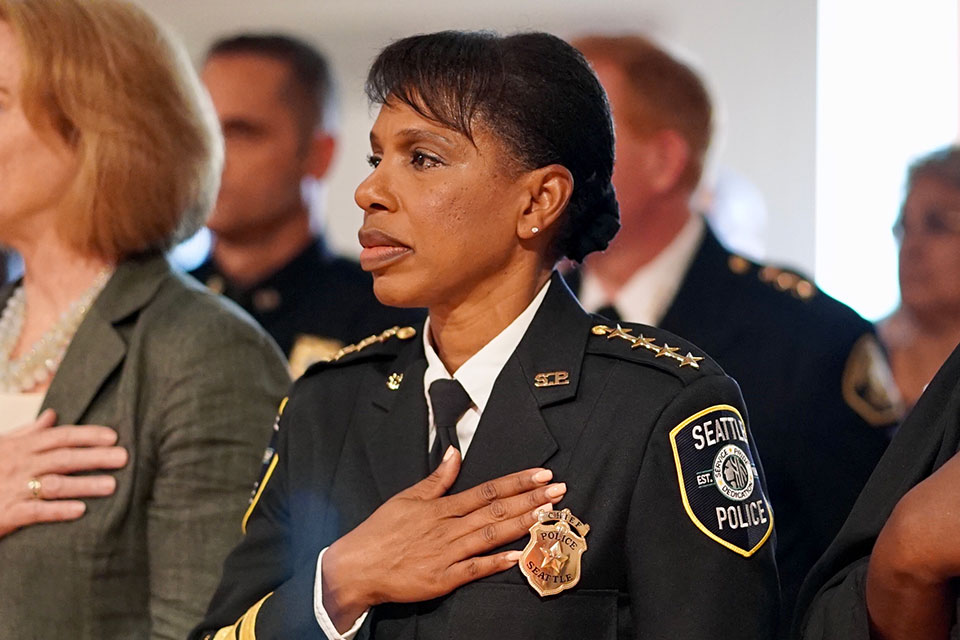 SEATTLE (AP) — Seattle's police chief says she is stepping down, a move made public the same day the City Council approved reducing the department by as many as 100 officers through layoffs and attrition.

Carmen Best, the city’s first Black police chief, said in a letter to the department that her retirement will be effective Sept. 2 and the mayor has appointed Deputy Chief Adrian Diaz as the interim chief, KING-TV reported Monday. Councilmembers had approved the cuts Monday.

“I am confident the department will make it through these difficult times,” Best said in the letter. “You truly are the best police department in the country, and please trust me when I say, the vast majority of people in Seattle support you and appreciate you. ... I look forward to seeing how this department moves forward through the process of re-envisioning public safety.

"I relish the work that will be done by all of you.”

In an email to police Mayor Jenny Durkan said she she accepted Best’s decision “with a very heavy heart.” 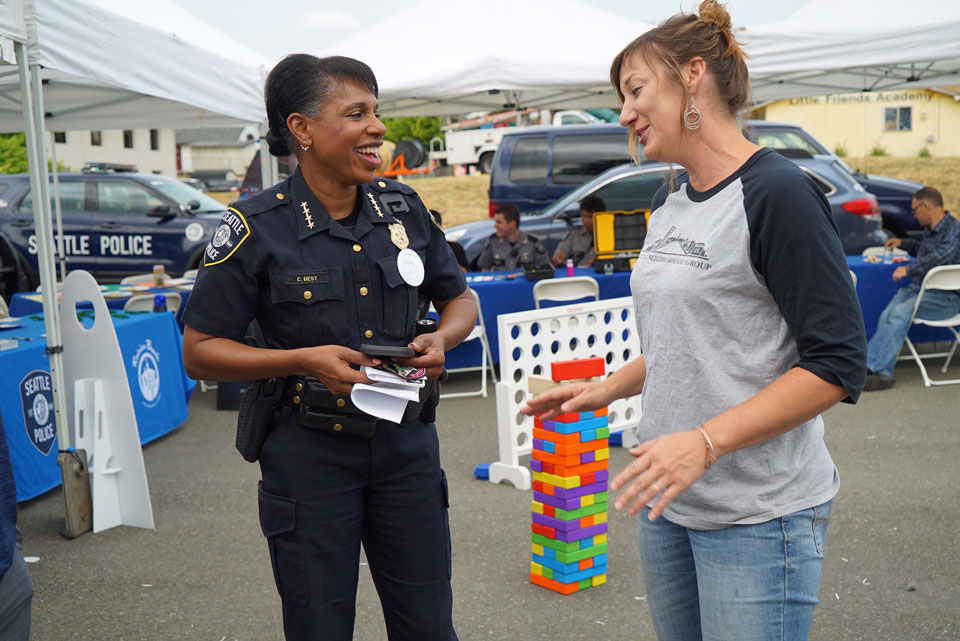 Seattle Police Chief Carmen Best enjoys a conversation at a Seattle community event in August 2018. (photo by Susan Fried)“I regret deeply that she concluded that the best way to serve the city and help the department was a change in leadership, in the hope that would change the dynamics to move forward with the City Council,” Durkan wrote.

The mayor picked Best in July of 2018 to lead the department. She had been serving as interim chief.

A military veteran, Best joined the department in 1992 and had worked in a wide variety of roles, including patrol, media relations, narcotics and operations and deputy chief.

Cuts to the annual police budget of about 1%

Cuts to the department have been supported by demonstrators who have marched in the city following the police killing of George Floyd in Minneapolis but strongly opposed by Durkan and Best. 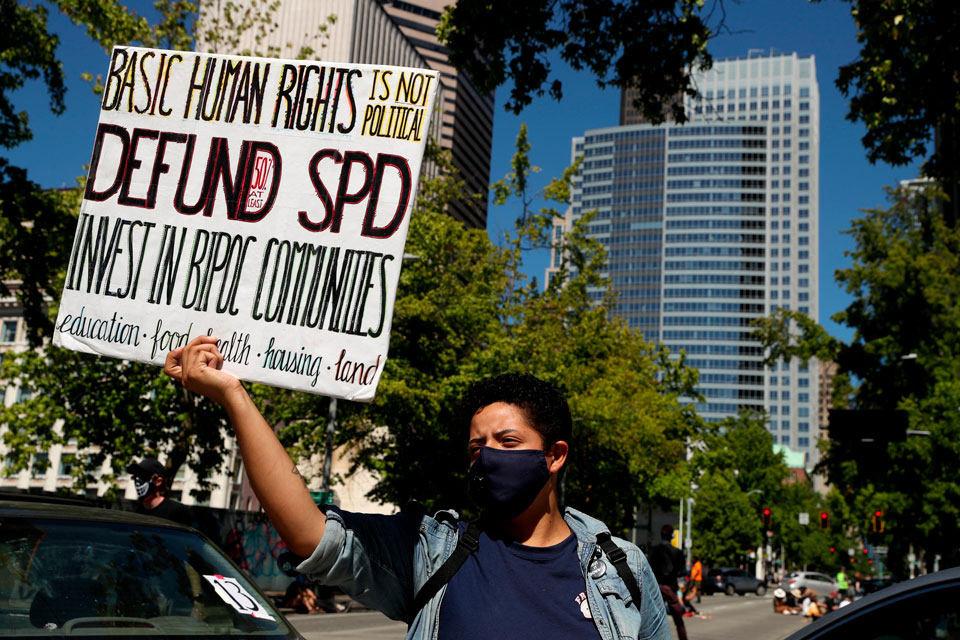 Seattle currently has about 1,400 police officers and the reductions fell far short of the 50% cut to the department that many Black Lives Matter protesters are seeking. Several council members on Monday said the changes were a starting point in a long process to reimagine policing and public safety.

The City Council also cut Best’s roughly $285,000 annual salary and the pay of other top police leaders, although the final cuts to Best's salary were significantly more modest than those approved last week. The council plan also takes officers off a team that removes homeless camps. 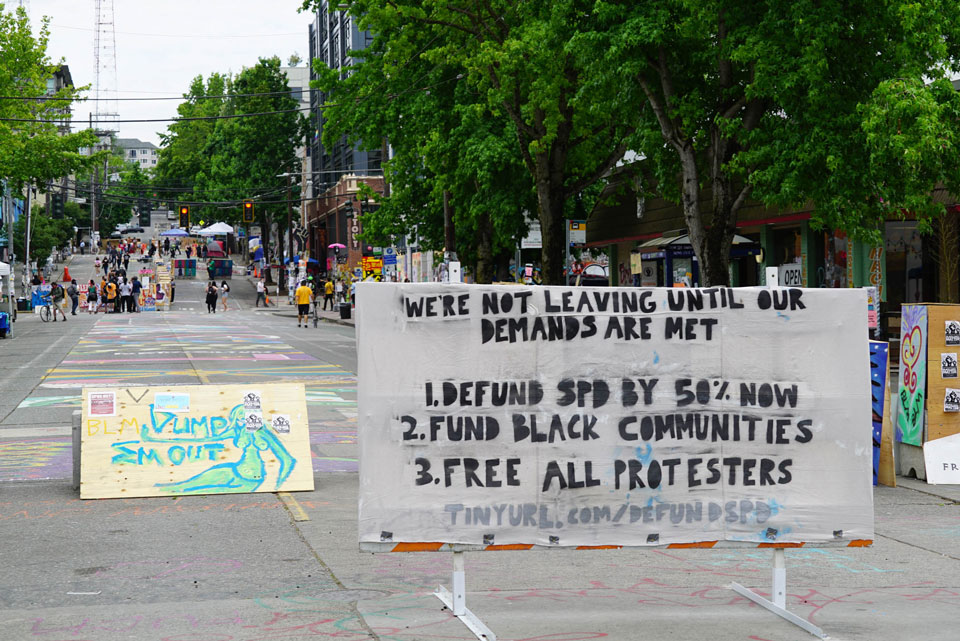 The area in Seattle designated CHOP, Capital Hill Occupation Protest was ordered cleared by Seattle Mayor Jenny Durkan on July 1, 2020. The Mayor sited an increase in violence and public safety issues for her executive order. Several dozen people were arrested and all of the barricades as shown in this photo were removed. (photo by Susan Fried)"While we can’t do everything in this summer rebalancing package, we have set the path forward for tremendous work in front of us as a council and as a city," Council member Teresa Mosqueda said.

Durkan and Best had urged the council to slow down its discussions about police budgets, saying the issue could be taken up in earnest when the 2021 city budget is considered. They also said any layoffs would disproportionately target newer officers, often hired from Black and brown communities, and would inevitably lead to lawsuits.

Durkan has proposed cutting about $20 million from the police budget this year largely because of reduced revenues amid the COVID-19 pandemic. Last month, the mayor sketched out a plan to reduce the police budget by about $75 million next year by transferring parking enforcement officers, the 911 call center and other areas out of the department.

“It is unfortunate Council has refused to engage in a collaborative process to work with the mayor, Chief Best, and community members to develop a budget and policies that respond to community needs while accounting for — not just acknowledging — the significant labor and legal implications involved in transforming the Seattle Police Department,” Durkan said in a statement after the vote.