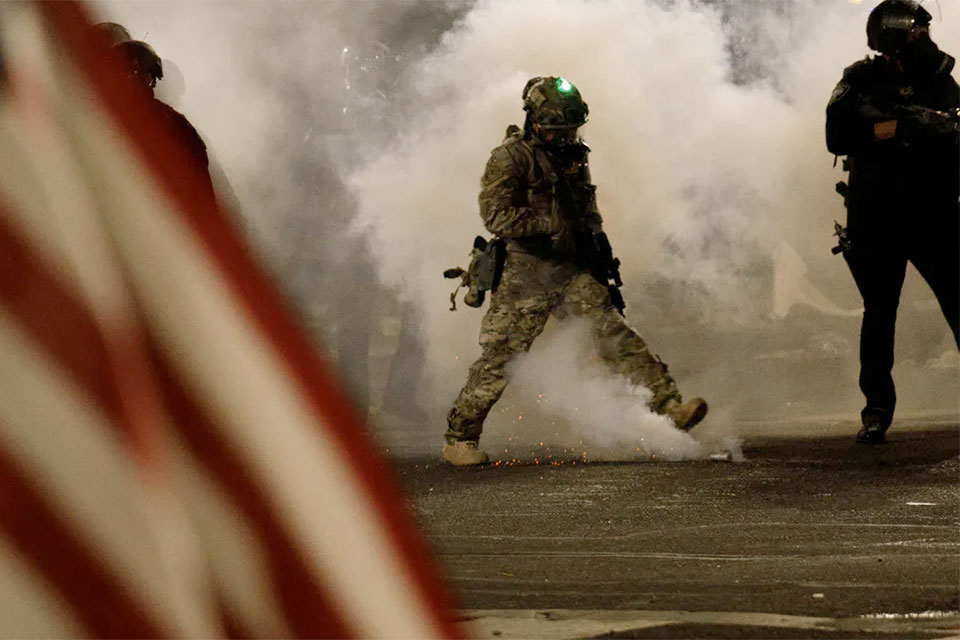 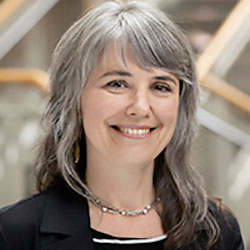 Sarah J. Adams is Assistant Professor at the University of Oregon School of Law whose academic expertise includes local government law.President Donald Trump has announced that the U.S. Department of Justice will send a “surge of federal law enforcement” into American cities run by “extreme politicians” who are on an “anti-police crusade,” including Chicago, Kansas City, Albuquerque, Cleveland, Detroit and Milwaukee.

Those cities may soon see legal battles like the ones in Portland, Oregon, where four notable lawsuits challenge the actions of federal agents who, under the auspices of the Department of Homeland Security, were purportedly sent to protect federal property on the July 4th weekend and still remain.

As a state and local government law scholar, I believe a surge of hundreds of federal officers into cities throughout the United States would represent an unprecedented expansion of the role of the federal government into local police matters.

Together, the Portland lawsuits ask the court to delineate and enforce, constitutional limits on the federal government’s ability to override state and local law enforcement and use police tactics that violate protesters’ constitutional rights.

Since May 29, Portlanders have marched, sung, chanted and stood together in Portland to demand racial justice and condemn police violence against Black Americans.

Local officials and observers describe a fringe minority of protesters pointing laser pointers at officers, throwing cans, breaking windows and setting dumpsters and bags of garbage on fire, and shooting fireworks at the federal courthouse. One person was arrested for allegedly attacking a federal officer with a hammer.

In response to some of these actions, the Department of Homeland Security has sent paramilitary-style units to Portland. The president has characterized the operation as limited to protection of federal property and personnel and enforcement of federal laws – but also as restoring public safety after liberal politicians “have put the interests of criminals above the rights of law-abiding citizens.” 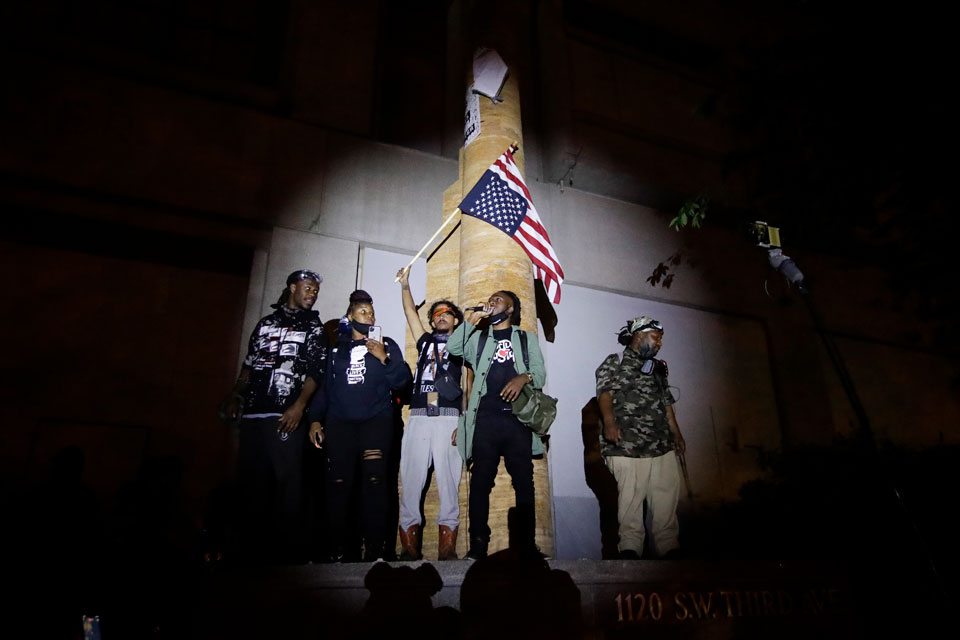 A group of demonstrators addresses the crowd during a Black Lives Matter protest at the Mark O. Hatfield U.S. Courthouse on Thursday, July 23, 2020, in Portland, Ore. On the streets of Portland, a strange armed conflict unfolds night after night. It is raw, frightening and painful on both sides of an iron fence separating the protesters on the outside and federal agents guarding a courthouse inside. This weekend, journalists for The Associated Press spent the weekend both outside, with the protesters, and inside the courthouse, with the federal agents, documenting the fight that has become an unlikely centerpiece of the protest movement gripping America. (AP Photo/Marcio Jose Sanchez)State and local officials and observers say those federal agents are detaining and arresting innocent protesters. They also say federal officers have fired non-lethal rounds, pepper balls and tear-gas canisters at peaceful protesters, journalists, medics and legal-rights observers.

In a court filing, the city says the presence of heavily armed federal agents is not keeping order, but rather “escalating violence, inflaming tensions in our City, and harming Portlanders.” The city also says, “Serious and credible allegations have been made that the federal government has effectively kidnapped people off Portland streets, among other abuses of power.”

Independent monitors sue to protect themselves

The first case, Index Newspapers, Inc. v. City of Portland, began as a lawsuit by six journalists and legal observers seeking to stop Portland police from assaulting news reporters, photojournalists and legal observers documenting the police’s violent response to protests. After the arrival of federal agents in Portland, the lawsuit expanded to include the U.S. Department of Homeland Security and the U.S. Marshals Service.

On July 23, U.S. District Court Judge Michael Simon rejected federal claims that “the force used on Plaintiffs [was] ‘unintended consequences’ of crowd control.” He issued a temporary restraining order barring federal agents from “arresting, threatening to arrest, or using physical force directed against any person whom they know or reasonably should know is a Journalist or Legal Observer.”

The judge also barred federal agents from “seizing any photographic equipment, audio- or videorecording equipment, or press passes … or ordering such person to stop photographing, recording, or observing a protest.” 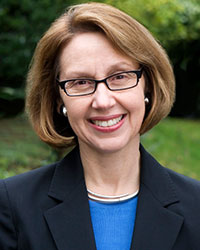 The suit says citizens rightly fear “being thrown into a van by anonymous agents,” which infringes on their First Amendment rights to protest. It also says citizens have Fourth and Fifth Amendment rights not to be snatched “off of the streets without probable cause” by unidentified officers in unmarked cars.

On Friday, Judge Mosman denied Rosenblum’s request to immediately bar such behavior by federal agents, saying that Rosenblum had not provided enough evidence to show federal agents were engaging in a pattern of unlawful detentions and finding the state did not have standing to seek the temporary order.

“This week we asked the United States District Court for the District of Oregon to grant a temporary restraining order relating to the issue of forcible detention of Oregon residents by federal agents sent to Portland for the alleged purpose of protecting federal property. The stakes in this case are high, and I am disappointed that Judge Mosman did not rule in favor of a TRO and found instead that we lacked standing to bring the case in the first place. I believe all Oregonians have a right to know which federal law enforcement agencies are policing our streets, and why they are detaining peaceful protesters.

“In last Monday’s two-hour hearing, the judge expressed concern with the legality of the federal law enforcement tactics we are seeking to stop.  While today the court declined to issue an immediate order putting a stop to those tactics, we are, nevertheless, hopeful these abuses will stop and no other Oregonians will be subject to them or to the chilling effect they have on the right to engage in peaceful protest.

“As I argued to the court at the hearing, these are extraordinary times, and very extraordinary circumstances. Ultimately, our goal was to ensure our people’s state and federal constitutional rights are protected. We want our cities to be safe, and we do not want our residents to live in fear of a police-state where people are grabbed off the street by unidentified armed men in unmarked cars and taken away—with no explanation.

“While I respect Judge Mosman, I would ask this question: If the state of Oregon does not have standing to prevent this unconstitutional conduct by unidentified federal agents running roughshod over her citizens, who does? Individuals mistreated by these federal agents can sue for damages, but they can’t get a judge to restrain this unlawful conduct more generally. Today’s ruling suggests that there may be no recourse on behalf of our state, and if so that is extremely troubling.

“I want to thank our Oregon Department of Justice Trial Team including Steve Lippold and Sheila Potter for their extraordinary efforts in a short timeframe. We will continue to seek ways to fight to ensure the rights of every Oregonian to peacefully protest are preserved.”

As the parties prepare their next moves in this case, governors throughout the country will likely be watching to see whether Judge Mosman recognizes a state’s interest in local police matters and its standing to sue federal agencies to protect the constitutional rights of its citizens.

Citizens sue to protect their own rights

The third case focuses on the 10th Amendment, which says that, except specific federal powers spelled out in the Constitution, all other powers are reserved to the states and its citizens.

Those bringing the suit, which include the First Unitarian Church of Portland, say federal law enforcement agencies are infringing on Oregon’s sovereign powers to police Oregon streets. They say the deployment of federal law enforcement officers in Portland infringes on the power of Oregon citizens to hold state and local police accountable.

The lawsuit also argues that the federal response violates the First Amendment rights of the First Unitarian Church of Portland, whose religious practice includes activism and protest in the face of injustice.

While the lawsuit acknowledges that the federal government has a right to protect its property and personnel, it claims that “defendants have far exceeded these constitutional limitations” while policing in Portland.

What happens next in this case depends in part on whether the plaintiffs ask for an immediate order requiring the federal agencies to leave local policing to state and local law enforcement.

The suit claims the attacks violate the medics’ First and Fourth Amendment rights and seeks damages for injuries to the medics. On Friday, the medics also asked the court for an order stopping law enforcement from further targeting and attacking medics. The court will likely rule on this request in the coming week.

The theme of urban violence used by Trump plays on white fears of Black people and those living in extreme poverty.

Trump uses coded racist language to paint a picture of cities “plagued by violent crime,” “heinous crimes” and “bloodshed.” He claims that local leaders have abdicated their duty to protect citizens, requiring the federal government to step in.

The nation was founded on the principle that freedom is safeguarded by two governments, a federal government with specific, limited powers, and state governments with all other powers.

The Constitution reserves to the states an expansive power to police because that allows for law enforcement policies that reflect local circumstances and customs, and are responsive to the concerns of local citizens – which is exactly what Black Lives Matter and other protesters are now demanding in Portland and throughout the country.

Sarah J. Adams is an Assistant Professor at the University of Oregon School of Law whose academic expertise includes local government law.