Thousands Protest in Portland as Feds Respond with Tear Gas 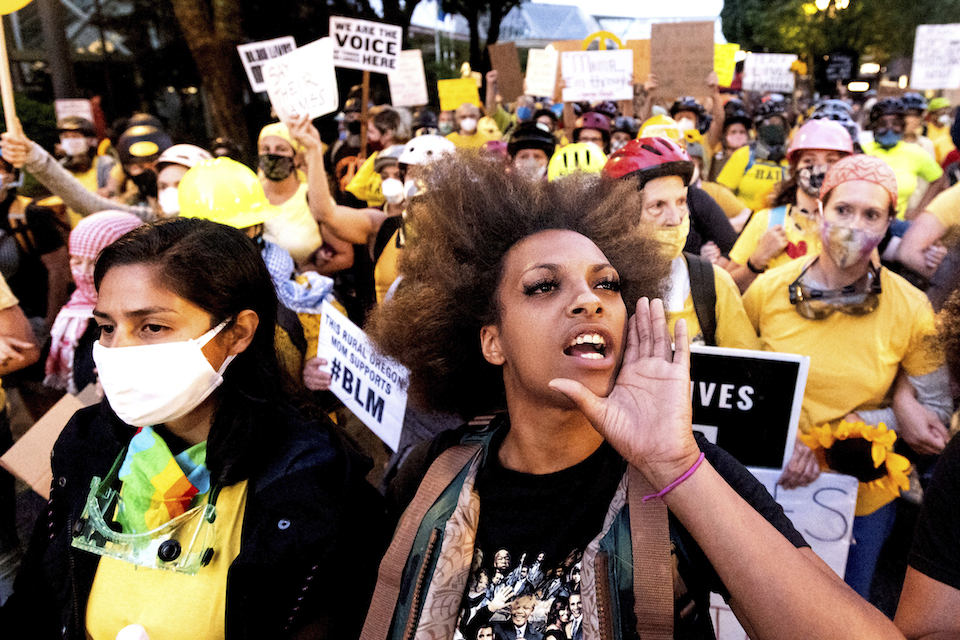 PORTLAND, Ore. (AP) — A persistent crowd of protesters remained outside the federal courthouse in Portland, Oregon, into the early hours of Saturday as fireworks were shot at the building and plumes of tear gas, dispensed by U.S. agents, lingered above.

Thousands of people gathered in Portland streets hours after a U.S. judge denied Oregon’s request to restrict federal agents’ actions when they arrest people during protests that have roiled the city and pitted local officials against the Trump administration.

By 8 p.m. hundreds of people, most wearing masks and many donning helmets, had already gathered near a fountain, one spot where groups meet before marching to the Hatfield Federal Courthouse and the federal agents there. They chanted and clapped along to the sound of thunderous drums, pausing to listen to speakers.

Among the groups represented were: Healthcare Workers Protest, Teachers against Tyrants, Lawyers for Black Lives, a “Wall of Moms,” and a

By 9 p.m. the crowd grew to several thousand. People, pressed shoulder to shoulder, packed the area and overflowed into the streets as they chanted "Black Lives Matter” and “Feds go home” to the sound of drums.

As the night carried on protesters vigorously shook the fence surrounding the courthouse, shot fireworks towards the building and threw glass bottles. Many times these actions were met by federal agents using tear gas and flash bangs.

The flow of tear gas caused protesters to disperse, some becoming sick as others remained towards the front of the courthouse with leaf blowers directing the gas back to the courthouse. Federal agents had leaf blowers of their own to counteract.

Daniel Pereyo was one protester who was tear-gassed.

Pereyo said he had been at the nearby park watching drummers and fireworks being shot, when his face and eyes began to burn.

“It's extremely painful,” he said. “It's not the worst pain ever, but it is discomforting and it's distracting.”

As the clouds of gas floated down the street, protesters would swiftly regroup and return to chant and shake the fence that separates the people on the street from federal agents and the courthouse.

Federal Protective Service declared the gathering as “an unlawful assembly” and cited that officers had been injured.

The federal agents, deployed by President Donald Trump to tamp down the unrest, have arrested dozens during nightly demonstrations against racial injustice that often turn violent.

Democratic leaders in Oregon say federal intervention has worsened the two-month crisis, and the state attorney general sued to allege that some people had been whisked off the streets in unmarked vehicles.

U.S. District Judge Michael Mosman said the state lacked standing to sue on behalf of protesters because the lawsuit was a “highly unusual one with a particular set of rules.”

Oregon was seeking a restraining order on behalf of its residents not for injuries that had already happened but to prevent injuries by federal officers in the future. That combination makes the standard for granting such a motion very narrow, and the state did not prove it had standing in the case, Mosman wrote.

Legal experts who reviewed the case before the decision warned that he could reject it on those grounds.

A lawsuit from a person accusing federal agents of violating their rights to free speech or against unconstitutional search and seizure would have a much higher chance of success, Michael Dorf, a constitutional law professor at Cornell University, said ahead of the ruling.

Feds say they have duty to protect building

The clashes in Portland have further inflamed the nation’s political tensions and triggered a crisis over the limits of federal power as Trump moves to send U.S. officers to other Democratic-led cities to combat crime. It’s playing out as Trump pushes a new “law and order” reelection strategy after the coronavirus crashed the economy.

Protesters in Portland have been targeting the federal courthouse, setting fires outside and vandalizing the building that U.S. authorities say they have a duty to protect. Federal agents have used tear gas, less-lethal ammunition that left one personcritically injuredand other force to scatter protesters.

US attorney: protests “dangerous and volatile”

David Morrell, an attorney for the U.S. government, called the motion “extraordinary” and told the judge in a hearing this week that it was based solely on “a few threadbare declarations” from witnesses and a Twitter video. Morrell called the protests “dangerous and volatile.”

Army veteran Clint Hall says the federal presence here is wrong. He says it has only served to inflame tensions. pic.twitter.com/Hkywjgnwo2

Rosenblum said the ramifications of the ruling were "extremely troubling."

“While I respect Judge Mosman, I would ask this question: If the state of Oregon does not have standing to prevent this unconstitutional conduct by unidentified federal agents running roughshod over her citizens, who does?" Rosenblum said in a statement. "Individuals mistreated by these federal agents can sue for damages, but they can’t get a judge to restrain this unlawful conduct more generally.”

Before the federal intervention, Mayor Ted Wheeler and other local leaders had said a small cadre of violent activists were drowning out the message of peaceful protesters.

But the Democrat, who was tear-gassed this week as he joined protesters, says the federal presence is exacerbating a tense situation and he’s repeatedly told them to leave.

In the lawsuit, Oregon had asked the judge to command agents from the U.S. Department of Homeland Security, the Customs and Border Protection, the Federal Protective Service and the U.S. Marshals Service to stop detaining protesters without probable cause, to identify themselves before arresting anyone and to explain why an arrest is taking place.

Agents have arrested 28 people in Portland this week, including seven from Thursday night's protests, when they used tear gas to force thousands of demonstrators from crowding around the courthouse.

Protesters projected lasers on the building and tried to take down a security fence. They scattered as clouds of gas rose up and agents fired crowd control munitions.

The Department of Homeland Security said that during Thursday’s demonstrations one federal officer was injured and that “no injuries to protesters or rioters have been reported.”

Wolf said Tuesday that at least 43 people have been arrested on federal charges at that point.

They face federal charges including assaulting federal officers, arson and damaging federal property, U.S. Attorney Billy J. Williams said. All the defendants are local and were released after making a court appearance.

U.S. officers “working to protect the courthouse have been subjected to nightly threats and assaults from demonstrators while performing their duties,” according to a statement from Williams' office.

I was in the park, about 15 yards from the sidewalk, when they shot me in my PRESS helmet.

I stumbled to the People's Ambulance (that's what I can it anyway), and they checked me out.

I took a few flicks in the ambulance. Can't wait to file my lawsuit. pic.twitter.com/WkEb7jNK3K

Sara Cline reported from Salem. Cline is a corps member for the Associated Press/Report for America Statehouse News Initiative. Report for America is a nonprofit national service program that places journalists in local newsrooms to report on under-covered issues.