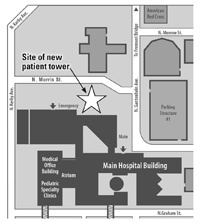 Last month, Legacy Emanuel hospital treated more children than in any February since the hospital opened.  Hospital staff expect to see children with respiratory infections in the winter and spring, just as they look for sports related injuries in the summer. Yet the sheer number of children seeking help was alarming, says Carla Harris, chief administrative officer of the Legacy Emanuel Children's Hospital.
"The volume of (patients) has increased steadily … all year long," she said. There has been a general uptick in disease groups in children …"
The increase is partly due to a rise in rates of illness such as asthma, and partly because the hospital is aiming to reach more children who need specialist care. But because the hospital has been operating at about 90 percent capacity for some time, some services are stretched,  said April Whitworth, chief administrative officer for Legacy Emanuel.
"It means longer waits in the emergency room, and it makes it difficult to place patients," she said.
That's the story behind the hospital plan to expand. Beginning this summer, construction crews will begin work on a new parking garage, to be followed by a seven-story tower and renovation of an existing Intensive Care Unit.
All seven levels of the new tower will house a Children's Emergency Department. Harris says the children's hospital – one of just two in Oregon that specialize in pediatric care  – plans to build on existing programs. Young patients will also be given their own rooms. When children are roomed with other children, it can create conflict, if only due to the crowded space.
"Families don't leave children at the hospital when they're sick," she said.
Each room will be fitted with a sleeping area for an accompanying adult, and private rooms also will be available for families. Children will also have their own emergency unit.
Best of all, says Whitworth, the hospital will have a state of the art kitchen, capable of producing "room service"—like orders that will meet the youngest patients' feeding schedules.

A History in the Community
After a year of serious planning, hospital administrators are still working to finalize architectural plans, to hire a general contractor and arrange for subcontractors.
"You have to do your due diligence," said Whitworth. "We have to make sure we're building for (expected population) growth."
But they are making efforts to hire local and minority owned businesses. Consultant Faye Burch has been advising the hospital about diversity hiring goals, and Serena Stoudamire has been hired as a community outreach specialist. Burch says the level of community involvement by the hospital has changed a lot over the years.
In the late 1960s and early 70s, Emanuel was planning an expansion that would displace a number of longtime neighborhood residents. Back then, neighborhood residents felt strongly that hadn't been involved early enough or given enough of a say in the planning.  To address the issue, the American Friends Service Committee, a Quaker organization of multiple faiths, formed the Emanuel Displaced Persons Association. Many residents believed they were not paid a fair market value for their homes and were not justly compensated for moving. Then in 1970, the Fair Market Relocation Act provided additional funds to help relocated homeowners and renters move into better homes. About 200 people and 20 businesses were relocated by the time money for the project dried up Emanuel stopped construction. That's according to a local history book,   "A Brief History of Urban Renewal in Portland" by Craig Wollner, John Provo and Julie Schablitsky.
But does Burch see a correlation between then and now?
"No," she says. "(Besides sheer growth), I would just guess that the same kind of community relations plan didn't exist."
This time around the community can expect some benefits from the expansion and fewer disruptions, the administrators said. For a start, the new tower and parking garage will be constructed on existing hospital land, so nobody will be displaced. In addition, the project will offer jobs for local construction crews, and may boost some local businesses, as well as creating new jobs in the hospital.
Burch and hospital administrators say they plan to reach out to a number of community groups and neighborhood organizations, let them know there will be an increase in construction traffic, and to discuss any concern about the project's impact on the community.
The cost of the project is estimated at $225 million to $250 million, and will take some 24 months to complete.