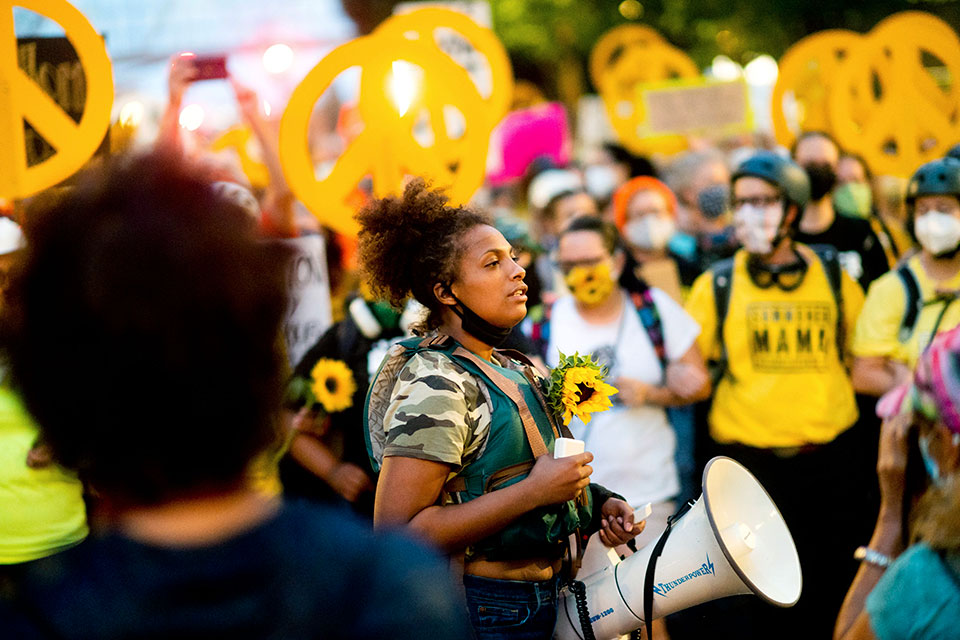 SALEM, Ore. (AP) — After George Floyd's death at the hands of Minneapolis police, people in Portland came out in droves to protest police brutality and racism, chanting that “Black lives matter.” As the weeks went by, the crowds dwindled to a few dozen and the protests increasingly turned violent.

Since President Donald Trump deployed militarized federal agents to the progressive city early this month, the numbers of protesters have swelled again into the thousands, including mothers wearing yellow shirts and dads armed with leaf blowers to drive away tear gas.

While the protests have taken on a new tone of opposition to federal intervention, Black leaders and protesters say the surge in activity — though often chaotic — hasn’t distracted from their anti-racist message. Instead, it's shined a spotlight on it.

Portland City Commissioner Jo Ann Hardesty, the first Black woman elected to that office, rejected the idea that the Black Lives Matter protests are being hijacked by white people.

“And we would be foolish to believe that we could stay focused just on Black lives and not address the physical assaults that are taking place.” 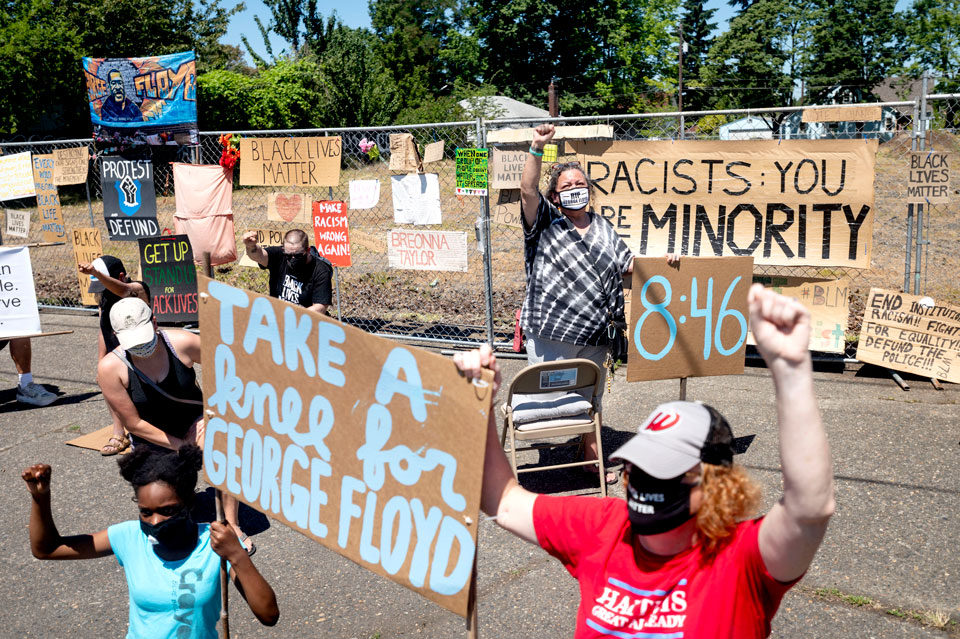 In this July 20, 2020 file photo protesters kneel in memory of George Floyd during a demonstration in Portland, Ore. From left to right are Rachelle Davis, 10, Charlie Westley and Karen Davis. Many Black protesters say the large crowds in response to the deployment of federal agents to the city have helped focus attention on their demonstrations against inequality and racism (AP Photo/Noah Berger,File)Federal agents have used tear gas, less-lethal ammunition and other force against protesters who have been targeting the U.S. courthouse with fires and other vandalism during two months of nightly demonstrations. Peaceful protesters have also been tear-gassed and hit by impact munitions. U.S. authorities say they must act to protect federal property and officers, while local leaders say their presence has made the situation more volatile and urge the agents to leave.

By being subjected to tear gas, nightsticks and pepper spray, “white people are stepping up and they’re seeing the brutality" that Black people normally experience, said white protester Carol Vogel Warner, who has an adopted Black son. “They’re feeling it.”

Portland police also have used tear gas and other force against protesters.

State Sen. Lew Frederick, a Black Democrat who's dodged pepper balls fired by federal agents at the protests, said the Trump administration “miscalculated” if it thought it could end the demonstrations with a show of force.

“It reignited the protest movement in Portland,” Frederick said, adding that he's seen more Black people demonstrating now than in the early days.

Those attending the protests are overwhelmingly white, a reflection of Oregon's makeup. Its population is only 2% Black, compared with 13% for the entire U.S., largely due to the state's racist past. Its Constitution excluded Blacks from living in Oregon until the clause was repealed in 1927. 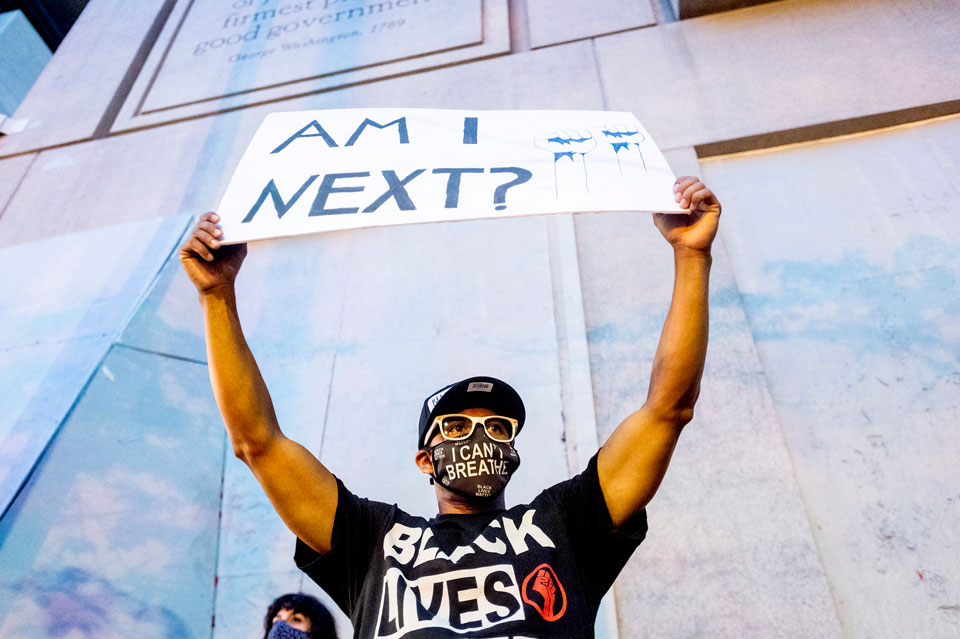 In this Monday, July 20, 2020, file photo, Romeo Ceasar holds a sign during a Black Lives Matter protest in Portland, Ore. Many Black protesters say the large crowds in response to the deployment of federal agents to the city have helped focus attention on their demonstrations against inequality and racism. (AP Photo/Noah Berger, File)Even this week, with the nation focused on the deployment of the federal agents and their tactics, white protesters chanted the names of Floyd, Breonna Taylor and other Black Americans who have been killed by police.

"We all raised a hand and we had some moments of silence, offering either prayers or chants or our silent love to those people who died,” she recalled.

The intervention in Oregon could be just the beginning of a clash between the Trump administration and Democratic leaders in cities nationwide. The White House announced this week that federal agents also will deploy to Chicago, Cleveland, Detroit, Milwaukee and Albuquerque, New Mexico, to combat rising crime.

The Movement for Black Lives, a coalition of more than 150 Black-led organizations across the U.S., said it remains “undeterred.”

“As we witness Portland becoming a war zone, we understand clearly that this is an attempt to intimidate not just protesters on the streets of Portland but to derail our movement in defense of Black lives,” said Chinyere Tutashinda, a coalition organizer. She called it “a failed strategy” designed to increase support for Trump’s re-election.

Some Black protesters, however, say that white people who have been throwing water bottles at law enforcement and causing vandalism are setting back the movement.

“If white people want to help us, this is not helping us.”

The protests are just one prong of the move to end police violence and racial discrimination and serve underserved communities, Frederick said. Another is changing laws and providing assistance.

After Floyd's death, Oregon lawmakers passed police accountability measures proposed by the People of Color Caucus, to which Frederick belongs.

And on July 14, 10 days after the federal deployment in Portland, lawmakers provided $62 million in federal coronavirus relief funding to Black people and businesses affected by the pandemic.

“That’s because of the People of Color Caucus and the kind of momentum that has been fostered," Frederick said.