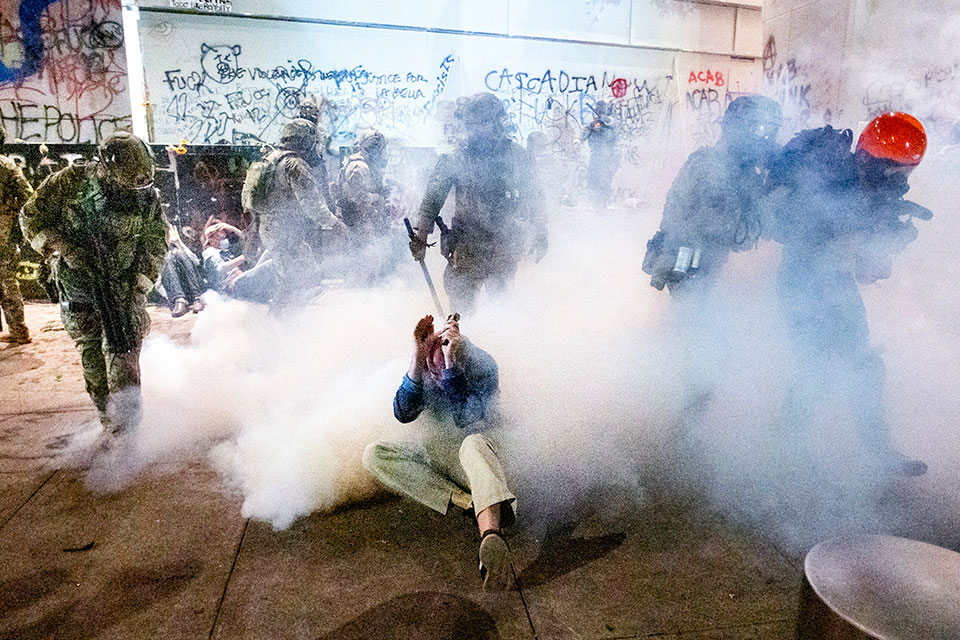 PORTLAND, Ore. (AP) — A federal judge heard arguments Wednesday on Oregon's request for a restraining order against federal agents sent to the state's biggest city to quell protests that have spiraled into nightly clashes between authorities and demonstrators.

The lawsuit, filed by Oregon Attorney General Ellen Rosenblum, alleges that federal agents sent by President Donald Trump have arrested people with no probable cause, whisked protesters away in unmarked cars and used excessive force to quell the unrest. It's part of growing pushback against the Trump administration's use of federal agents in Portland and its plans to do the same in other cities. 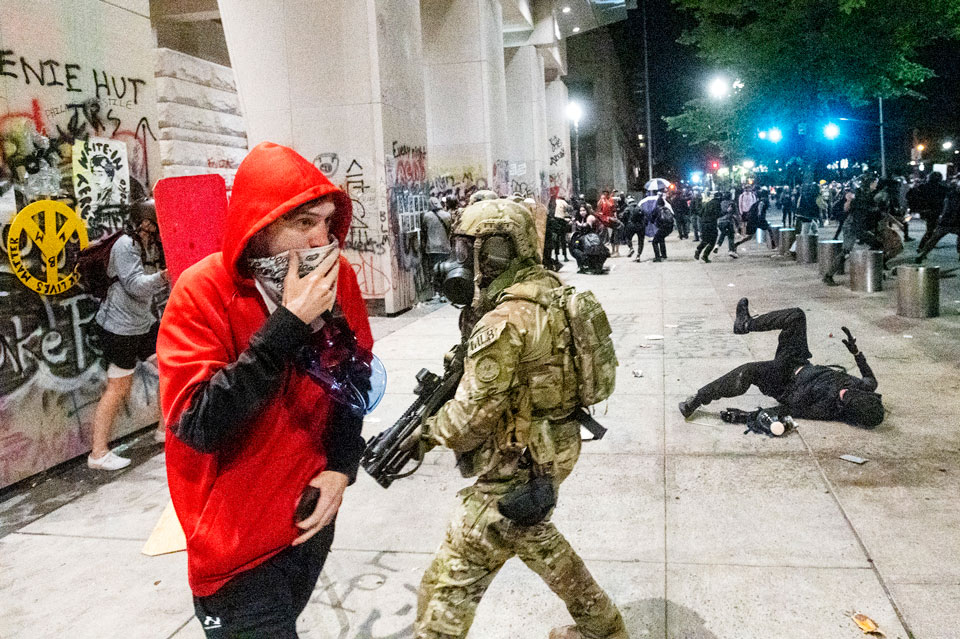 Federal officers disperse Black Lives Matter protesters outside the Mark O. Hatfield United States Courthouse on Wednesday, July 22, 2020, in Portland, Ore. (AP Photo/Noah Berger)In a twist, the judge hearing the case — U.S. District Court Judge Michael Mosman — works out of the Mark O. Hatfield Federal Courthouse, which has been a target for more than 50 nights of protests following the killing of George Floyd. Floyd, a Black man, died after being pinned at the neck by a white Minneapolis police officer, igniting protests against racial injustice nationwide.

The motion for a temporary restraining order asks the judge to immediately command agents from the Department of Homeland Security, the U.S. Customs and Border Patrol, the Federal Protective Service and the U.S. Marshals Service to immediately stop detaining protesters without probable cause, to identify themselves before arresting anyone and to explain why an arrest is taking place.

“There is no question that they have the right to protect federal buildings,” the motion reads. “But these officers have also pursued peaceful, unarmed citizens through city streets and used unlawful intimidation tactics to instill fear of violence and chill the exercise of rights protected by both the Oregon Constitution and the United States Constitution.” 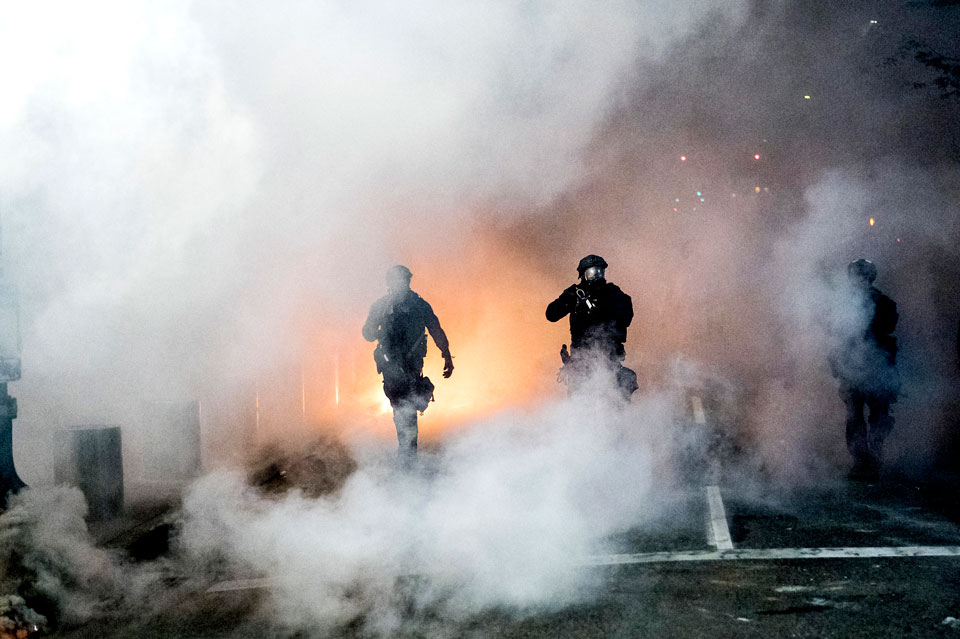 Federal officers use crowd control munitions to disperse Black Lives Matter protesters outside the Mark O. Hatfield United States Courthouse on Tuesday, July 21, 2020, in Portland, Ore. (AP Photo/Noah Berger)During the hearing — held by videoconference because of the coronavirus pandemic — Rosenblum said she was asking the court to “declare it not acceptable for federal officers to use unconstitutional police state-type acts to detain citizens of Oregon without cause.”

There are 114 federal agents in Portland, according to Steve Lippold, another attorney for the state.

David Morrell, an attorney for the U.S. government, called the motion “extraordinary” and told the court it was based solely on “a few threadbare declarations” from witnesses and a Twitter video.

“It’s important to underscore what’s at stake here. The Hatfield courthouse did not damage itself,” he said, calling the protests “dangerous and volatile.”

It wasn't clear when Mosman would rule. 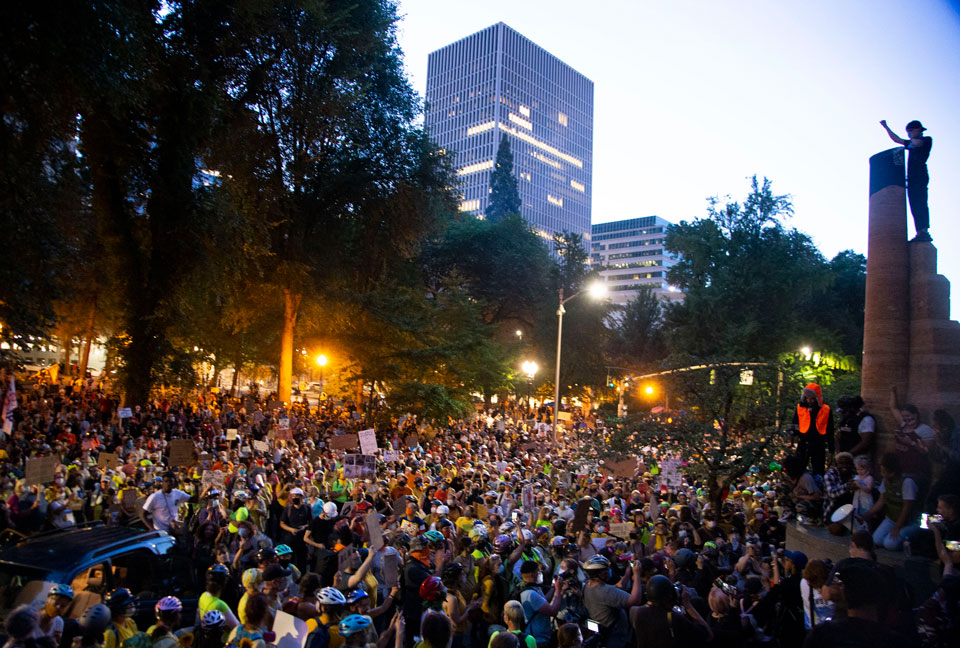 Thousands of people showed up in downtown Portland for day 54 of protests there Monday, July 20, 2020. A potential constitutional crisis is looming over the actions of federal officers at protests in Portland that have been hailed by President Donald Trump but were done without local consent. (Beth Nakamura/The Oregonian via AP)Ahead of Wednesday's hearing, a fence was raised around the federal courthouse, outside of which protesters and federal agents had clashed again overnight, according to the Portland police, who were not present. Protesters repeatedly tried to break into the courthouse and set fires around it, and the federal agents drove them back with tear gas and stun grenades, the police said.

Far from tamping down the unrest in Portland, the presence of federal agents on the streets of the progressive city has recently energized the nightly protests that had begun to devolve into smaller crowds.

In addition to the suit from the state attorney general, the Trump administration also faces another lawsuit, accusing federal agents of violating protesters' 10th Amendment rights by engaging in police activities designated to local and state governments. That legal action was filed by the Western States Center, which helps organize and promote the rights of communities of color and low-income people.

State and local officials have rejected the presence of the agents and did not ask for them.

“It is time for the Trump troops to go home and focus their attention on other activities,” Democratic Gov. Kate Brown said on MSNBC.

Federal authorities, however, said state and local officials had been unwilling to work with them to stop the vandalism and violence against federal officers and the U.S. courthouse in Portland.

“We need to find a peaceful outcome,” acting Department of Homeland Security Secretary Chad Wolf said at a news conference Tuesday in Washington. “At the end of the day, we have to protect the federal property and the law enforcement officers.”

The use of federal agents against the will of local officials also has set up the potential for a constitutional crisis, legal experts say. It could escalate if Trump sends federal agents elsewhere, as he says he plans to do, including to Democratic-led Chicago.

Federal forces were deployed to Portland in early July, and tensions have grown since: A protester was hospitalized this month with critical injuries after a U.S. Marshals Service officer struck him in the head with a round of so-called less-lethal ammunition. Anger flared again over the weekend after video surfaced of a federal agent hitting a U.S. Navy veteran repeatedly with a baton while another agent sprays him in the face with pepper spray.

Crowds had recently numbered fewer than 100 people but swelled to more than 1,000 over the weekend, attracting a broader base in a city that’s increasingly unified and outraged.

Among the protesters this week was Maureen Healy, who joined a march with a family member, as demonstrators sang songs, chanted the names of Black lives lost and held moments of silence.

Just after midnight, she saw a line of authorities wearing camouflage and dark outfits emerge and advance on the crowd. The crowd retreated, and Healy said she heard bangs, saw smoke and was struck by a projectile as she turned away. She felt blood on her temple and went to the hospital with a black eye, cut to her face and a possible concussion.

“This is my home. I was protesting peacefully so why did federal troops shoot me in the head?” asked Healy, 52, who is the chair of the History Department at Lewis & Clark College.

Wolf defended the federal response and said agents have been assaulted with lasers, bats, fireworks, bottles and other weapons. While he said federal agencies have made 43 arrests since July 4, he disputed that they were done by unidentified agents, noting that they have the word “police” on their uniforms.

“These police officers are not storm troopers, they are not Gestapo. That description is offensive,” Wolf said.

Associated Press writers Sara Cline in Portland, Oregon, and Colleen Long and Ben Fox in Washington contributed to this report.