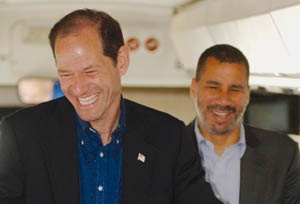 New York Gov. Eliot Spitzer resigned Wednesday. New York Lt. Gov. David Paterson will succeed him as the first African American governor of New York. Here both men are pictured on the campaign trail in May 2006: Spitzer is at left, Paterson, who is legally blind, stands behind him at right.