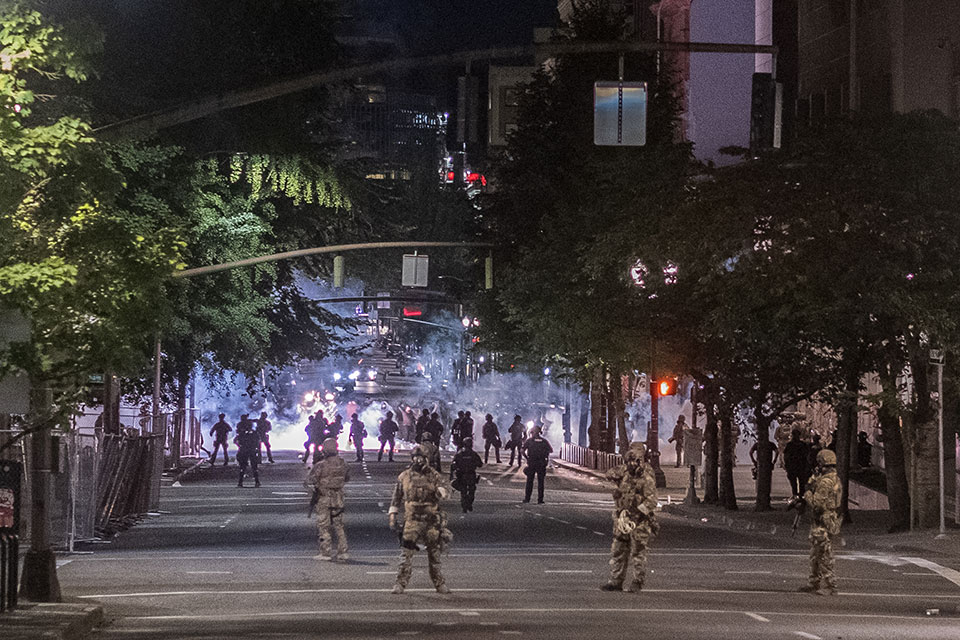 PORTLAND — The American Civil Liberties Union Foundation of Oregon today sued the Department of Homeland Security and U.S. Marshals Service, which have deployed federal agents to Portland, Oregon. These agents, which have been deployed over the widespread objections of local leaders and community members, have been indiscriminately using tear gas, rubber bullets, and acoustic weapons against protesters, journalists, and legal observers. Federal officers also shot a protester in the head Sunday with a rubber bullet fracturing the person’s face and skull.

Today’s lawsuit seeks to block federal law enforcement from dispersing, arresting, threatening to arrest, or using physical force against journalists or legal observers. The lawsuit is one of many the ACLU will be filing against federal authorities in Portland for their unconstitutional attacks on people protesting the police killing of George Floyd.

“This is a fight to save our democracy,” said Kelly Simon, interim legal director with the ACLU of Oregon.

“Under the direction of the Trump administration, federal agents are terrorizing the community, risking lives, and brutally attacking protesters demonstrating against police brutality. This is police escalation on top of police escalation. These federal agents must be stopped and removed from our city. We will continue to bring the full firepower of the ACLU to bear until this lawless policing ends.”

Here's the moment I was #shot by #feds on July 11th. I am in the light, clearly marked as #press, carrying a Nikon d850. Our first #FirstAmendment rights are being trampled on by those who are sworn to protect it. pic.twitter.com/1ZyMH3pjWd

“Cowardly attacks on those who report police misconduct to the world have no place in a free society,” said Matthew Borden, partner at Braun Hagey & Borden LLP.

The filing adds federal agencies to an existing lawsuit the ACLU of Oregon filed last month against local law enforcement. In that lawsuit, a federal judge issued an order blocking local law enforcement from dispersing, arresting, threatening to arrest, or using physical force against journalists or legal observers at protests until October 30. Today’s filing seeks to extend that order to federal law enforcement.

“What is happening in Portland is an unconstitutional nightmare,” said Vera Eidelman, staff attorney with the ACLU’s Speech, Privacy, and Technology Project. “This is not law and order. This is lawlessness. The ACLU will not let the government respond to protests against police brutality with still more brutality. We will continue to hold law enforcement at all levels of government accountable, just as we have nationwide.”

The ACLU has filed multiple lawsuits across the country in response to unconstitutional law enforcement attacks on journalists and protesters, including suing President Trump and other administration officials for the firing of tear gas on protesters outside the White House on June 1.

Today’s lawsuit was filed by the ACLU Foundation of Oregon and Braunhagey & Borden LLP. in the U.S. District Court for the District of Oregon, Portland Division.

The motion for a temporary restraining order is here.

The amended complaint is online here.

An earlier ACLU statement on reports of federal officers grabbing protesters off the streets is here. Full case files are online here.