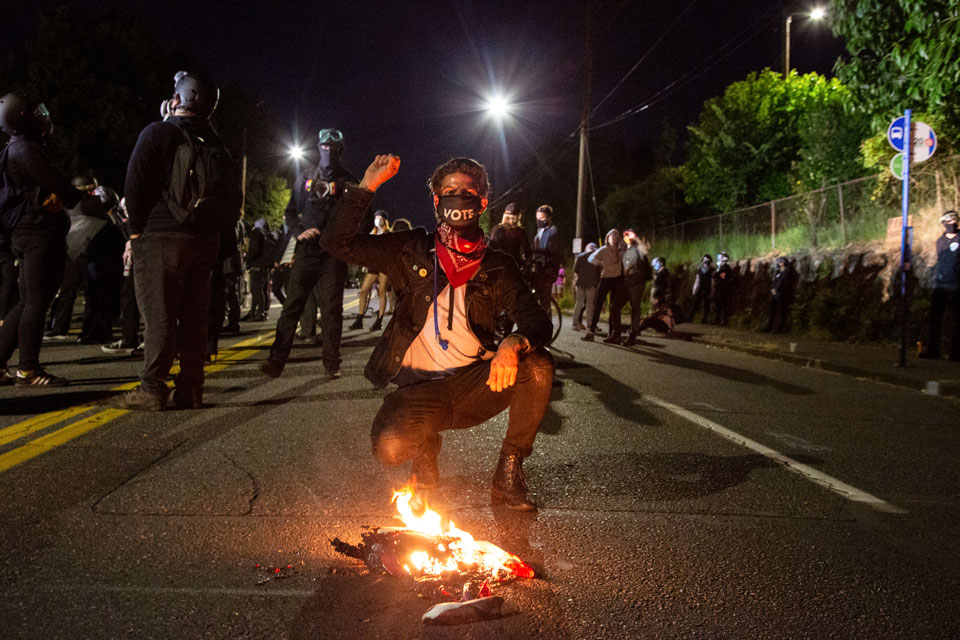 PORTLAND, Ore. (AP) — Federal agents in green camouflage uniforms have been taking into custody people in the streets of Portland, not close to federal property that they were sent to protect, in what the ACLU of Oregon on Friday said “should concern everyone in the United States.”

“Usually when we see people in unmarked cars forcibly grab someone off the street we call it kidnapping.

"The actions of the militarized federal officers are flat-out unconstitutional and will not go unanswered,” said Jann Carson, interim executive director of the American Civil Liberties Union of Oregon. 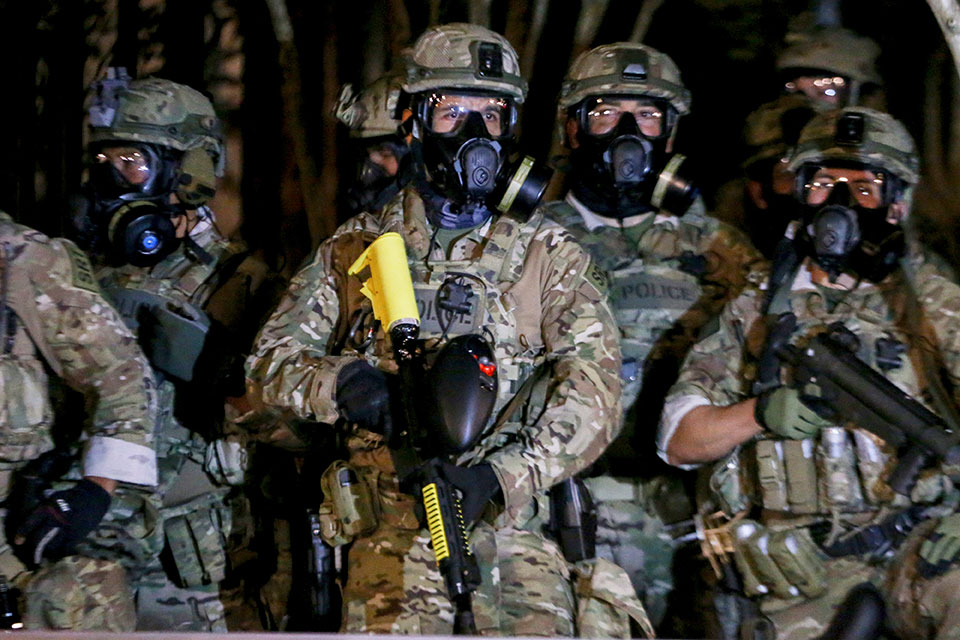 Police stand as protesters gather during a demonstration, Thursday, July 16, 2020 in Portland, Ore. Federal officers deployed tear gas and fired less-lethal rounds into a crowd of protesters late Thursday. The actions came just hours after the head of the Department of Homeland Security called the protesters “violent anarchists.” (Beth Nakamura/The Oregonian via AP)Oregon Gov. Kate Brown said President Donald Trump, who deployed Department of Homeland Security officers to Portland, “is looking for a confrontation in Oregon in the hopes of winning political points in Ohio or Iowa.”

“Now he is deploying federal officers to patrol the streets of Portland in a blatant abuse of power by the federal government,” Brown, a Democrat, said in a statement late Thursday.

Federal officers have charged at least 13 people with crimes related to the protests so far in Portland, Oregon Public Broadcasting reported Thursday. Some have been detained by the federal courthouse, which has been the scene of protests. But others were grabbed blocks away.

One video showed two individuals in helmets and green camouflage with “police” patches grabbing a person on the sidewalk, handcuffing them and taking them into an unmarked vehicle.

“Who are you?” someone asks the pair, who do not respond.

At least some of the federal officers deployed in Portland belong to the Department of Homeland Security.

Authoritarian governments, not democratic republics, send unmarked authorities after protesters. These Trump/Barr tactics designed to eliminate any accountability are absolutely unacceptable in America, and must end. pic.twitter.com/PE4YfZ9Vqd

The Council on American-Islamic Relations Oregon chapter said in a statement: “We are now seeing escalating tactics with protesters being unlawfully detained by unknown Federal law enforcement entities."

On Thursday night, federal officers deployed tear gas and fired less-lethal rounds into a crowd of protesters in Portland, hours after the the head of the Department of Homeland Security visited the city and called the demonstrators, who are protesting racism and police brutality, “violent anarchists.”

Video showed many protesters leaving the area near the federal courthouse late Thursday as smoke filled the air.

During a visit to Portland earlier Thursday, Homeland Security Acting Secretary Chad Wolf said state and city authorities are to blame for not putting an end to the protests, angering local officials.

Mayor Ted Wheeler and other local officials have said they didn’t ask for help from federal law enforcement and have asked them to leave.

A few hundred people had gathered near the federal courthouse Thursday night, news outlets reported. Police told protesters to leave after announcing they heard some chanting about burning down the building, according to The Oregonian.

A short time later, federal officers fired rounds and deployed tear gas to break up the crowd. Some protesters remained in the area early Friday and were detained, but it was unclear whether any arrests were made, the newspaper reported.

Homeland Security Acting Deputy Secretary Ken Cuccinelli said Friday morning on “Fox & Friends” that the federal government has a responsibility to protect buildings such as the courthouse.

“What we’ve seen around the country is where responsible policing is advanced, violence recedes," Cuccinelli said. "And Portland hasn’t gotten that memo. Nor have a lot of other cities. And the president is determined to do what we can, within our jurisdiction, to help restore peace to these beleaguered cities.”

The Department of Homeland Security had no immediate comment when reached by The Associated Press on Friday.

Tensions have escalated in the past two weeks, particularly after an officer with the U.S. Marshals Service fired a less-lethal round at a protester’s head on July 11, critically injuring him.

The protests in Oregon’s largest city following the police killing of George Floyd in Minneapolis have often devolved into violent clashes between smaller groups and the police. The unrest has caused deep divisions in a city that prides itself on its activism and progressive reputation.