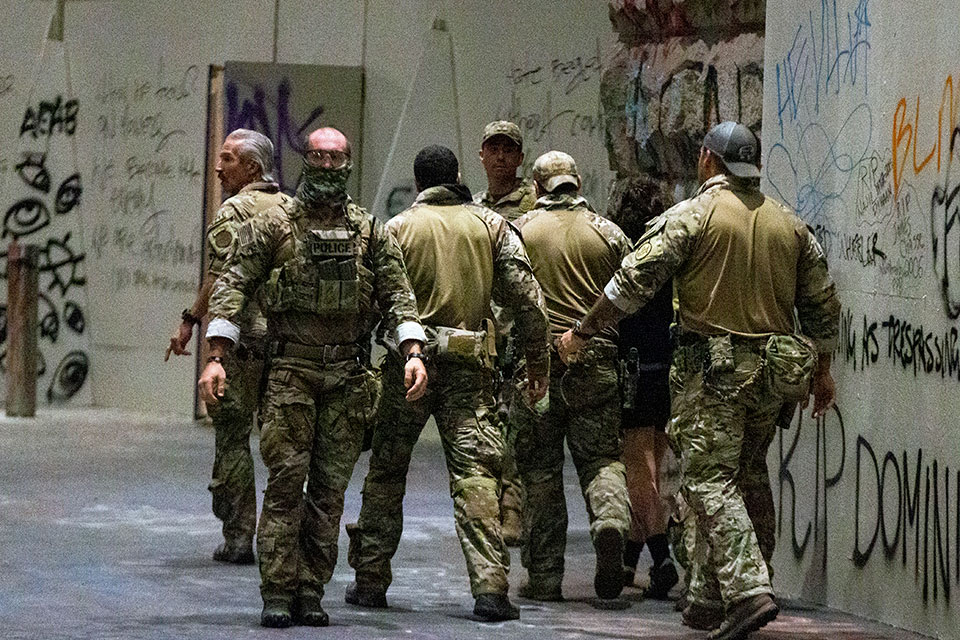 PORTLAND, Ore. (AP) — The U.S. Marshals Service is investigating after a protester was hospitalized in critical condition over the weekend after being hit in the head by a less-lethal round fired by a federal law enforcement officer, authorities said Monday.

The investigation into the shooting will be reviewed by the U.S. Department of Justice's Office of the Inspector General, U.S. Attorney for Oregon Billy J. Williams said. He said his office would have no further comment.

“I want to make it very clear so that there’s no confusion,” Portland's Democratic mayor, Ted Wheeler, said on Monday.

“The serious injuries sustained by Donavan LaBella at the hands of a federal officer were unacceptable.”

Bystander videos show LaBella, 26, collapsing to the ground unconscious and bleeding profusely from the head after a federal officer outside the Mark O. Hatfield Federal Courthouse fired a less-lethal round at him. He was standing with both arms in the air holding a large speaker across the street from the courthouse when he was hit.

Video shows moments where a Portland protester was hit in the head with a projectile, which sent him to the hospital where he is now in serious condition. https://t.co/mxmStr8eTH pic.twitter.com/yuE7AMJ7Sx

LaBella's mother, Desiree LaBella, told Oregon Public Broadcasting that her son suffered facial and skull fractures. He came out of surgery early Sunday morning and was responding to doctors.

“He was awake enough to give the OK to talk to me,” she said. “He’s had some facial reconstruction surgery. They’re just watching him right now.”

The incident was widely condemned in Portland, which has seen violent protests every night following the death in May of George Floyd in Minneapolis. Recent protests have focused almost entirely on federal property, and particularly the courthouse.

The Department of Homeland Security has deployed officers from more than a half-dozen federal law enforcement agencies and departments to quell the unrest in Portland.

Federal officers used tear gas over the weekend against protesters. The Portland Police Bureau is under a temporary federal court order that bans them from using tear gas unless they declare a riot — something the local police did multiple times before federal officers showed up.

President Donald Trump said Monday that “Portland was totally out of control” and that federal officers “very much quelled it.”

“They went in and I guess they have many people right now in jail. We very much quelled it. If it starts again, we’ll quell it again, very easily. It’s not hard to do if you know what you're doing," he said at a roundtable on law enforcement.

“We should be sending a very strong community message, saying, ‘You’re in the wrong place. We don’t need you.

"It was bad enough before you got here, and all you’re doing is making it worse,’" she said in a phone interview Monday with the AP.

“There are people that appear to be in military uniform and ... they have no identification on their uniforms at all.”

Wheeler said he has no problem with federal officers protecting their facilities.

“What I have a problem with is them leaving the facilities and going out onto the streets of this community and then escalating an already tense situation as they did the other night,” he said.

“I would consider telling them to leave — and I have no authority to do so."

Last week, Deputy Police Chief Chris Davis said an “agitator corps” of violent protesters were responsible for vandalism and chaos in the city. Davis made a distinction between Black Lives Matter protesters, whom he said were nonviolent, and a smaller group of people he repeatedly called “agitators.”