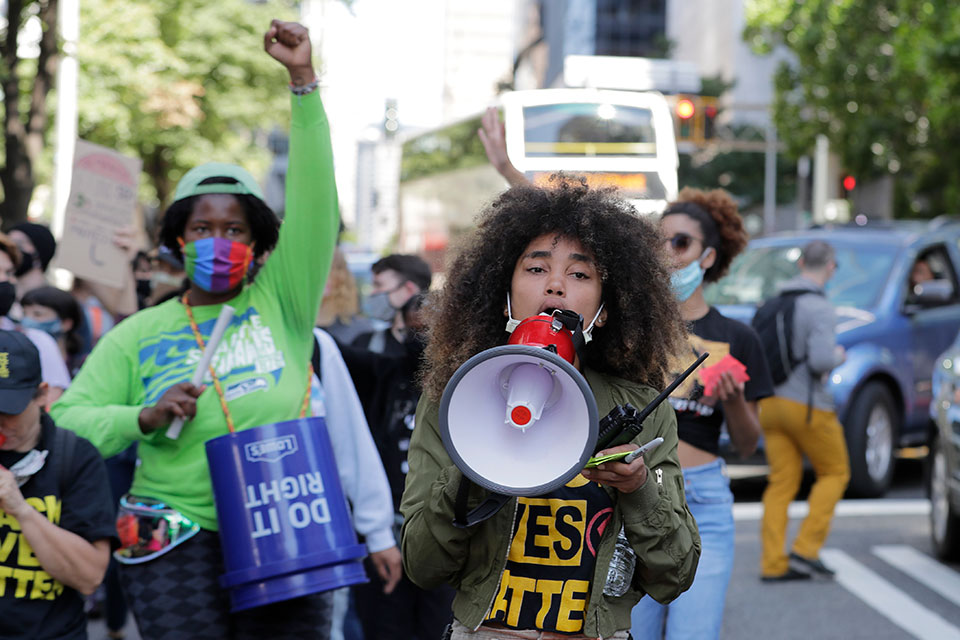 SEATTLE (AP) — Seattle Mayor Jenny Durkan on Monday blasted the City Council's plan to cut the police department's budget by 50% and instead proposed transferring a list of functions like the 911 call center and parking enforcement out of the agency's budget.

“We need to invest in community-based solutions that address underlying root issues,” Durkan said at a news conference.

“The community has made clear, they want us to transform the Seattle Police Department and to reinvest in programs that provide this kind of community safety.”

Monday's announcement came after weeks of street protests sparked by the police killing of George Floyd in Minneapolis. Calls to defund the Seattle police grew louder after protesters were hit with pepper spray and flash bombs during demonstrations.

The Office of Police Accountability received more than 17,000 complaints against officers related to protests. Most focus on 17 incidents that range from excessive force, flashbang injuries and aggressive crowd-handling tactics.

Councilmember Kshama Sawant had said on Twitter that in July and August the council will vote on the police budget for the rest of 2020 and they plan to cut about 50%, or about $85 million.

On Monday, Sawant said: “In the autumn budget vote, Seattle City Council will vote on the budget for next year. People’s Budget will then bring the legislation to defund all of next year’s police budget by at least half, around $200 million, going by their budget for this year.”

Seven of the council's nine members support that plan, Durkan said, but they've failed to speak with the chief or conduct any thorough research to understand the impacts of that kind of a drastic cut. Seattle Police Chief Carmen Best said eliminating half the department would risk public safety.

“I will not sacrifice officers of color for political points.”

City Councilmember and Public Safety Chair Lisa Herbold said via Twitter on Monday that the council is working through the police budget and is in the very beginning stages of developing proposals. Herbold also said Best wouldn't have to fire the newest people, many of whom are people of color, in a layoff scenario because Best can request permission to do them out of order.

Durkan wants to reduce the 2021 budget by about $76 million by transferring a number of non-officer functions out of the department. The department's budget for the current year is more than $400 million. Included in the reorganization would be the 911 call center, parking enforcement, the Office of Emergency Management and Office of Police Accountability. 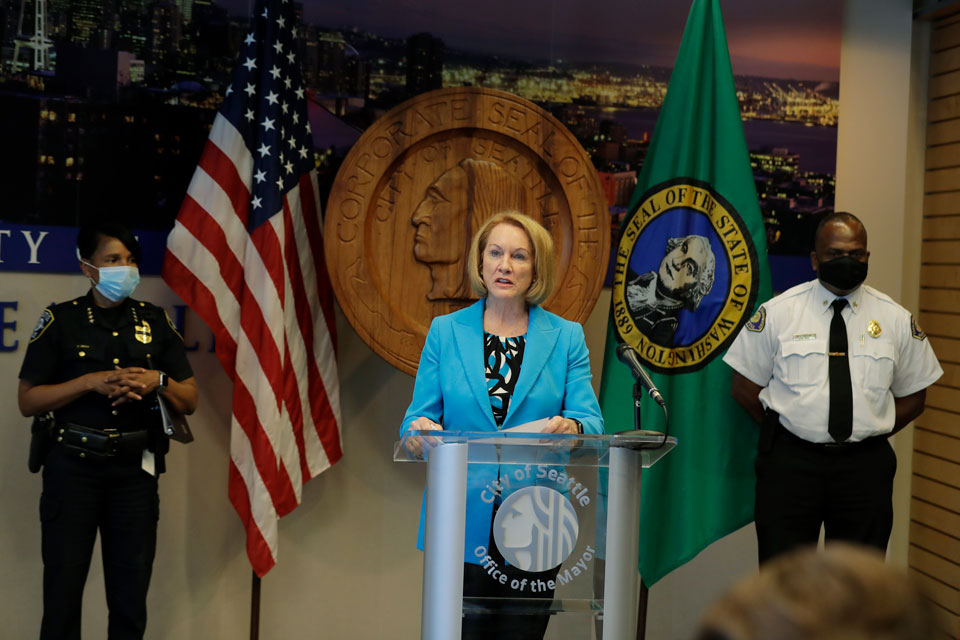 Seattle Mayor Jenny Durkan, center, speaks Monday, July 13, 2020, during a news conference at City Hall in Seattle as Police Chief Carmen Best, left, and Fire Chief Harold Scoggins , right, look on. Durkan and Best were critical of a plan backed by several city council members that seeks to cut the police department's budget by 50 percent. (AP Photo/Ted S. Warren)An officer is not always the best person to respond to every call, Durkan said. Some emergencies should instead be handled by a social worker, nurse, firefighter or family counselor.

About $20 million will be cut by not expanding the force and reducing overtime, Durkan said.

Moving the 911 call center will reduce the police budget by $34.2 million, she said. Transferring the parking enforcement division will save $13.7 million and moving the emergency management department would cut $3.3 million.

Durkan has been sharply criticized for the way she has handled the protests and police response. A campaign to unseat Durkan secured a boost last week when a judge approved a petition for an election to recall the mayor.

Durkan has repeatedly said that she has sought the help of the community while making decisions about police reform, but members of the Community Police Commission said they have not been consulted. The group was formed as part of the consent decree agreement with the federal court.

“A staff member from the mayor’s office emailed us at 9:22 a.m. telling us that the mayor would be announcing their plan,” commission spokesperson Jesse Franz said Monday.

Others have supported shifting funds to help people in crisis.

Councilmember Andrew Lewis has proposed legislation to use some of the policing budget for a new mental health and substance abuse program. Unarmed medical personnel and crisis workers would respond to a mental health crisis instead of an officer.

“By the most conservative estimates one in every four people fatally shot by a police officer has a mental illness,” Lewis said on Twitter. “This has to stop.”