The bold primary colors and geometric shapes in Jacob Lawrence's paintings tell the stories of the millions of African Americans who migrated north to seek new opportunities in urban centers like New York, Chicago, Philadelphia, and Baltimore. The multilayered graffitti-style paintings and collages that Jean-Michel Basquiat created were inspired by Black musicians, such as Charlie Parker and Jimi Hendrix. Faith Ringgold's paintings depict the African American people she saw around her every day and commemorate events such as the birth of the Black Power movement.
Three very different African American artists, with three very different styles. Yet they all were inspired by the lives and experiences of Black people in America. This month high school student artists are invited to submit work to the "Young Gifted and Black" 2008 African American Visual Arts Scholarship competition. The theme of this year's competition is "The Black West." 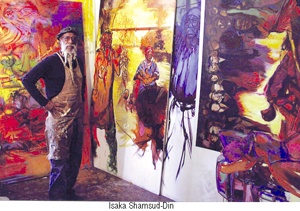 "At one time artists were the only chroniclers," said Portland painter and muralist Isaka Sahmsud Din. "…history has been the foundation for some of the greatest work that has ever been done."
Sponsored by the scholarship committee, based at Portland State University; Jefferson High School; the nonprofit Paint a Difference; and the Rose Festival, the competition seeks to encourage young African American artists. It offers cash prizes of $500, $250 and $100 to the winners. The competition is open to all high school students of African origin.
Students can request scholarship entry forms or find out more from 503-916-5180 ext 1391, by emailing Paulette Watanabe at [email protected] or by visiting the scholarship Web site at www.aavas.com. The deadline for the competition is April 1.
All entries will be displayed on the park blocks during the Rose Festival and may also be exhibited in city hall, says Shamsud-Din, who helped organize the competition.
"There are a lot of talented Black youth out there who aren't even trying to be visual artists," Shamsud-Din said. "One reason is that they don't have the context. Artists need to see themselves in what's around them."
The recently retired Portland State University art professor, whose murals can be seen at several sites in town including the Oregon Convention Center, and on Northeast Martin Luther King Jr. Blvd. at Shaver, said African Americans face unique barriers to pursuing art. An artists mind is filled with images – and for African Americans, especially in the West, those historical images have either been missing or distorted.
"Most people can go directly to their cultures, directly to their histories," Shamsud-Din said. "But how do you become a painter if you're an African American and you have no history that you are aware of – because you don't get it from any standard curriculum.
"I believe this is a post-slavery trauma – it is a trauma. What we need to know is that we do have a history that is inspiring and we should be proud of it."
Many historical figures of African Americans depict slaves on their knees, showing gratitude to President Lincoln or pleading for mercy, he points out. Yet the pioneers, the achievers, the teachers, inventors and courageous fighters too often are missing. One African American who often does get a mention is York, the athletic and courageous explorer who accompanied Lewis and Clark on their expedition to the Pacific Northwest. But, because he was a "manservant" and in fact enslaved, his contribution has only recently been treated fairly.
"He was so much more vital to that expedition than is generally recognized," Shamsud-Din said. "His heroic temperament, his personality and his ability to lift spirits, for example. And he learned languages very quickly."
To create the mural now mounted in the Oregon Convention Center, that shows African Americans in the Northwest, Shamsud-Din had to do some research. His mural depicts York as the central figure surrounded by figures such as Bill Pickett, who invented the rodeo sport of bulldogging; George Washington who founded the town of Centralia in Washington; explorer and mountain rescue pioneer Moses Harris; and Beatrice Kanady, an early NAACP chair and the first Black lawyer to be admitted to the Oregon Bar.
Shamsud-Din hopes that students will be inspired by the competition to create their own art about the first African Americans to come west.
To help young artists find inspiration, books and articles about African Americans in the West are listed on the scholarship program's Web site, www.aavas.com. Other online resources include Multnomah County Library, where you can reserve a book about the Black West and the Northwest-based Web sites www.Blackpast.org and www.endoftheoregontrail.org/blakbios.html