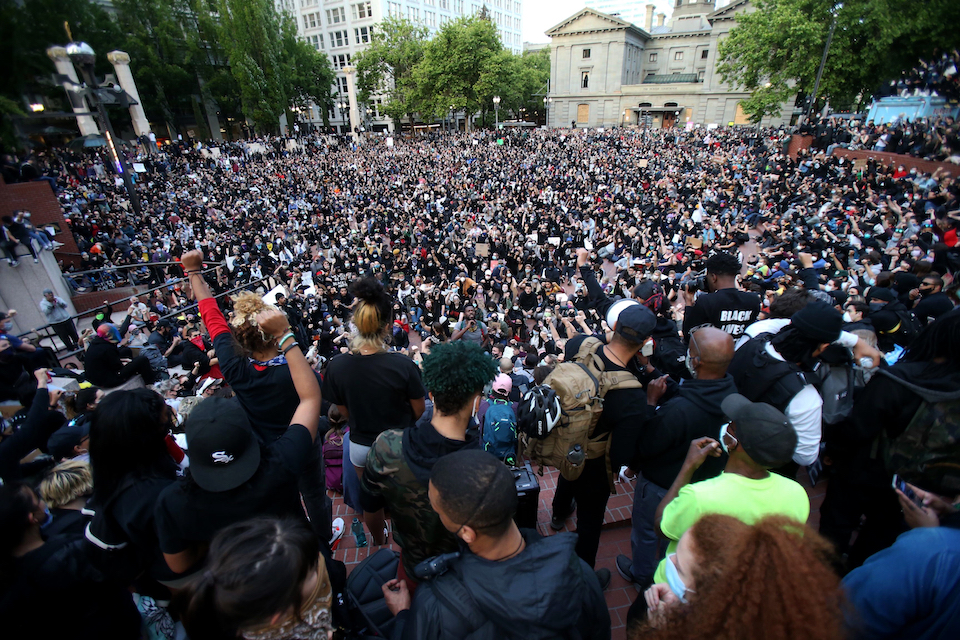 PORTLAND, Ore. (AP) — Protesters in this liberal, predominantly white city have taken to the streets peacefully every day for more than five weeks to decry police brutality. But violence by smaller groups is dividing the movement and drawing complaints that some white demonstrators are co-opting the moment.

As the Portland protests enter a second month, they have shifted on several nights from the city’s downtown core to a historically Black neighborhood in North Portland that’s already buckling under the effects of white gentrification and has the most to gain — or lose — from the outrage in the streets.

Late last week, some protesters barricaded the doors to a police precinct a half-block from Martin Luther King Jr. Boulevard and set fire to the building, which also houses Black-owned businesses, including an Ethiopian restaurant and a barber’s school.

Two nights later, a potluck at a park in the heart of the Black community morphed into another violent clash with police, who unleashed tear gas to quell the crowd of several hundred people.

On Friday, a Portland man was arrested for his role in an overnight attack on the Hatfield Federal Courthouse, U.S. Attorney Billy J. Williams said.

The change has angered and frustrated some in the Black community, who say a “white fringe element” is distracting from their message with senseless destruction in a city where nearly three-quarters of residents are white and less than 6 percent are Black.

“This is NOT the Black Lives Matter movement. This is chaos,” Kali Ladd, executive director of KairosPDX, wrote in a Facebook post.

“These white actors are enacting dominance in a different form under the guise of equity ... White supremacy has many forms.”

Demonstrations elsewhere in the city have also grown increasingly violent. Early Friday, someone broke the windows of a federal courthouse and threw fireworks that started a fire inside the building.

One prominent Black leader wrote to Mayor Ted Wheeler and said some clashes had unfolded three blocks from his house. He said the problem was with “elements” that were “99 percent white” and did not represent the Black Lives Matter movement.

“It has nothing to do with helping Black people. These hoodlums are needlessly scaring neighbors and their children,” said Ron Herndon, who has fought for racial justice in Portland for four decades and led a school boycott in 1979 after the city closed predominantly Black schools. “At some point, enough is enough.”

Newly appointed Police Chief Chuck Lovell, who is Black, said the violence in North Portland was “offensive and hurtful” and has cost the city at least $6.2 million in overtime for its officers.

“People in that neighborhood were upset. That’s not something they’re going to tolerate ... and they came out and were very vocal,” Lovell said.

“I think people sometimes look at the protest movement as one homogeneous group — and there’s definitely a segment here that is very violent.”

The tension over the protests comes amid increasing conflict within the movement itself.

Rose City Justice, a coalition that for weeks galvanized thousands of people for peaceful marches and rallies every night, announced last week it will no longer do so after it was criticized, among other things, for sitting down with the police commissioner and mayor to discuss police reform.

The Rose City Justice marches and rallies attracted a diverse crowd of 10,000 people a night at one point.

High school students marched arm-in-arm with the Portland Trail Blazers’ Damian Lillard across the Burnside Bridge, and people gathered along the Willamette River to listen to hours of music and speeches.

Aerial photos of the crowds, which filled the massive bridge from end to end, made national headlines.

“The purpose of making noise is to have a seat at the table, to be heard,” the coalition said in a statement announcing its decision to stop marching nightly. “As with every movement, we realize that there are people who actively work to discredit momentum and change.”

Now, as clashes with police have become more violent in the business district and moved toward the residential neighborhoods of North Portland, Black residents are watching in dismay.

Many are concerned that those watching police precincts burn and businesses get vandalized will wrongly assume Black people are doing the damage.

Jerome Polk has operated his business, J.P.’s Custom Framing, for 26 years from a building he shares with the North Precinct police offices that were set ablaze. As he carried supplies into his business on a recent day, char marks, graffiti and police tape were still visible outside the building, and half of Polk’s own windows had been boarded up as a precaution.

“I don’t know the motivation of why people do what they do,” he said. “I know when the damage is done, they blame that on what the movement is supposed to be. And that’s unfortunate and unfair.”

Message of racial justice at risk of being lost

A few blocks away, Carl Baskin sat next to his drive-up car wash station and worried that the message of racial justice was being taken away from the Black community by “young white children.”

“This is where they’re losing the narrative. In the midst of all this other stuff, they’re not really showing anyone sitting down with the police, actually talking and getting some of this stuff made into laws,” Baskin said. “That’s the stuff we should be talking about.”

The sting is made even deeper by the fact that the North Portland neighborhood has, over the years, seen an exodus of Black families and businesses as white people have moved in.

On a recent day, just a few blocks from boarded-up buildings and anti-police graffiti, white families with strollers walked past food carts selling sushi burritos as fliers advertising micro-greens fluttered in the wind.

“Get to know us and get to know the pain that we feel with gentrification in this neighborhood,” said Elaine Loving, who has lived in her family’s North Portland home for 59 years.

“Now it’s mostly white folks, and they don’t even speak to us half the time — and that hurts.”