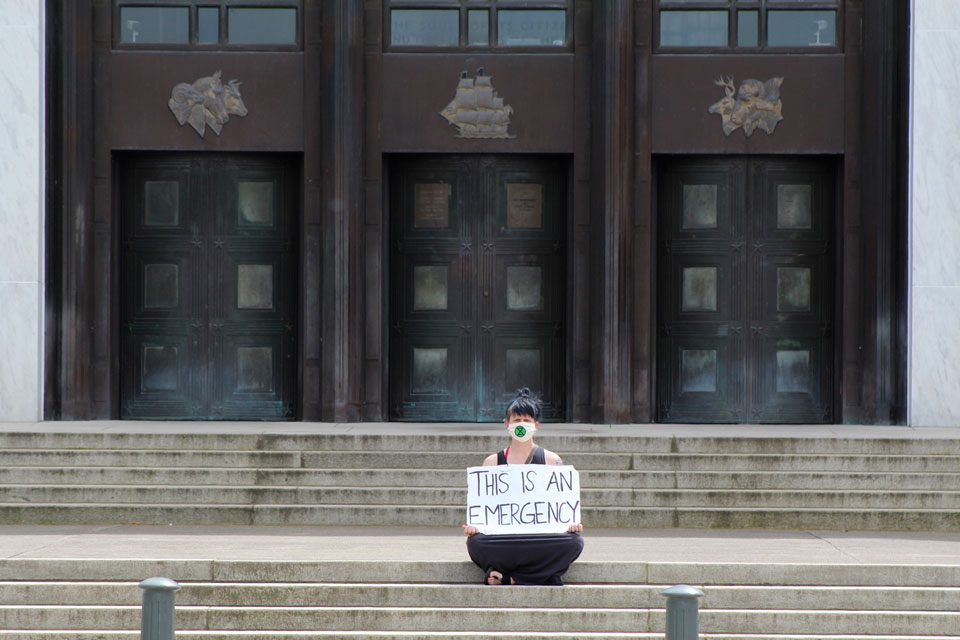 SALEM, Ore. (AP) — Oregon lawmakers will be voting on bills, including ones banning police from using chokeholds and mandating rent protections during the coronavirus emergency, during a special session of the Legislature that begins Wednesday.

They'll be doing so under restricted circumstances in hopes of preventing spread of the coronavirus. The session was to convene, for an undetermined number of days, less than four months after the regular 2020 session ended acrimoniously.

Back then, Republican lawmakers, who are the minority in both the House and Senate, staged a boycott to block a bill aimed at reducing Oregon’s greenhouse gas emissions, preventing a quorum and leaving many other bills to wither and die.

This time, lawmakers are meeting mainly to consider issues — the pandemic and police brutality — that have moved to the forefront, in both Oregon and the rest of the nation, since the regular session imploded on March 5.

One draft measure says law enforcement officers “may not use force that limits ability of person to breathe, including but not limited to choke holds.”

Other proposals would create a statewide online database of discipline records for officers, prevent an arbitrator from reducing punishments for officers, ban the use of tear gas on protesters and allow the state attorney general to investigate and prosecute when officers kill or seriously injure a person.

Some pushback is expected from law enforcement groups.

"My hope is that decisions will be made based upon facts, evidence and data, not on emotions, politics or perception,” Jim Ferraris, president of the Oregon Association of Chiefs of Police, said Tuesday. Ferraris, who also is the police chief of Woodburn, Oregon, made his comments to a legislative committee that met remotely to prepare for the special session.

Sen. Lew Frederick, D-Portland, who is Black, said he thinks there will be changes in Oregon and the rest of the nation after the death of George Floyd.

“I can’t say that they’re going to be all of the changes that I might want to see, but I think we’re going to see some changes,” Frederick said in a recent phone interview.

But Frederick also said people need to start talking about the role of police.

“Is the role for police to be as intimidating as possible?

Another measure prohibits a lender from treating a borrower’s failure to make loan payment as a declaration of default and prohibits other foreclosure procedures during the emergency coronavirus period.

Special provisions are being made to protect lawmakers and their staffs during the session in the Oregon State Capitol in Salem. Lawmakers feeling sick or with a temperature, or who live with someone who was recently ill, are being told to stay home.

“Please encourage your staff to work remotely and discourage them from coming to the Capitol,” guidelines say. “The fewer people in the Capitol the safer we all are.”

The scene will be completely different from past gatherings in the 82-year-old marble-covered capitol building. Instead of lobbyists, lawmakers and visitors wandering the halls or huddled in groups, the building will be closed to the public, with access controlled by badges or special permission from legislative leadership.

Dining rooms will be closed, drinking fountains turned off and bathrooms restricted to single occupancy. Facemasks are required. Lawmakers can watch proceedings from their offices on video.

Senate President Peter Courtney said the joint interim committee for the special session, which met virtually on Tuesday, will be together in person Wednesday to process legislation.

“We will have to move into some kind of personal contact,” Courtney told committee members.