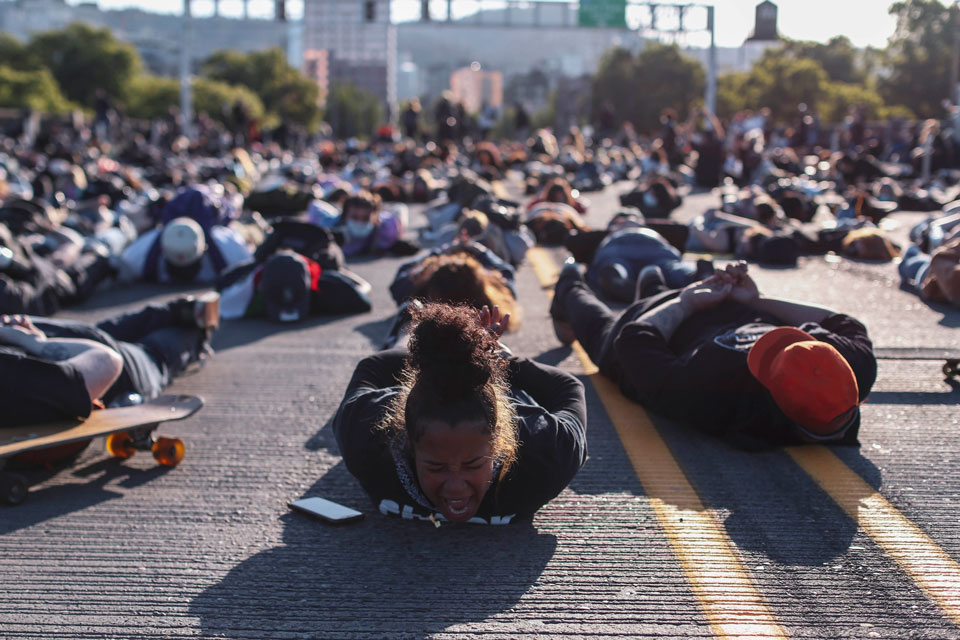 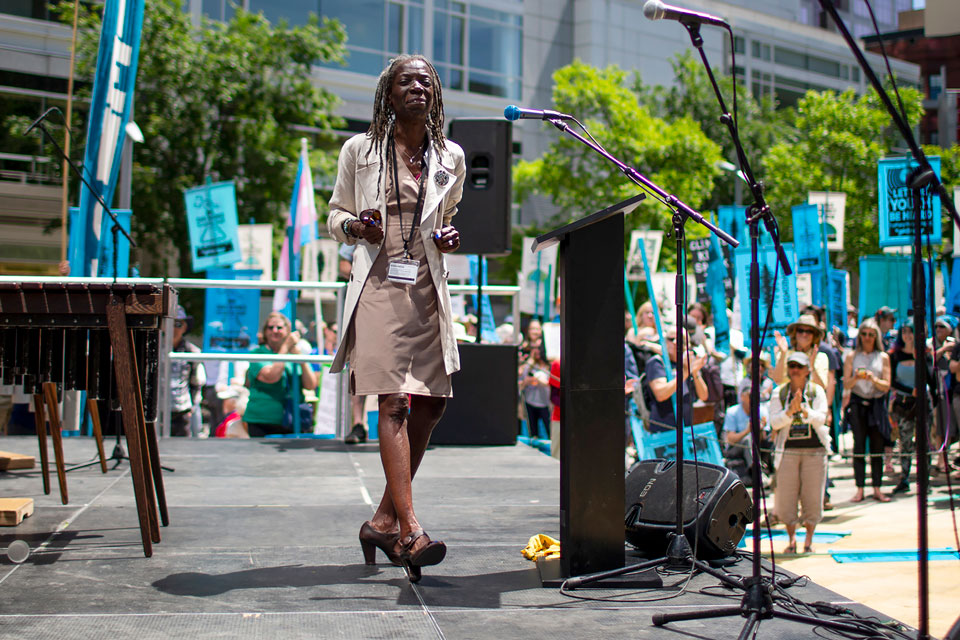 In this June 4, 2019, file photo, Portland Commissioner Jo Ann Hardesty spoke as several hundred people gathered in Director Park in Portland, Ore., at a rally in support of a climate change lawsuit. City commissioners in Portland voted Wednesday, June 17, 2020 to cut nearly $16 million from the Portland Police Bureau's budget in response to concerns about police brutality and racial injustice. The cuts are part of a city budget approved by the commissioners by a 3-1 vote in a contentious meeting. (Dave Killen/The Oregonian via AP, File)Wheeler’s Action Plan to Increase Police Accountability and Reinvest in Black and Brown Communities includes the dissolution of PPB's Transit Division, its Gun Violence Reduction Team and its school resource officer program, and initially suggested redirecting $7 million from the PPB’s $244 million budget to unspecified programs benefiting communities of color. On Wednesday, the Portland City Council voted 3-1 to cut almost $16 million from the police budget, with Commissioner Chloe Eudaly arguing the cuts weren’t deep enough and voting no. The amount falls far short of the $50 million cut that groups like Unite Oregon and the Portland African American Leadership Forum have demanded.

The Portland Committee on Community-Engaged Policing, a court-ordered advisory board that recently voted for partial defunding of the PPB, voiced similar concerns for what members viewed as the plan’s limited scope.

"The $7 million dollars Mayor Wheeler has proposed cutting from PPB  represents just 3% of their budget,” Elliott Young of the PCCEP told The Skanner, clarifying that he was expressing his personal views.

“PCCEP's recommendation to 'defund the police and refund the community' is a call for a substantive shift in resources.

"While I applaud the elimination of the GVRT, transit officers and SROs, the (proposed) cut represents incremental change in a moment when we need transformational change."

“We have to understand that what we’re talking about is decades and decades of billions and billions of dollars being poured into the system of policing, at the expense of community investments,” Mohamed Shehk, National Media and Communications Director for Critical Resistance, told The Skanner.

“The proposed budget for Portland police outpaces the next largest expenditure by over $100 million.”

Locally and nationwide, many activists have called not for reform, but for a complete disbanding of the police -- an idea that is gaining traction.

“I think it’s important to just keep reframing conversations about reforms into a more abolitionist view, so that we don’t get stuck in the cycle that we’ve seen over and over again for the past decades -- that reform doesn’t actually work,” Olivia Hasencamp of Care Not Cops told The Skanner. “It’s not actually effective in making any real change, because the police are only accountable to upholding power dynamics through violence.”

In an open letter to the city, county and Metro, Care Not Cops and Critical Resistance joined 19 other organizations in calling for a moratorium on arrests and "quality of life policing activity" during the pandemic. Such organizations are increasingly pushing the public to have more political imagination.

“We don’t actually have to look very far to see what a community without policing looks like,” Shehk said.

“You just have to look to Beverly Hills or any elite, affluent, primarily White neighborhood in this country, and you’ll see that the police don’t actually have much of a presence there. The reason for that is because in those communities, they have sufficient and meaningful investments in things like education, housing, health care, social services. People’s needs are met. It’s where we have drastic social, economic and racial inequities that police are then used as a solution to those problems, when in reality they end up reproducing the problems themselves.”

Shehk added that the government’s botched response to the COVID-19 pandemic had added an urgency to what has been an ongoing movement.

“The prioritization of funding for policing and other systems of state violence, which led to the killing of George Floyd, is the same prioritization that has left our healthcare system completely underfunded and under-equipped to respond to covid-19,” he said. “It’s a moment where we’re seeing that communities do not have access to proper health care, while the system of policing is extremely well funded.”

Others criticized the mayor’s plan as rushed and vague.

“Wheeler came up with this literally overnight. But I would also note that some of the things in here are not clear that they’re actually reforms: ban chokeholds. According to the current chief of police, chokeholds have been banned for a very long time, and it concerns me that the mayor wouldn’t know that.” 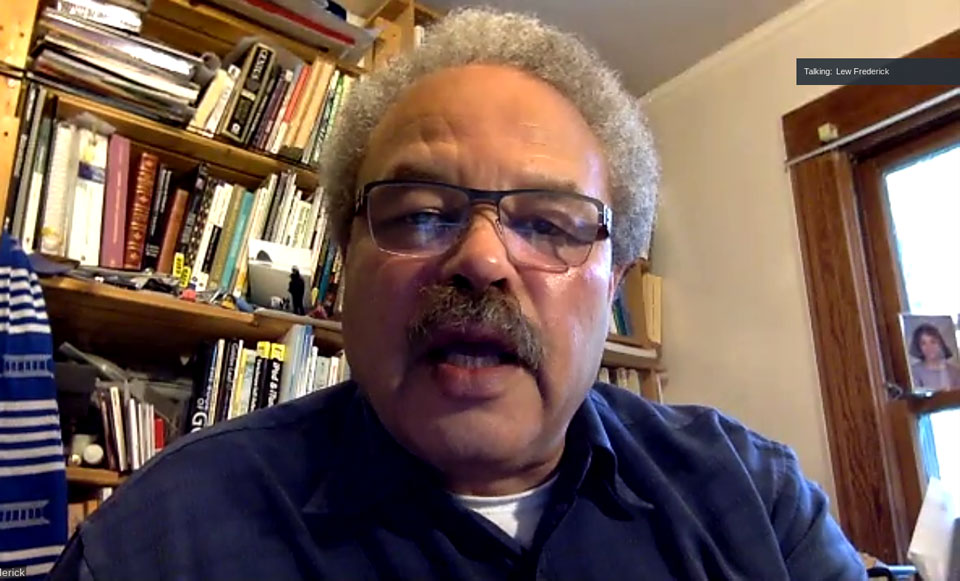 Oregon State Senator Lew Frederick speaks on the Zoom callSen. Lew Frederick (D-Portland), also on the call, said that during the special session at the end of this month, a new legislative package would be introduced at the state level to address urgent concerns about policing.

Candace Avalos, acting chair of the Citizen Review Committee, responded to the mayor’s assertion that current police oversight systems lack “teeth.” Avalos agreed that the CRC didn’t, but added that it does serve as an appeals board and policy advisory committee.

“I think the (Police Review Board) could benefit from a merge with the CRC,” Avalos said.

“Instead of having an appeals board of citizens, we could just have more citizens on the PRB, because right now police officers outweigh citizens in those decisions.”

While the mayor and City Council scramble to respond to increasing calls for systemic overhauls, advocates say the changes have been a long time coming.

“This moment is really a reflection of years and years of organizations working on and demanding the abolition of policing and building relationships and practices, so that when the protests erupted in Minneapolis, there was a whole history of work and organizing and relationships and thought that had been developed that communities can point to when saying, ‘We want to defund and abolish the police,’” Shehk said.