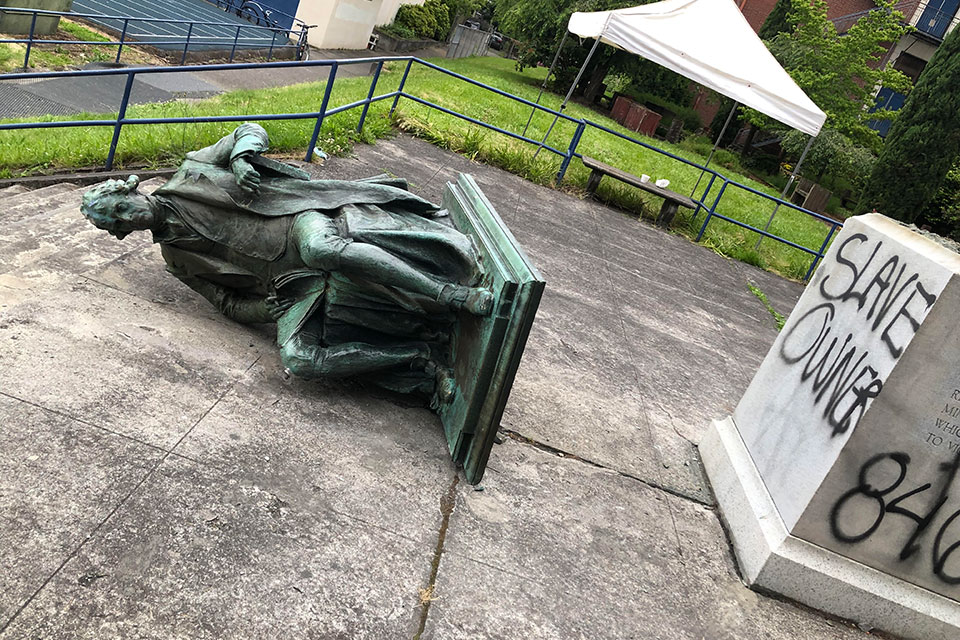 When Clifford Walker got a call Sunday night that he should walk over to Jefferson High School, the 77-year-old alum didn’t realize he’d be witnessing an important moment in local history: the toppling of the Thomas Jefferson statue that has had a problematic presence on campus for more than a century.

“Graphically, if you were to make a map of the Humboldt neighborhood, that statue is almost dead center,” Walker told The Skanner. “I’m proud of the community. I really am. They’ve had a deep discussion, and an opportunity to learn history together, and made an action resulting from the research.

"They think there could be a better role model at the front door of the school than a racist and a slave trader.” 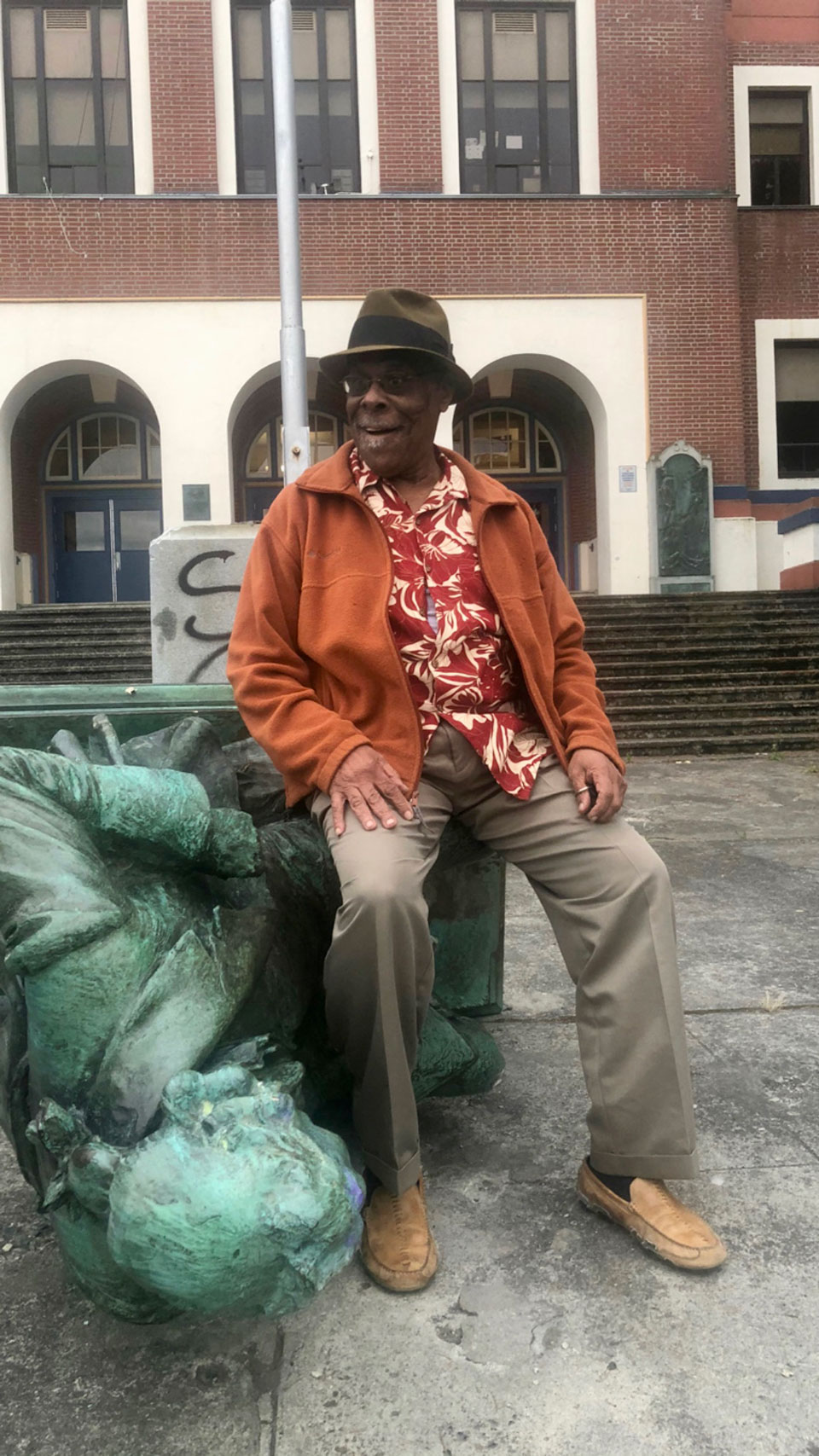 Clifford Walker, historian for the Humboldt Neighborhood Association, sits on the toppled Thomas Jefferson statue in front of Jefferson High School. "It was an honor to be invited to sit on the statue," the Jefferson alum told The Skanner. (photo by by Andre Lightsey-Walker)Walker, historian for the Humboldt Neighborhood Association, has long campaigned for renaming his alma mater -- and he isn’t alone. The Skanner's 2018 readers poll showed some support for a rebranding of what is now called the Jefferson High School Middle College for Advanced Studies. Being a monument to the nation’s third president is an uneasy fit for the only Portland high school where the majority of students are Black.

“Anything that has racist connotation to it needs to be stripped from the educational institutions,” fellow Jefferson alum Richard Hunter told The Skanner. “I would’ve hoped we could’ve had conversations, and that the school would’ve taken it down instead.”

Hunter runs a Facebook group for Jefferson High alumni and said that in general, most members are happy to see the statue gone.

Hunter added, “A lot of White people say, ‘It’s history!’ The problem with history is it’s filled with so much injustice. Everybody walks around here with nickels in their pockets, and they never paid attention to the fact that on the back is a slave plantation, Monticello. Racism is deeply rooted in the American dream.”

Both Walker and Hunter said they only learned of Jefferson’s darker side after their time at his namesake high school.

“I graduated in 1961, and nobody told us who Jefferson was, what kind of man he was,” Walker said.

“They didn’t tell us he was running a personal prison of 600 slaves at Monticello” or raping and fathering children with his slaves.

He added, “I’m fascinated by symbols, and I remember I was shocked that there were so many slave traders’ faces on our money. Why are these the kinds of symbols that our nation is circulating? It just seems like maybe it could the abolitionists or something, once in a while.”

The ubiquity of such symbols is “subliminally oppressive,” Walker explained.

In response, his community came together more than two weeks into protests against police brutality to perform their own symbolic rejection of systemic racism.

“The U.S. military was toppling statues of tyrants in foreign lands, what kind of message is that sending home? ‘It must be okay,’” Walker said.

But the act itself was more celebratory than angry, as he described it. 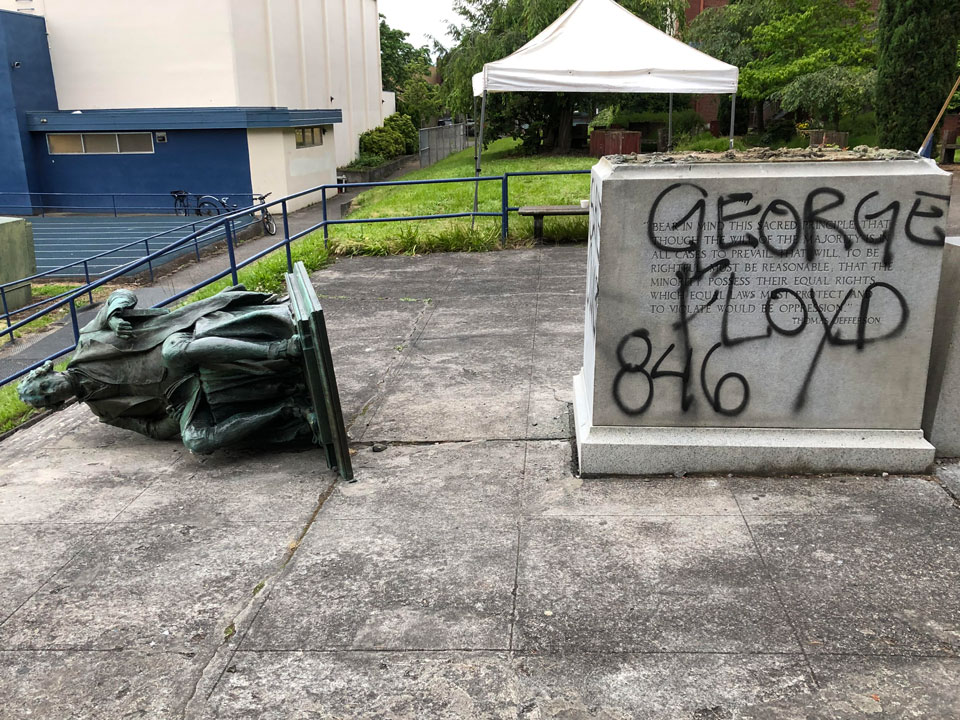 The base of the Thomas Jefferson monument in front of Jefferson High School in NE Portland was marked in rememberence of George Floyd. The statue was toppled Sunday night, June 14, 2020. (photo by Kymberly Jeka)“It was jubilant,” Walker said. “And the people, the crew, the members of the committee who committed themselves to the actual extraction, bringing it down, had to work very, very, very hard to do it. I estimated it could have (taken) a half hour, 40 minutes, because there weren’t any engineers in the group, and the statue wasn’t designed to come down easily. And I was amazed by their persistence, and them overcoming the challenge. They really wanted that statue down.”

In a video, protesters are seen pulling on rope that is tied around the neck of the statue, while another protester hits at the base of it with a mallet. The statue falls off its pedestal, which was spray-painted with the phrase “slave owner” on one side. On another side, an etched Jefferson quote is obscured by the phrase "George Floyd 846" -- a reference to the eight minutes and 46 seconds George Floyd was pinned to the ground by the police officer who killed him.

The bronze Thomas Jefferson statue is one of three replicas of a design by sculptor Karl Bitter. The original in Cleveland, as well as two other replicas in Charlottesville and Brooklyn, were still standing as of press time.

The statue was dedicated in 1916, having been purchased by students, alumni and members of the school board eight years after Jefferson High originally opened as Albina High School. In 1909, the school district decided to rename area high schools after U.S. presidents.

Hunter pointed out the distinction between keeping such relics in museums versus giving them a central position that makes them part of the fabric of everyday life for students.

“Even when I was going to Jefferson, I had no idea that the slave master was looking over his plantation,” Hunter said.

“I wouldn’t consider him a good man.”

Hunter added, “I know that somebody took a hammer and broke the nose off, dented his eyebrows, so the statue has been damaged. It would be a slap in the face to repair it and put it back up.”

An emailed statement to The Skanner indicated the district has no plans to re-erect the monument.

“The statue is currently removed from the campus,” Karen Werstein, public information officer for Portland Public Schools, told The Skanner. “We understand that what occurred Sunday night is part of an important larger conversation happening nationally and locally.

"We stand ready to listen to the school community about the appropriate way to go forward.”

Walker criticized the district’s response to growing calls to remove Jefferson’s name and presence from the school.

“Students of the Jefferson class of 2020 tried to let it be known that they would like to see the name changed, and nobody listened to them,” Walker said.

Walker said he was honored to be invited to sit on top of the downed statue he had passed by every day of his high school career.

“I was humbled by it,” Walker said. “I’m excited to see the youth step up, and I’m hopeful. I was kind of scared about the kind of world we’re leaving the kids. But they’re not waiting for us to leave them anything; they’re going to take it and make it right.”