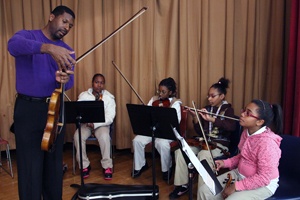 The Ritz Chamber Players, the nation's first chamber music ensemble comprised of musicians spanning the African Diaspora, made their Seattle debut performance at the University of Washington Tuesday night as part of the UW World Series program.
During their stay in Seattle, the RCP served as ensemble-in-residence went into several schools this week including T.T. Minor, Leschi, Thurgood Marshall and Brighton Elementary as well as the African American Academy teaching and exposing children to classical music. Their work includes educational activities, master classes, professional mentoring, coaching activities and discussion sessions.
The RCP hope to expose youth and others to African American classical composers and highlight the work of African American musicians in the classical music genre.
"This is to help inspire and show kids the possibilities they have in life," said Artistic Director Terrance Patterson. "It's a great thing to be a role model, talk to the kids and let them know if you work hard you can accomplish whatever you choose to do with just a little effort and hard work."
Made up of some of the most accomplished musicians, the RCP have performed with prestigious musical organizations such as the New York Philharmonic, Boston Symphony, London Orchestra, Philadelphia Symphony and Pittsburgh Symphony.
Founded by Patterson, a clarinetist, in 2002, the RCP are based in Jacksonville, Fl., and perform a landmark subscription series at the Times-Union Center for the Performing Arts that hold educational programs in schools throughout the district. The RCP perform works from traditional European repertoire, as well as perform contemporary work by African American composers during each performance. The ensemble highlighted the work of the late African American composer Coleridge Taylor-Perkinson who was the first Composer-in-Residence of these artists. Perkinson was in the process of writing a piece for the RCP when he died in March of 2004. Having only finished about 4 minutes of it, the RCP finished it for him and performed the piece Tuesday night. "It's a beautiful piece," Patterson said. "We even do programs of Black women composers, bringing that forth, so it's really exciting to share those with the public."
Every year the RCP has a different living Black composer-in-residence with them.
"We always play a lot of their music throughout the season," Patterson said. "There are a lot of Black people that are writing classical music, so it's up to us to continue to play it."
Patterson, who first started playing the piano, went to a prodimately black high school in Jacksonville and when he went to school at the conservatory, he saw few faces like his and wants to heighten public awareness about classical music in the African American community.
"We do a lot of outreach in addition to concerts, even though were less than 3 percent of representation in this field, we feel we need to expose African American youth to classical music," Patterson added. "To go into classical music, it was something different; it takes special training and exposure so that's why we feel like doing this type of work is really important."
Some of the RCP who performed included Tai Murray, violin; Demarre McGill, flute; Amadi Hummings, viola; Tahirah Whittington, cello; Terrance Wilson, piano and Alison Buchanan, soprano. Each musician has their own successful careers, live in different parts of the country but meet every season in Jacksonville to perform.
The RCP have toured the country extensively and made their Carnegie Hall debut in 2004 and were featured performers at the 2006 37th Annual NAACP Image Awards. Recently, they made their international radio debut broadcast to over 40 countries over the BBC World Service and WNYC New York. They have also been featured performers at the Madison and Amelia Island Chamber Music Festivals.
"The residency is an important chance for kids to see professional musicians who look like them and gives them the opportunity to get hands-on help," said Alice de Anguera, director of education for UW World Series. "These classes show students that classical music is an exciting genre and option that is open to them."
"It gives them the sense of possibility with music," said instrumental music teacher Walter White who has been teaching in the Seattle Public Schools for four years. "Having the RCP here is great because the kids have a chance to sit down with professional players, you've got professionals here helping kids with everything from their bowing, position, their posture and how you make specific sounds come out of an instrument."