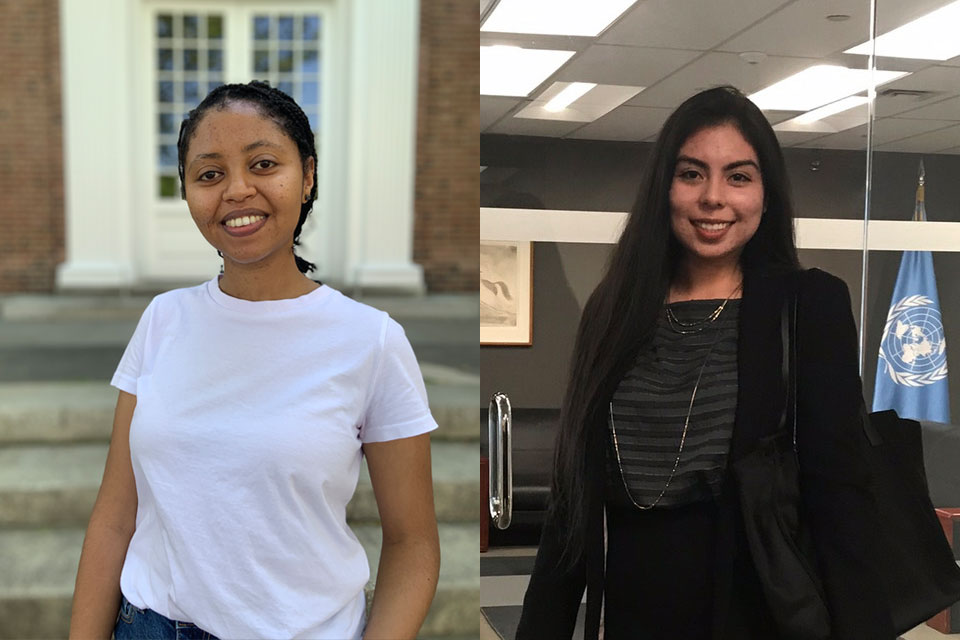 Amidst widespread uncertainty for many students navigating the pandemic, two De La Salle North Catholic High School alumni are forging exciting paths in science and the humanities. They spoke to The Skanner about their years at DSL, and how the school’s commitment to service influenced them in their own scholarship, years later.

A 2014 De La Salle North grad is headed to the celebrated David Geffen School of Medicine at UCLA -- and she’s already equipped with a Master of Science in Quantitative Epidemiology from Dartmouth.

Enat Arega and her family moved to the U.S. from Ethiopia just over a decade ago, and Arega entered her freshman year at Jefferson High School knowing very little English. By the next year she was proficient enough to study outside of ESL classes, and felt herself drawn to DSL.

“DLS has a strong commitment to serving, with very great support systems and extracurriculars,” Arega told The Skanner. “I also very much appreciated being able to work part-time. Everyone at DLS works once or twice a week to cover part of their tuition, and the program helps build professional skills, and gives students a chance to learn outside of the school environment

It was something that stood out on college applications, because most people our age wouldn’t have this on their resumes.”

Through DLS’s Corporate Work Study Program, Arega worked at Portland Providence Medical Center during her sophomore and junior years. Stocking supplies and working around the nurses’ stations gave her insight into how a hospital operates, she said. Her senior year she was assigned to OHSU, where she worked at the Knight Cancer Hospital and Treatment Center, supporting clinical trials by auditing studies and participant paperwork.

“That one was most instrumental for me,” Arega said. “Being able to work as a research assistant during my senior year is something I’m very, very grateful for, especially as someone who is thinking about doing research in my career.”

Arega said that at the time she had been considering a profession in either medicine or engineering. Her work experience in hospital settings stoked her interest in medicine, and taking biology classes at Dartmouth on the pre-med track solidified her decision to become a healthcare professional.

“I enjoyed the sciences, but for me it was also realizing the power you have as a physician, and in the U.S., realizing that health care is not accessible to everyone, and knowing there are disparities in health care,” Arega said.

“It’s most important for me to have that power to serve these communities.”

While at DLS, Arega focused on applying to smaller schools that offered enough financial aid. Dartmouth, with just over 4,400 students and a research hospital and medical school on-campus, felt like a fit. After she graduated, she stayed two more years to complete her masters.

“I truly do believe that schools can make a difference,” Arega said.  “I don’t think if I went to another high school, to be honest, I’d be able to get where I am now. The support from my teachers, I can’t even express. The college counselor (Barbara) Ward is an amazing human being -- she was supposed to retire seven years ago, but she’s still there. All the support definitely put me on this path.”

That path will lead her to West L.A. this August, to a program that has about a two-percent acceptance rate.

“Epidemiology is the study of diseases, and I try to understand the distribution of diseases, cause of diseases,” Arega said when asked what medical focus she was considering. “I’m very open-minded at the moment, and very excited to look into all specialties. I’m considering oncology.”

Diana Rivas Garcia moved to Oregon from Mexico at the age of 10, and credits that experience — along with De La Salle North’s unique work/study program — for nurturing her interest in international relations and economic studies.

Under DLS’s Corporate Work Study Program, Garcia worked one day a week, and three summers in a row, as part of the administrative support unit at the offices of the Oregon Department of Transportation. ODOT contributed to her school financial aid package.

She did this for all four years of high school.

“I liked it because they really exposed me to a professional work environment,” Garcia said.

“It made me feel a little bit more responsible too, because I had to go and be an adult, even though I wasn’t an adult yet.”

Her duties included processing invoices, copying meeting materials, and at one point, during a road expansion project, researching and reaching out to the family of someone who had died there, and whose memorial would need to be relocated.

Garcia realized she wanted to go into government work herself, but also wanted to have the option of working in the private sector. Her participation in the school’s chapter of Minds Matter National, a college prep program for lower-income students, gave her an even wider geographic focus: By attending school every Saturday from her sophomore through senior academic years, Garcia received SAT preparation, mentoring, and the opportunity to travel to accelerated summer programs, paid for by the program.

“The summer after my sophomore year, I went to Fordham for 10 days for a business program,” Garcia said. “My junior summer I went to South Korea for six weeks. It was a really great benefit for going to school extra.”

As a result, she double-majored in Chinese and was a joint international relations and economics major at Lehigh University in Bethlehem, Pa. — “the city where they made the steel for the Golden Gate Bridge,” she said.

After graduating last year, Garcia began the exhausting process of applying for a prestigious scholarship through the Fulbright-Hays cultural exchange program, turning her attention to the Fulbright-García Robles Scholarship. Within the program, Garcia will move to Mexico and spend 20 hours a week as an assistant English teacher, and an additional 20 hours a week on her own work.

“I chose a socioeconomic research project,” Garcia said. “I want to engage with different families in Mexico to find out what kind of economic activity they take part in — formal economy, informal economies; the tools they use to save money, and how that translates into the education of the children in that family.”

Working with the Office of Fellowship Advising, Garcia said she went through about 20 drafts of her project proposal as she honed in on what was feasible for her to accomplish given the time allotted and her admittedly limited experience conducting research on her own. As she progressed through rounds of practice interviews and formal questioning — much of it in Spanish — she experienced an intense three months of explaining why she wanted to be a cultural ambassador from the U.S. to her native Mexico.

In April she found out she would be a Fulbright Scholar. Unfortunately, due to the COVID-19 pandemic, her date of departure has been delayed from August to January 1 of next year, with her grant period still ending next May.

“Now even if I do get to go, it’s going to be very different results because of the coronavirus and the economic impacts it’s had,” Garcia said.

Still, she is eager to go — whenever that may be.

“I want to help myself get better so I can help even more in the future,” Garcia said.