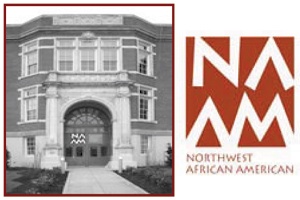 After nearly a generation, a community-wide dream has finally become a reality.
The grand opening of the Northwest African American Museum will be held from 11 a.m.-4 p.m Saturday, March 8 in the former Coleman School, located at 2300 S. Massachusetts St., in Seattle's Central District.
The grand opening celebration kicks off with a ribbon-cutting ceremony, free public tours, live music, children's art activities and more. Some of the dignitaries slated to attend are Mayor Greg Nickels, King County Executive Ron Sims, Sen. Jim McDermott and Joyce Taylor, anchor from KING 5 TV, will emcee the event.
The three-story school building, built in 1909, was closed in 1985 when Interstate 90 was expanded nearby. By November, local activists moved into the building demanding it be turned into a museum and community center. After eight years of occupation, the school district agreed the building would become a museum. Years passed while disagreements abounded between two groups who claimed they represented the museum. Finally, in 2003, the Metropolitan Urban League of Seattle, under the leadership of CEO James Kelly and the board of directors, purchased the old Coleman School for $800,000 from the Seattle School District.
"There have been a lot of people involved over the years when people started thinking about doing this museum," said Carver Gayton, executive director of the museum. "When the building was abandoned there were numerous people in the community who felt as though it would be the perfect place to have a Northwest African American Museum in the Northwest so there's been various committees and mayors involved in this process."
Gayton, a former Boeing executive and educator, took the job in February of 2005 and said he wouldn't take the job unless Barbara Earl Thomas, a nationally recognized artist, writer and protégée of Lawrence, was involved. Thomas has over 25 years of experience in arts administration and marketing including former program director for the Seattle Arts Commission, and is the museum's deputy director and curator of programs.
Gayton said when they started off there wasn't quite $4 million secured for the effort, now the $22.6 million dollar project is ready to open.
"We really see ourselves as the stewards of the community, there have been all sorts of folks who have meet, different boards and committees, for over 25 years and these individuals put in a lot of time and strong commitments and we've just building on what they did in the past," Gayton added. "We're very pleased that we've been able to get this together and I think the community will be pleased with what has happened, we've continued on in the effort and we can say we've done it!" Gayton said. "I think it will be a great deal of pleasure not only for the African American community but for broader Seattle community and the Northwest, because the focus is on the Northwest. We're connecting with communities throughout the region including the Tri Cities, Spokane, Portland, Vancouver, and Idaho connecting with the Black Heritage Society among other groups to make sure we're telling the Northwest story, not just Seattle's."
The 19,000 square-foot museum is located on the main floor while the two top floors have 36 apartments for medium income families. The museum has three galleries: The Northwest Gallery, the Journey Gallery and the Multi-Purpose Gallery.
The Northwest Gallery will house temporary exhibits featuring early pioneers, cultural icons and community leaders; the Journey Gallery features long-term exhibits and will tell the story of how African Americans arrived in the Northwest starting in the late 1700s; and the Multi-Purpose Gallery will host a variety of exhibits, lectures and performances.
The Northwest Gallery, about 2,400-square feet, is the largest gallery and will house the works of Seattle's prominent African American artists' painter Jacob Lawrence and sculptor James Washington Jr., through February 2009.
"We spent months talking going out into the community talking with various groups on what should be in that exhibit so it should be fun to look at and talk about the lives and works of these great local artists," Gayton said.
In the Multimedia Learning Center, people will be able research local Northwest history and trace their own roots. Two others rooms will be artists' studios and additional rooms will be available for meeting space, programs, activities, lectures and workshops.
The museum will also feature interactive displays, personal memorabilia from prominent African American Seattleites, exhibits, artifacts, photographs, gallery talks, docent-led tours, educational workshops and more.
"We will have a lot of material even though we're not a collecting museum, we'll be gathering and have gathered, information, artifacts and materials from the community as well as borrowing from other museums in order to see those pictures and bring those stories to life."
To keep the visitors returning, the exhibits and activities will continually change. Future exhibits include "East by Northwest," an exhibit exploring the story of East African immigrants to the Pacific Northwest. The museum will also house a cafe and gift shop as well as their administrative offices.
The largest African American-owned architectural firm in the Pacific Northwest, DKA, was used to design the museum and apartments and Leajak Construction, also African American owned, was the prime subcontractor. Formations Inc., the exhibit designers, have 30 years of working with startup museums, most recently completing the Mohammad Ali Center in Louisville, Ky.
The NAAM grand opening week celebration offers free admission through March 16.
After that, admission will be $6 for adults, $4 for students and seniors, and free for children under age 5. The NAAM is open Wednesday through Sunday and free admission is offered the first Thursday of every month.
For more information, call the NAAM at 206-267-1823 or visit www.naamnw.org.