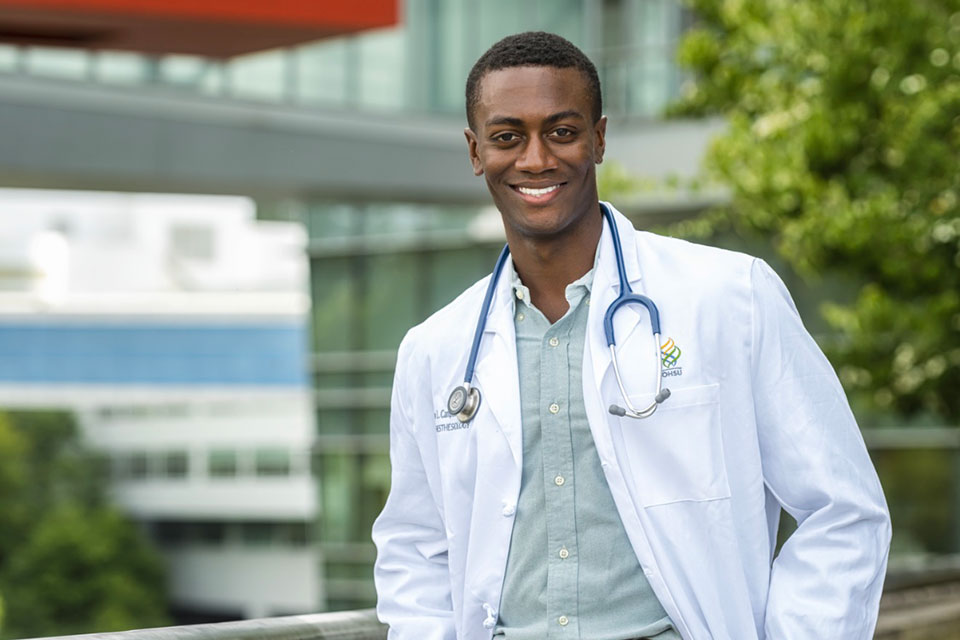 Jason Campbell, M.D., a 31-year-old anesthesiology resident at OHSU, has become known as the “TikTok Doc,” sharing short choreographed dance routines that he performs solo or with colleagues.

For him, the videos are about levity--but also representation.

“The dances are on my own time, I come in on days I don’t have to be in,” Campbell told The Skanner. “But the effect is, you can tell I’m a physician. If I’m just in pajamas, I’m just a Black guy in pajamas dancing, it doesn’t have the effect, the story that I’m going for: I want the young Black boy in Chicago to see that he can dance and have fun, and even be a physician one day.”

Campbell was already an active social media user, and maintains a blog where he writes about the victories and challenges of his experiences as a Black man in medicine.

“When used the right way, social media is an awesome tool, because it can reach a lot of people,” Campbell said.

“I’ve always danced, I've always been the person you've seen on social media. There’s no acting here. And when I’m with a patient one-on-one, it’s about the patient.”

This young woman named Tia has leukemia and she is in the hospital currently away from her family and children. She thinks she’s alone but I just wanted to remind her—she’s not! #beatcancer #strongertogether #tiktokdoc #leukemiafighter #danceismedicine pic.twitter.com/uMLeT95Kv6

Campbell said he gravitated toward OHSU in part for the diversity of its staff.

“It’s fortunate we have a lot of Black males in my program, arguably the most in the country,” Campbell said. 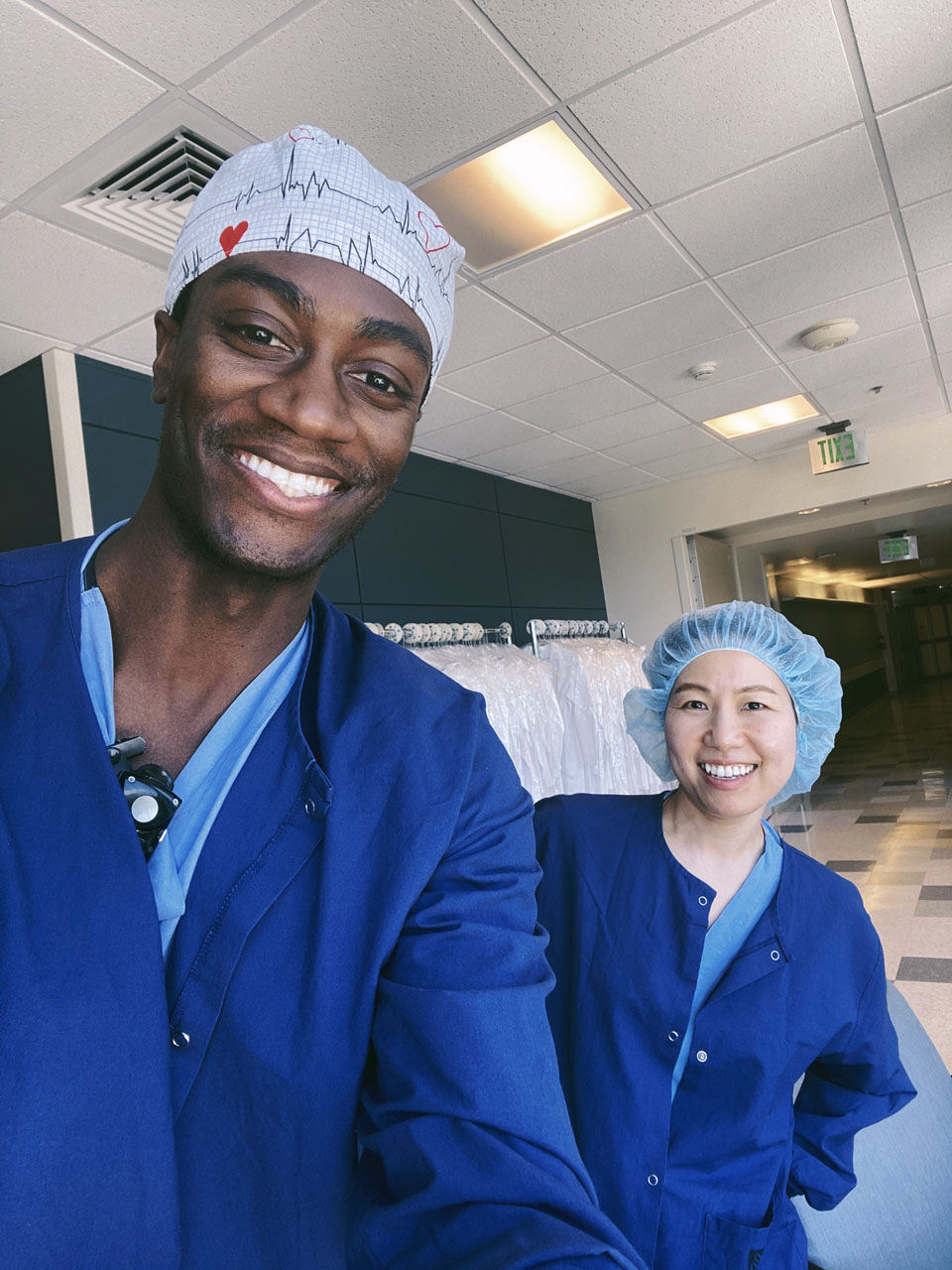 Dr. Jason Campbell, an anesthesiology resident at OHSU, became known as "the TikTok Doc" for his videos of dancing with colleagues. “And we have Black male staff anesthesiologists, so there’s a lot of representation, but how many hospitals would it be like, I’m the only Black cardiologist here? I’m the only Black doctor here? It’s very nice that I don’t have to feel that way. That’s another reason I chose to come to OHSU.”

“When I went down to Emory University in Atlanta, where I was for undergrad, I got more of a glimpse of what was an even more diverse setting,” he said. “It was more heavily African American in both the city and in being around some of the historically Black colleges and universities down there. I got a glimpse of more persons who looked like me but came from a different walk of life than I did.”

He took a year after graduating from college and before attending medical school to participate in the City Year AmeriCorps program, giving 1,700 hours of tutoring and mentoring services in a public D.C. high school.

“That was a very special experience, going from my private school education to come to this public school where motivation is lacking,” Campbell said.

“It’s always been my mentality that you have to achieve, so you can be in a place to help others do so.

"It’s just opening people’s eyes to things that they’ve never known to look for. That’s what has pulled me to my community outreach, and what I hope to do for the next 30, 40 years.”

In 2014, Campbell began his medical training at Ohio State, pursuing a calling that is arguably in his blood: His mother, Lucile Adams-Campbell,M.D., is an epidemiologist currently serving as associate director for Minority Health and Health Disparities Research at Georgetown University. She previously served as the director of the Howard University Cancer Center.

“She’s big time,” Campbell said. “I saw firsthand from her what she did for research and patients, especially for Black women as it pertained to breast cancer research. And I had this idea that you can really make a change, you can help this larger group of persons” -- even in a clinical setting.

Meanwhile his father, an attorney, was highly active in the community. Campbell says he saw both his parents’ strong call to serve. In the same vein, Campbell performs student outreach through educational Q & A’s with students, and by volunteering as a track and field coach at Roosevelt High.

“If you can meet them where they’re at, you can bring them to where you’re at,” Campbell said. “We’re going to start with track, but I’m going to talk to you about a thousand things. It’s talking with them, not even talking at them, and having that dialog with them is so necessary.”

Part of Campbell’s outreach has been enlightening students about anesthesiology, a field he has found gets limited consideration even among medical students.

“I was very much looking into becoming a trauma surgeon, caring for patients in a more acute setting,” he said. “Then I thought I could do some minority health disparities research, there’s certain types of violence, seemingly disproportionate effect on different races, and what I could do in that realm with gun violence.”

But as he grappled with the realities of applying for such a notoriously competitive field, Campbell recalled a rotation he’d had with pediatric anesthesiologists at Nationwide Children’s Hospital in Ohio.

“The surgery team and the surgeons have a pretty pointed goal: remove something that needs to be removed, fix something that needs to be fixed -- repair, remove, or replace, if you will,” Campbell said. “For anesthesiology, it’s maintaining stability in the patient’s hemodynamics, stability in their blood pressure, their heart rate, all those things to allow the surgery team to do what they need to do.”

He was especially drawn to the personal dimension of the job.

“You’re trying to earn someone’s trust in 5 or 10 minutes” prior to surgery, Campbell said calling it “anxiety-relieving work.” “It’s been super nice to have this one on one short but incredibly valuable and refreshing interaction, and that’s what anesthesiology and anesthesia really is.”

He points out that this has been a challenge during the pandemic.

“That’s why wearing a mask is killing me!” Campbell said.

“It’s safety first, but I miss the interaction we had before.

"With anesthesia, communication’s a big deal, and communication is a lot more tricky and tough when you have a mask on and more gear and (personal protective equipment), when we were dealing with patients that we’re unaware of what their COVID status was, back in March. To put the gear on is time-consuming, to remove the gear is nerve-wracking, to make sure you’re not contaminating yourself during removal. It’s another thing to crowd the mind when you’re trying to keep things as lucid as possible.”

Campbell wants to make sure that students considering a profession in medicine know about the kind of flexibility anesthesiology can provide.

“You can literally go into this field and then dictate what it is you actually want to do,” Campbell said. “If you say ‘Hey, I love cardiology. I love anatomy. I don’t want to be a cardiothoracic surgeon’ -- oh, how about being a cardiac anesthesiologist? I feel like a lot of medical students have been shocked by hearing this, and are relatively unaware of it.”

And Campbell wants students to know that while they should absolutely take their work seriously, there’s room for humor and human connection in hospital halls.

“I was a track and field athlete and Emory, and I’ve heard all the great coaches say that in a race, you don’t get extra points for making it look hard,” Campbell said. “If you’re relaxed, you’re probably going to perform better. It’s similar in medicine. People know you're a physician, they give you great respect, the scrubs, the outfit. You don’t lose it by showing that you have a humanistic and softer side.”