Black Leaders Call For Change in Policing, Change in Media Coverage of Demonstrations 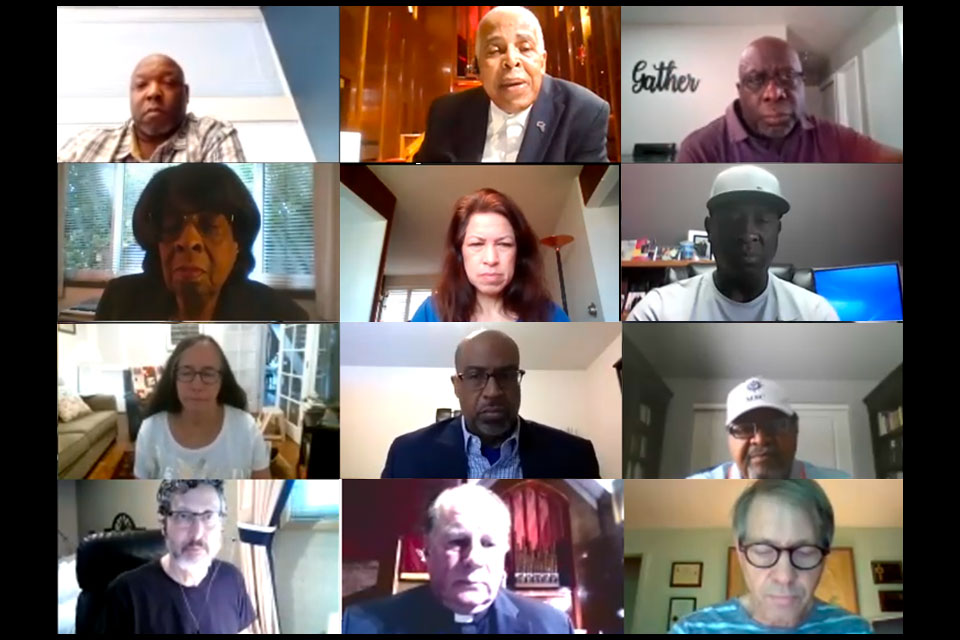 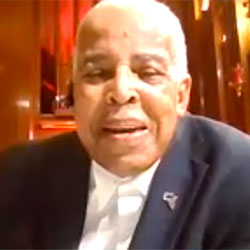 In this video screenshot is the moderator for the discussion, Pastor LeRoy Haynes Jr.As Portland prepared for a fourth consecutive night of protests against last week’s police killing of George Floyd in Minneapolis, a coalition of local religious leaders of color hosted an open conversation with members of the media, delving deeper into the pain of the Black community and urging for more thoughtful coverage of the death and the protests it has spurred nationally.

The Albina Ministerial Alliance of Portland’s Coalition for Justice and Police Reform has a long history of working on a deep policy level to effect change in local law enforcement practices, often in response to police killings. On Monday about 50 members of Portland-area clergy and area media signed onto the call.

“The clergy on this call represent thousands of people in this city, and the Black church has been a leader, as we all know, in this country on these issues for decades,” Pastor Mark Knutson of Augustana Lutheran Church, an AMA member, said.

“We would hope you would have the same fervor for seeing us resolve some of the issues in our community as you have for seeing the violence stop,” Pastor Roy Tate of Christ Memorial Church of God in Christ said. “We don’t like the burning down of our city, but we’re also concerned that once that is mitigated, (will there be) the same level of force, the same level of passion, to resist? ...What we would hope for is the same attention, the same passion, for as we begin to address and redress the issues that are systemic and beneath this, we would like to see the same fervor on the part of the media.”

“I feel that we are jeopardizing the health, mental health, of our people, and I am speaking of Black people,” Osborne said. “We jeopardize their health when we shut in everybody. I know we’ve been shoved in because of COVID.

"But we’re shutting in and causing everybody to be locked in because of the people that are disrupting our community.

"And those are the individuals we go after with fervor.”

She urged using “that same fervor to help these individuals when we have these shootings, and the disparity of the races.”

“I believe God’s on our side, so people better get it right,” Osborne said. “And that means get the people that are the individuals that are wrecking our cities, and leave us alone and give us some peace. And that means for the police to shove off.”

Many, like Pastor Lynne Smouse Lopez of Ainsworth United Church of Christ, pointed out that looting and destruction were often crimes of despair. Separately, Portland Commissioner JoAnn Hardesty took the media to task for its focus on property damage.

“We have people that infiltrate these protests for the sole purpose of creating violent interactions and destruction,” Hardesty said in an interview with KGW8 on Monday. “This is happening all over the country.

"Provocateurs have been known to go into peaceful protests and start the violence. And this is what we’re seeing.

"Even the police have confirmed that we have White nationalists and White supremacists that are really leading the violence charge.”

She added, “African Americans know how to peacefully protest, and we’ve been doing it forever. And so to blame us for the destruction was really frustrating. What I hope the media will do when they talk about this violence -- because what I saw on Friday was primarily young White men that were the extremists on our streets. So when we talk about what’s really happening, please add that historically, there have been provocateurs always that show up at peaceful protests, and they are the ones that create the violence.”

Sunday night, police officers in Portland took a knee in what seemed like a show of solidarity with the protestors -- a gesture that was repeated by law enforcement in many cities, but which has been criticized for being performative, as it was often followed by violent crowd-dispersing activities.

“Although I am appreciative of the symbolic gesture of the PPD going down to one knee, I’m far more interested in their willingness to have some oversight as it pertains to their relationship with the citizens that they are charged with protecting,” Troy Tate, assistant pastor at Christ Memorial Church, said. “I wanted to point out that the PPD currently is in negotiations that have their contract extended or approved...

"I would certainly appreciate if they would allow some oversight in their next contract negotiations.

"I think that would go a long way to show the people that they’re genuinely concerned and sincere about their relationship with the people, and they’re not just taking a photo opportunity to look good. I would really appreciate them allowing some concessions in their next labor (over) taking a knee and taking some photos with some protestors.”

“We have been meeting day and night for nine months with Commissioner JoAnn Hardesty, and preparing advocacy for forming the police union contract,” he said. He argued that due to the nature of Portland’s current police officer union contracts, the four officers involved in and subsequently fired for George Floyd’s killing in Minneapolis could not have been dismissed here.

“The officers would have been put on administrative leave with a desk job, and getting paid while the (investigation) process continued,” Haynes said.

Haynes said the AMA had been pushing for cases to be handled by independent district attorneys, and urging the establishment of an independent citizen review committee that would have subpoena power.

“You have to hit it at all different angles,” Haynes said.

Asked how the city and community could move forward, Haynes said, “I think, first of all, it’s going to take a commitment towards making this a priority in our city. Many of us have been with this issue since 2003, and continue to be advocates for justice and police reform. Sometimes it is taken very lightly and pushed back by city council, and just not being a major priority in the city.

Haynes added, “It requires a commitment by everyone. Not just by those that are advocates for justice and police reform -- by the city, is a necessity. Then to push the issue of police accountability. We’ve never had an officer in this city go before the grand jury, and been rendered towards a trial, even though men and women have been shot  -- shot in the back like Aaron Campbell -- and this is an issue that has come to fruition.

"At the same time we want to say that it’s very important that nonviolence be in our city, that we protest nonviolently, and that we continue to engage the issue.”

Meanwhile, Commissioner JoAnn Hardesty spoke plainly about her disappointment in media coverage of the demonstrations, saying during a Saturday press conference, “This is about, how do you heal a community, that has been consistently damaged over and over and over again? I think the media could do a much better job of not trying to make it so simple. Right?

"Life is not Black and White. There’s a lot of grey and light.”

On Monday Hardesty spoke with KGW8, saying in summary, “The human story is, should someone die under the hands of the state for committing allegedly a crime -- we don’t yet know, we won’t know whether or not a crime had been committed. The important thing is, would you want your son, your daughter, your mother, your father, to have the experience that African Americans continue to have all across this country?”