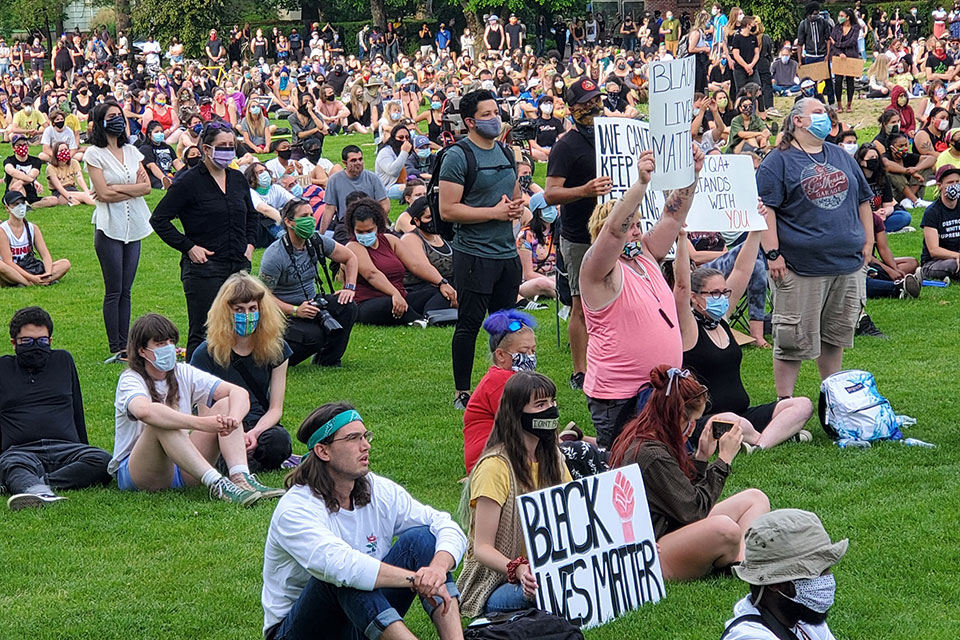 PORTLAND, Ore. (AP) — Portland, Oregon, will not impose a curfew on Tuesday night for the first time in four days after several thousand demonstrators remained largely peaceful during a march the night before to protest the killing of George Floyd in Minneapolis.

Mayor Ted Wheeler thanked protesters and organizers who kept an hours-long march and gathering peaceful and said he saw “a community ready for healing and reconciliation.”

The protest marked a turning point for Oregon's largest city after demonstrations the previous three nights spun into violence. Crowds set fires, shattered windows and broke into police headquarters and a corrections center during demonstrations over the killing of Floyd, a handcuffed Black man who pleaded for air as a White Minneapolis police officer pressed a knee against his neck.

“I know that if we truly want justice for George Floyd, we have a long way to go.

"I know that, but last night I saw a community that’s ready for both healing and reconciliation. I saw a progressive and mindful police bureau that deeply cares to to that work,” Wheeler said.

The evening was not without some violence, however.

Twelve people were arrested and two guns were seized from protesters, she said.

Mayor says his request was mischaracterized

A visibly angry Wheeler lashed out at Gov. Kate Brown for what he called her “mischaracterization” of his initial request for National Guard members to assist police. He had requested the Guard in a supportive role, to protect critical buildings, and not for crowd control or to make arrests, he said. Brown had told reporters that Wheeler asked her to deploy the Guard on the streets.

“Mayor Wheeler asked me over the weekend to mobilize the National Guard and put them in direct confrontation with protesters,” Brown said during a Monday news conference.

Wheeler said he called the governor after her remarks Monday and expressed his alarm.

“On an issue as sensitive as this, we have to, as leaders, get the facts straight," the mayor said Tuesday. "'And the idea that I would ask the (governor) for the National Guard for the purpose of direct confrontation with demonstrators on the very same day that Trump said the military should be deployed into states to crush even peaceful demonstrations is incendiary.”

Brown's office did not immediately respond to an email or phone call seeking comment.